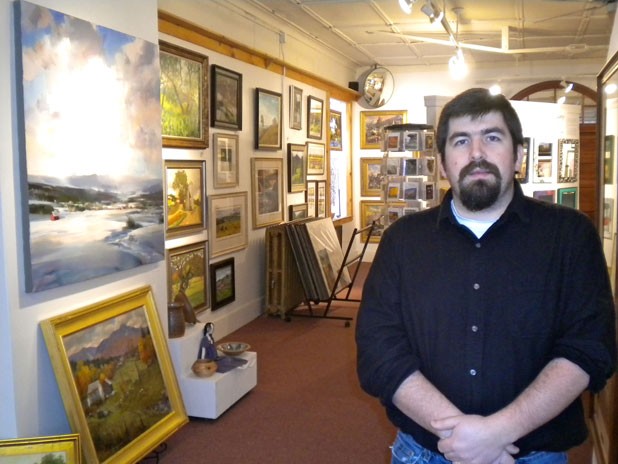 On the penultimate day of 2011, Dan Pattullo looked out at St. Albans City’s Main Street from inside his Village Frame Shoppe & Gallery, his hands tucked in the front pockets of his jeans, and happily anticipated the new year before him.

Pattullo purchased the framing end of Norm Choiniere’s former Champlain Collection in 2010 and added the gallery in March. It stands apart from other galleries, he believes, because established Vermont artists — such as Corliss Blakely, Sean Dye and Peter Miller — share wall space and display cases with emerging Franklin County artists, including Janet Bonneau, Patrick Murphy and Jon Young.

The new year is now under way. And, shortly after having added “gallery owner” to his resume, Pattullo is physically expanding the Village Frame Shoppe — by 700 square feet, with his landlord’s backing — to accommodate the 150-member Northern Vermont Artist Association’s first-ever St. Albans show, scheduled for March.

But Pattullo envisions turning his gallery into something more than just an exhibition space: a community art center. The feedback so far suggests his plan is welcome and feasible.

Pattullo currently offers custom framing and photo restoration to his 40 member artists, as well as to the public. With the recent addition of a part-time graphic designer, Chad Bourgeois, the gallerist can also help his artists create “identity packages” that include promotional materials and websites.

Devising a fee/commission structure is the toughest aspect of running his gallery, Pattullo concedes.

“Some artists would rather rent space, while others would rather just do the 40 percent commission,” he notes. “But we have certain criteria that need to be met for both options.”

Occasionally, Pattullo shows his own paintings and photos at the Shoppe. A homeschooled child — as are his own five children, ages 2 to 9 — he was born in the state of Washington and raised by his mother, Mary Raiche, in Highgate.Throughout childhood, he enjoyed archaeology and history, Pattullo says. He developed a passion for art in high school.

“I became excited about the ability to create a painting or drawing on a blank piece of paper,” he recalls. “It became a challenge to try and push myself to see how far I could go on the next project. It’s exciting to watch a painting develop.”

Pattullo earned his high school diploma at age 16 and took art courses at the Community College of Vermont. He started framing for Choiniere at Champlain Collections in 1995 and stayed until 2006.

“Norm was a good mentor,” Pattullo says. “It was a good connection. We worked well together. What I learned most from him was a good understanding of the limited-edition print market, and what the different edition types are.”

From 2006 to 2010, Pattullo and his wife, Nahtanha, owned a gallery and gift shop in the Boothbay Harbor area of Maine. Despite Nahtanha’s love for the state, the couple learned a key business rule the hard way: Location is everything.

“We were on a busy road, but everyone was driving by to get to where they were going,” Pattullo explains. “It was hard to get people to stop. Now, we have great visibility in a downtown.”

He admits that returning to St. Albans to buy his former boss’ business felt a little strange. “But I think it was a good business move,” he says.

In addition to developing relationships with local artists, Pattullo says he enjoys interacting with second-home owners who sometimes have impressive art collections. “I had a guy tell me that he has a Salvador Dalí original at his place in California,” he notes.

After the NVAA show, Pattullo will capitalize on his newly enlarged space by moving his framing shop to the back and the exhibition space up front.

In late April, the Village Frame Shoppe & Gallery will host the second annual Sappy Art Show during the 46th annual Vermont Maple Festival. Last year, Pattullo displayed 50 maple-themed pieces from artists all over Vermont (and one from Massachusetts).

“That’s going to become a good annual show,” Pattullo says. “It brought in a ton of traffic last year. I’m really excited about bringing art into this community.”