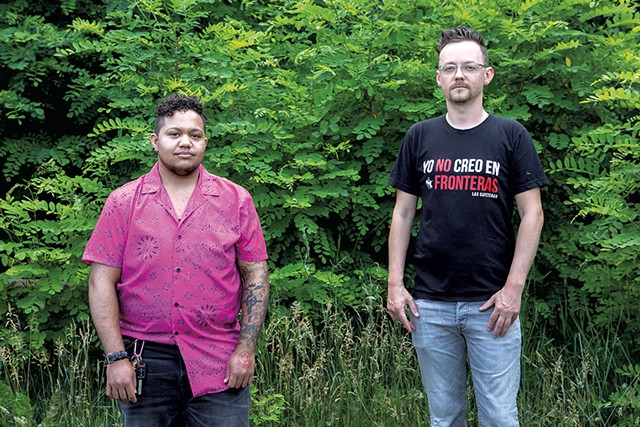 Like postcards in any Vermont gift shop, Daniel DeMasi's Instagram account features covered bridges, white steeples and sylvan homesteads, each captioned with brief historical notes. Lately, DeMasi has used his Southern Vermont Living page to showcase the stone arch bridges that have spanned the region's streams for more than a century.

But when he posted a photo earlier this month of one charming 15-foot-long arch in Townshend, DeMasi didn't feel comfortable printing the brook's name. He typed an ellipsis in place of a word he considers a racial slur.

"Words like these are hurtful," DeMasi said, noting that he comes from a multiethnic household, "and when I hear them, I just think, Why?"

Negro Brook, which flows down Bald Mountain in Townshend State Forest northwest of Brattleboro, is a vestige of race-based place-naming conventions that were pervasive until the civil rights era. Hundreds of mountains, rivers and places around the United States still carry official names that are either overtly racist or include outdated language increasingly considered derogatory.

In recent years, Townshend's Negro Brook moniker has fallen out of favor. Vermont State Parks officials have already removed the name from some maps and signs, and it is not used in trail descriptions at Townshend State Park, where the stream flows by the campground entrance. "We think it's offensive," said Tim Morton, a stewardship forester with the Department of Forests, Parks & Recreation.

But an effort to formally rename the brook has been stalled by a surprisingly fraught question: Rename it to what?

No other federally recognized geographic feature in Vermont bears a racial signifier, according to a 2015 analysis by online news site Vocativ that compared a list of racial slurs to a U.S. Geological Survey place-name database.

Last year, Burlington resident Evan Litwin, who studied the state's social geography as a University of Vermont undergraduate, learned of Negro Brook after reading about race-based place names. Excited by the idea that Vermont could shed its last such name, Litwin formed the Rename Negro Brook Alliance to push for the change. Alex Hazzard, Litwin's coworker at the UVM Prism Center for queer and trans communities, joined him.

Hazzard, who is Black, said the name sends an unwelcoming signal to people of color.

"Having something called Negro Brook in the state of Vermont means people are OK with that," he said.

By state law, the seven-member Vermont Board of Libraries reviews all requests to change geographic names. Petitions must include 25 handwritten signatures and must propose a new name. The board is required to give preference to labels that refer to historical events or persons, native flora or fauna, or to those that are "characteristic" to the state or local traditions. If the board votes in favor of a name, the application moves to the U.S. Board on Geographic Names, which controls federal nomenclature.

Having no personal connection to Townshend or its 1,100 residents, Litwin initially did not consider what to rename the brook. But soon historical researcher Elise Guyette caught wind of the initiative. For years, Guyette has been on a mission to recover Vermont's largely overlooked immigrant and Black history; her 2010 book Discovering Black Vermont traced three generations of early Black settlers in Hinesburg. Though their stories had been forgotten, the forested hill where the two families farmed in the 19th century was identified on local maps with a racial slur through the 1990s.

After hearing of the Townshend brook's name, Guyette studied census and other records and identified a Black family who lived in Townshend for several decades before the Civil War. Her preliminary research suggests that Susanna Toby, James Huzzy and their children moved to the area from Massachusetts around 1810. Huzzy was a Revolutionary War veteran who served two terms of enlistment as a substitute for his slaveholder's sons, plus a third term to gain his freedom. After he died in 1822, Toby continued living in Townshend, first on her own and later in the household of a white farmer. She died in 1855 at the age of 104, Guyette found.

"We don't want to jump on anything just to change the name of the brook." Robert DuGrenier tweet this

They weren't the only Black residents in Townshend at the time — census takers in 1810 recorded 15 — but the Huzzys appeared to have lived there longer than any other pre-Civil War Black families. Guyette contacted Litwin and suggested renaming the brook after Susanna Toby.

"I think highlighting her and her experience as a woman of color during this time would be fantastic," she explained in a recent interview.

Historical Society members were aware of Huzzy and Toby, but their earlier research indicated that the family lived elsewhere in town, not near Negro Brook.

In fact, vice president Robert DuGrenier said, Townshend history buffs have long pondered the origins of the name Negro Brook, which appears on historical maps as far back as 1854. Their periodic research, however, has failed to uncover any specific association with Black residents. The origin of the name remains a mystery.

"We're super interested in getting it right. We don't want to jump on anything just to change the name of the brook," DuGrenier said.

There is reason to believe that such an association is still waiting to be found. In northern states, place names often referred to locations where free Black families settled, State Librarian Jason Broughton noted, or areas where they passed en route to safe harbor.

That would distinguish Negro Brook from Vermont's most notorious place name debate 50 years ago. In the early 1960s, the federal government decided to wipe the N-word from all geographic features — in some cases inserting "Negro" as a replacement. Nonetheless, a mountain, brook and pond in Marshfield continued to carry the name "Niggerhead" for several more years.

A 1966 effort by civil rights activists to change the names was voted down by the Board of Libraries after more than 350 Marshfield-area residents signed an opposing petition. They claimed that the name was merely a lumberjack's term for a stubborn log.

A second push in 1971 by a Black-led group of UVM and Goddard College activists succeeded, despite continued public opposition. J. Paul Giuliani referred to the activists as "deluded do-gooders" in a letter to the editor published in the Burlington Free Press. Giuliani, a Montpelier attorney, told Seven Days last week that "of course" his thinking on the issue has changed.

"What was a local matter then, now is of universal interest," he wrote in an email. "What I can say is that no offense was intended."

Though the terms and tenor of today's Negro Brook discussions are different, questions linger about who gets to rename a place. The Board of Libraries wants Litwin and Hazzard to secure local support for their petition to avoid a contentious public hearing or a situation in which the board must choose between dueling petitions.

That's what happened in 2003, when two groups jockeyed over what to rename 14-acre "Negro Pond" in the Northeast Kingdom town of Westmore. The board selected "Mud Pond," which had some historical usage, over a proposal to name it after a former state legislator. Just last week, a Dorset angler penned a letter in the Bennington Banner suggesting that "Negro Pond/Mud Pond might better be known as 'Humanity Pond.'"

The Rename Negro Brook Alliance's initiative "is not coming from the local area," Board of Libraries chair Bruce Post said. "I want to be certain the folks who live down there are included in the process."

Litwin said his group shouldn't be seen as interlopers, given that the brook flows across state land for most of its course. He noted that state law does not require petitioners to live in the same town as the geographic feature they wish to rename.

"A lot of things wouldn't have changed, especially around race, were it not for 'outsiders,"' he said.

Hazzard and Litwin still hope to gather local backing before filing their petition to the Board of Libraries. They have contacted some social justice organizations in search of broader support, but their conversations with the Townshend Historical Society petered out last winter. "There is ... an opportunity for more communication and dialogue," Litwin said.

The effort comes as the historical society is dedicating most of its energy to raising money to preserve a series of stone arch bridges, including a small one that crosses Negro Brook. That bridge is known locally as the Negro Brook Bridge, and the society refers to it as such.

A Townsend Civil War veteran named James Otis Follett constructed the bridges between 1894 and 1911, decades after fighting at Gettysburg. If local historians can't link a Black family to the land abutting Negro Brook, historical society members have suggested renaming it after Follett.

"He wasn't a Black man, but honoring him makes sense to us also," DuGrenier said.

Petitioners believe it's essential to preserve the brook's implicit acknowledgment of the early Black presence in Vermont.

"Even history that we're taught in schools erases Black history altogether, so to rename the brook after a white person just really echoes that sentiment," Hazzard said.

"It's about making a statement that Vermont is willing to right some wrongs." Alex Hazzard tweet this

Guyette agrees. "Some of these place names, as horrific as they are, they help us understand something that is going on in the community," she said. "I think that relationship needs to stay."

Vermonters tend to imagine the state's history as one of white people who were early opponents of slavery, Guyette said. Roughly one in five Blacks in Vermont fought in the Civil War, but only one public monument — installed in Rutland last year — recognizes their contributions.

One Black Civil War veteran appears in a comprehensive Townshend town history, A Stitch in Time, published by the historical society in 2003. Winfield Scott Montgomery lived there for nine years following the war before attending Dartmouth College. The historical society has been working to commission a historic marker to honor him, DuGrenier said.

But the book otherwise tells the story of Black history in Townshend through its white abolitionists and its purported connections to the Underground Railroad.

Those who want the name changed see balancing the historical record as a step toward ensuring that people of color are equal community members across Vermont.

"This is more than just renaming some brook," Hazzard said. "It's about making a statement that Vermont is willing to right some wrongs and take ownership and recognize that we want to make a place for people of color in our state."