Race to Contain: A Nursing Home Is the Epicenter of Vermont's Coronavirus Outbreak 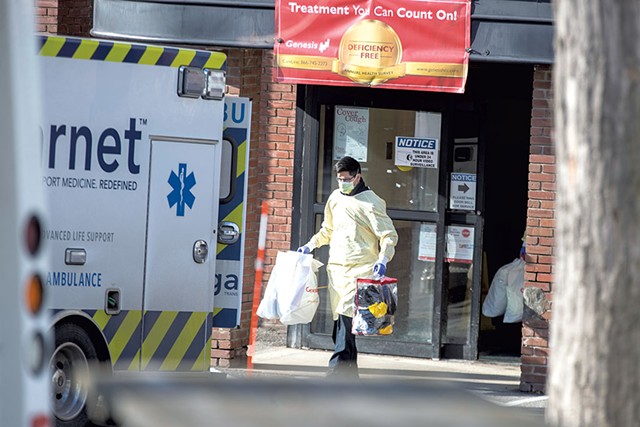 For seven long days, Albert Petrarca shut himself away in his third-floor room at the Burlington Health & Rehabilitation Center, hoping the deadly pandemic sweeping through the building would pass over his door.

The new coronavirus had infected at least 14 residents and two employees on the fourth and fifth floors, which hold the nursing home's frailest residents.

Spared, seemingly, was the short-term rehab floor, where 70-year-old Petrarca was recovering from foot surgery. For him and other patients, every hour became a gut-wrenching waiting game. Had the virus already spread to other floors, undetected? If not, could they get out before it did?

It just so happened that one of the people asking those questions was an old-school Queen City radical who had spent years doggedly protesting a Church Street mural — in other words, a patient who wasn't afraid to use his call button.

Petrarca grilled the staff about their response and even summoned the facility's director for answers. Then he began emailing city and state leaders with his urgent demand.

"How many more have to die before you get us the FUCK out of here," he wrote in one message to Mayor Miro Weinberger, who was the first public official to raise alarm about the outbreak.

On Tuesday, as the facility's fifth death was announced, Petrarca finally got his ticket out. The Vermont Department of Health began evacuating 10 or so patients from the Pearl Street home and taking them a little m ore than a mile away to the DoubleTree by Hilton on Williston Road. The University of Vermont Medical Center had agreed to take over their care at the hotel.

"This coordination will help to quarantine all discharging patients for a period of time before they can return to their home," Burlington Health & Rehab's parent company, Genesis HealthCare, said in a statement.

The chaos that COVID-19 caused at the nursing home showed how quickly the disease can overtake a vulnerable population living in close quarters. In just about a week after the first case was announced on March 16, the Burlington facility became the epicenter of Vermont's outbreak, accounting for at least 15 percent of the state's 95 coronavirus cases and five of its seven deaths as of press time Tuesday evening.

Fear, confusion and frustration mounted with each new positive test, as state infectious disease specialists and facility managers scrambled to contain the spread. And at least 14 staff were quarantined at home for two weeks as a precaution, forcing Genesis to bring in replacement workers.

While the evacuations granted those patients some measure of relief, most of the 90 or so residents at the facility remained on the more vulnerable fourth and fifth floors. And just as the evacuations got under way, reports emerged that a resident at another local eldercare home — the Residence at Quarry Hill in South Burlington — had contracted the virus after a stay at Burlington Health & Rehab. A spokesperson for LCB Senior Living, which operates Quarry Hill and two other facilities in Vermont, said it was unknown whether the woman was exposed at the Burlington nursing home.

The Quarry Hill resident has been in isolation and has shown only mild symptoms, the spokesperson said.

Genesis, one of the largest nursing home operators in the United States, has sought to assuage the fears of family members, who haven't been able to visit their loved ones for weeks, through twice-daily video calls with Burlington Health & Rehab management.

Peter Lavallee listened to several of the calls as he worried about his 80-year-old friend Robert Poulin, who lived on the fourth floor. The sessions began with managers detailing the latest number of cases and, eventually, deaths.

Lavallee, who held power of attorney for Poulin, learned March 17 that his friend of many years and fellow Knights of Columbus member was among the first at the home to test positive. Staff asked him to confirm his friend's advanced directives and said they were giving Poulin morphine for the pain.

On Sunday, the home called to say that Poulin had died.

By that time, Lavallee had seen photos on TV of a different resident who had also contracted the coronavirus. Lavallee said he recognized the man as Poulin's roommate.

The outbreak erupted despite assurances from both Genesis and state health officials that proper protocols were enacted as soon as signs emerged that the virus had arrived on American shores. Staff have been "hypervigilant" and followed health department directives "to the letter" since the first case was reported, company spokesperson Lori Mayer said.

A state epidemiologist went to the Pearl Street facility on March 19 to review the protocols and assess the scope of the outbreak. Health Commissioner Mark Levine also sought assistance from the Centers for Disease Control and Prevention, even asking whether the federal health agency could send a team of experts to Vermont.

The feds didn't believe such a visit was necessary, Levine said. "They continue to tell us that we have always been following their guidance and that we're doing a fine job," he said at a press conference Monday.

The emerging pandemic has already proven devastating to elderly residents at nursing homes across the country. More than a quarter of all U.S. coronavirus deaths as of March 20 involved eldercare residents, according to a Washington Post analysis. Life Care Center of Kirkland in Washington State was hit first; the virus has killed nearly a third of its 120 residents. At least 73 homes in 22 states have reported infections, the Post found.

"Kirkland, Wash., has been on my mind since I heard about this infection" at Burlington Health & Rehab, Mayor Weinberger said during a recent press conference.

Genesis owns hundreds of nursing homes and senior communities in 26 states, including nine in Vermont. The company reported $4.6 billion in annual revenue last year. Its declining stock, however, lost another third of its value last week, dropping to just $0.79 per share.

"We're doing everything humanly possible to protect everyone's interest," CEO George V. Hager Jr. said. "First and foremost, the interest of our patients and our employees and their safety."

In the days that followed, some patients, family members and staffers at Burlington Health & Rehab have worried that the company hasn't done enough to contain the infection. Their uncertainty is compounded by the fact that, even at the site of the state's largest outbreak, some residents and employees weren't eligible to be tested.

"After the situation in Kirkland, it should have been mandatory that when you've got a cluster like this, that you would automatically test everyone," said Petrarca, who was swabbed Monday for the disease but had yet to receive the result. "We should have learned that."

One staffer, who asked to remain anonymous because she is not authorized to speak to the media, said she worked directly with a resident who tested positive, but she was not immediately notified of that test result. She said she was later told her infection risk was low. She'd worn a mask and gloves, but not a gown, while caring for that resident. Staff weren't wearing them until the first coronavirus case at the home was confirmed, she said.

There have been scattered reports from residents and staff of employees not wearing proper equipment or working while ill, but Genesis and Levine have disputed those claims.

"We have been screening all employees for fever and symptoms since March 6, 2020, and log every screening," Mayer said. "Any employee who registers a fever or has symptoms is sent home immediately. In fact, we instituted this screening in advance of CDC guidelines in order to protect our patients, residents and employees as the pandemic heightened around the country."

Levine told reporters that his department had "found no fault in their infection-control practices or procedures."

The sheer speed of infection has created further confusion. The state announced the facility's first death, an elderly woman, before her positive test had even been publicly confirmed. Some families have been frustrated to learn of the latest developments through the media — or read news stories that don't include the most current figures because they haven't been announced.

Stacey Savage, whose mother was discharged from the third floor just hours before the home's first COVID-19 case was announced, said she didn't hear from facility administrators for days. When she eventually spoke to them, they told Savage that her mother's chances of contracting the virus on that floor were "slim," she recalled.

Others were relieved by the evacuation plan. Terry Melton's father was swabbed for testing on March 20. The result returned negative three days later. She said she tried to remain optimistic during the anxious wait, joking with her dad, who also received rehab services on the third floor, that she wanted to "break him out" of the building by using a ladder.

Melton, of Milton, said she was happy with the therapy her father had received but was glad to hear he may soon get to leave.

"I'm hoping they get out of there," she said.