Seven Quirky Roadside Attractions to Seek Out in Vermont

Vermont may be New England's only landlocked state, but highway motorists can still go whale watching. "Reverence," a pair of near-life-size granite whale tails, was created in 1989 by Vermont artist Jim Sardonis. Initially sited in Randolph, the tails found their eventual home as the centerpiece of South Burlington's Technology Park walking trail. (If you're driving by Exit 4, look for Sardonis' newer sculpture, the bronze "Whale Dance.") The presence of these marine mammals isn't really so outlandish: Beluga whale fossils have been found all around Lake Champlain, evidence that the Champlain Valley was once an inlet to the sea.

Find it: Along Flynn Avenue in Burlington

Towering more than 40 feet over an unassuming patch of weeds, this obscure obelisk is not an Office Space-style prank or the handiwork of a disgruntled Staples employee. Rather, it's a satirical sculpture by Burlington architect Bren Alvarez that comments on the bureaucracy of urban planning. Called "File Under So. Co., Waiting for...," it's a reference to the controversial Southern Connector roadway, now known as the Champlain Parkway. The 38 filing drawers represent every year from the road's 1965 conception to the cabinet's 2002 construction. Like the cabinet, the fate of the Parkway is still up in the air.

Find her: Along Route 7 in Leicester

It's impossible to miss Queen Connie, a gorilla hoisting an old Volkswagen Beetle into the air high above Route 7. And that's kind of the point: Sculptor T.J. Neil pitched the massive sculpture to Pioneer Auto Sales, the used car lot nearby, as a clever advertising gimmick. Sure enough, Connie — named for her concrete medium — has been turning heads since her construction in 1987. She even topped Car & Driver magazine's 1991 list of "Carchitectural Wonders."

Find it: Along West Shore Road in South Hero

Driving toward White's Beach in South Hero, it's hard to imagine that any vista could compete with the sparkling blue expanse of Lake Champlain. But just across the road, hundreds of brightly hued birdhouses hang in the trees, demanding attention and explanation. So here's the latter: The nearby homeowners started building birdhouses in 1996, hoping to attract tree swallows to feast on the fierce mosquito population. They dubbed the houses "Jelly Bean Suites" due to their candy colors. Never has pest management looked so sweet.

Find them: By the roundabout at routes 15 and 108 in Jeffersonville 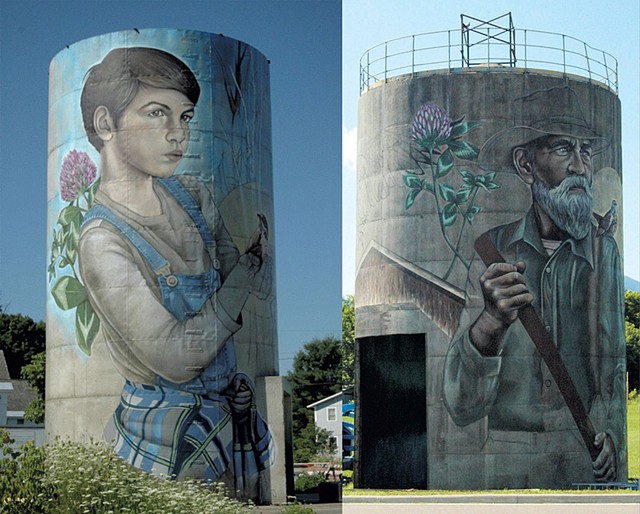 One of Vermont's largest outdoor murals is spread across two 36-foot-tall silos in Jeffersonville. It's a canvas well suited to the mural's message about Vermont's past, present and future: One silo portrays the face of an aging farmer, while the other shows an 8-year-old child. "The Silo Project," by painter Sarah C. Rutherford, brought new life to the old silos, which once belonged to the Bell-Gates Lumber Corporation, and put a community that was once easy to drive by on the map as a destination.

Find it: Off Route 140 in Tinmouth

No beanstalk is necessary to enter the land of giants — or at least that's what an art installation in Tinmouth seems to suggest. From the road, drivers can witness four massive wooden chairs gathered around a gargantuan boulder, which appears to be set for dinner, with tree trunk slabs for plates and birch cylinders for cups. This oversize landmark, known as Table Rock, makes an even larger statement: Lifelong Tinmouth resident Marshall Squier created the piece in response to the Iraq War, wishing that such conflicts could instead be resolved by sitting down peacefully at a table together.

Find it: Along Route 128 in Westford

When Westford town officials refused to issue resident Ted Pelkey permits to build an 8,000-square-foot garage on his property, he let them know exactly what he thought. Pelkey mounted a 6-foot-tall, 700-pound wooden sculpture of a raised middle finger on a 16-foot pole on his front lawn. How is a larger-than-life fist flipping the bird for all to see allowed when a garage is not? The $4,000 creation is considered public art. The gigantic gesture went viral after it was erected in late 2018; as WCAX-TV reported, musician Kid Rock caught wind of it and ordered his own. The other fist now resides in Nashville, Tenn.