Quiet Lion, Whatever You Say 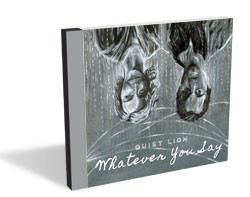 Since its inception, Jenke Records has served as a champion for Burlington’s musical underdogs. Founded by singer Tommy Alexander, the label represents a motley crew of songwriters, rappers and bands who succeed as much as a collective entity as individuals. That strength-in-numbers approach has birthed a considerable assortment of albums over the past two years, comprising a wide array of musical styles and philosophies. It’s an all-inclusive hodgepodge that, though sometimes uneven, has come to define the label’s identity.

Jenke’s latest release, Whatever You Say, by local duo Quiet Lion, is by far the label’s strongest to date. A full-length follow-up to QL’s self-titled 2012 debut EP, the album suggests not only maturation by the songwriting tandem of Alexander and Alanna Grace Flynn, but of the label itself.

Where much of the earlier Jenke canon seemed to delight in its own endearing inconsistencies, Whatever You Say is a focused and refined effort, a record that could serve as a jumping-off point for Jenke’s future success.

Of all of his various musical outlets, including as a solo artist and as part of the hip-hop outfit Set Up City, Alexander seems most at ease alongside Flynn. Either because her smoky, Natalie Merchant-esque alto softens his gruff, deliberate delivery, or simply because he’s become a more savvy writer (probably both), the slacker charm he’s previously hinted at is fully realized here. Especially on songs such as the vivid “100 Pictures” and the insanely likable title track, there is new subtlety afoot, both lyrically and melodically.

As she was on their debut EP, Flynn is Quiet Lion’s secret weapon. Her interpretation of the Alexander-penned “100 Pictures” is an album highlight. But she’s a formidable songwriter in her own right, and an even better singer. For example, “Waking Dream,” on which she duets with Waylon Speed’s Kelly Ravin, is simply a showstopper.

The result is an album that, much like Jenke Records itself, exceeds the sum of its parts. But what is especially notable about Whatever You Say, and what bodes well for the future of the label, is how good those parts have become, and how well they are beginning to fit together.

Quiet Lion release Whatever You Say this Tuesday, April 30, at Jenke Arts in Burlington. The album will be available for download at quietlionmusic.com.