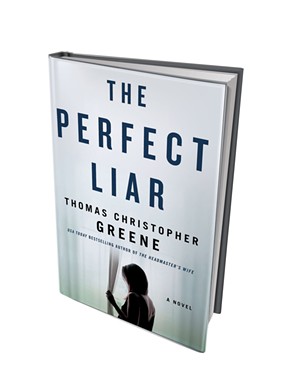 Susannah is #blessed. Her husband, Max, a sexy and wildly successful performance artist, has a teaching gig at the University of Vermont that comes with a house in Burlington's Hill Section. With her teenage son at school all day, Susannah seems to spend most of her time jogging by the lake, shopping at the farmers market or lovingly grilling local produce for her men.

But Susannah hasn't gotten rid of the "white bear" — the term her therapist (and first husband) used for her anxiety. Sporadic panic attacks still send her into a tailspin. And when she finds a handwritten note on the door of her perfect home that says, "I know who you are," the white bear attacks.

The Perfect Liar is the sixth novel from Thomas Christopher Greene, founding president of the Vermont College of Fine Arts, whose fiction has lately pivoted into domestic thriller territory. Here he uses the familiar device of threatening, anonymous notes to expose the cracks in a seemingly perfect marriage. This family has secrets, and the price of keeping them could tear it apart.

Late in the book, Greene drops a reference to The Talented Mr. Ripley; his story has already evoked thriller doyenne Patricia Highsmith, even if his style hasn't. Within the first few chapters, we learn that Max adopted a false identity in his youth. Further deceit helped him win Susannah, launch his art career (which itself is all smoke and mirrors) and get his UVM job.

Like Tom Ripley, Max sees his lying as self-realization: "He was born into the wrong family, into the wrong name, into the wrong identity. He didn't become a fraud, in his view, but emerged into the world that way fully formed." Also like Ripley, Max committed a murder on the path to his carefully constructed identity, and he's not contrite. To shield the fragile Susannah from knowledge of his past, he may even be willing to kill again.

Greene excels at atmospheric prose that is hypnotically repetitive, stringing action after action together by conjunctions: "he smiled at her that smile that made her forget everything and he looked tired and she leaned up and kissed him and he took her in his arms." When they aren't playing cat-and-mouse games, Max and Susannah have a lot of lovingly described meals and lyrically described sex. More than a breakneck thriller, the book can suggest Hemingway with a Lifetime plot and a Martha Stewart setting.

For all the prettiness, though, there's something twisted at the root of this love story. The spouses are perfect complements: Max a man who can turn anything into art ("You are the art," he tells his rapt audiences) and Susannah a woman who desperately needs "to be watched, to be gazed upon." In the novel's best passages, Greene makes their symbiosis distinctly creepy: "This was how they loved, she told herself. A small tribe, they were. No one was getting in." Unspoken is the implication that no one in this family unit is getting out, either.

Thriller fans will find that The Perfect Liar offers plenty of twists and turns, though some of the perspective shifts and other logistics could be more deftly managed. (Notes to self: Do thoroughly google search a prospective spouse. Do not take a potential enemy running at Huntington Gorge and casually remark that it's a very easy place to drown.)

While Highsmith might have presented the story's twists and reveals as ironies of fate and human folly, Greene's angle is more elusive. Max and Susannah aren't the kind of characters we root for, yet their pas de deux has a queasy, semi-romanticized fascination. Susannah seeks out men who dominate her, but her adoration comes with a price. Whether this makes her a femme fatale (as Hemingway might have suggested), a victim in need of empowerment (the Lifetime route), or just a very confused person is something the novel never quite seems to decide.

What she definitely isn't — in any simple way — is #blessed, and readers who enjoy both picture-perfect façades and their destruction should have a ball getting to the truths at the core of The Perfect Liar.

The original print version of this article was headlined "Quick Lit: The Art of Lying"