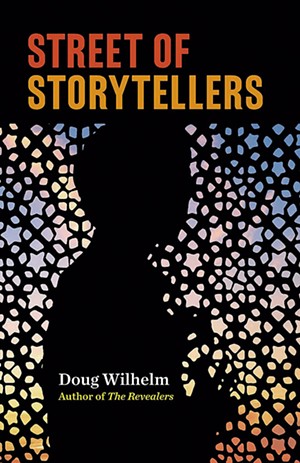 Teen angst is universal. Street of Storytellers, a 2019 young adult novel by Doug Wilhelm, is populated with young people facing problems — some interpersonal and some with huge consequences.

The story's protagonist is Luke, an American high schooler in Peshawar, Pakistan, on a court-ordered visit with his divorced father, who's working on a book about an ancient civilization. Luke resents his dad's work and knows little about the tensions that are building in Pakistan in 1984; he wants to listen to Bob Marley on his Walkman, not visit museums or ruins.

Then Luke is introduced to Rasheed, who's Pakistani and a devout Muslim. Convinced that the war against the Soviets in Afghanistan is holy, Rasheed is falling under the sway of a nascent jihadist movement in Peshawar. Rasheed's sister, Danisha, is unlike him in every way and eager to get an education, despite their society's restrictions on women. Another central character is Yusuf, an Afghani refugee with a disabled sister who worries about the extremists' growing power.

In the first chapter, Wilhelm makes sure readers grasp the historical context and the ramifications of the political tensions that the book describes. Rasheed's father, a professor, is trying to recall the name of a rich Saudi man who's in Peshawar talking about a jihad. Finally he remembers — it's Osama bin Laden.

What follows is a fictionalized account of the atmosphere that fostered bin Laden's power. Luke finds himself part of a jihadist plot and, when he defies orders, he sets off a chain of events that includes his own kidnapping.

Street of Storytellers is based on Wilhelm's two years in Pakistan, India and Nepal in the early 1980s. "I wrote a nonfiction book about my experiences in Muslim Asia, but nobody would publish it," Wilhelm writes on his website. He put the idea away for years. Then, "After 9/11, it became clear that the Al Qaeda movement, which brought down the World Trade Center, had originated in Peshawar in the 1980s," he wrote. "And I began to think about a YA novel, a sort of thriller set there and then."

Wilhelm's writing is clean and smart. When he describes a street bazaar or two people speaking in a "crackle-edged language," the setting comes to life. Though the book works hard to illustrate the complexities of another time and culture, Wilhelm's narrator is distinctly American — a wise choice in a time when the literary world is rightly questioning whether it's appropriate for white people to tell the stories of people of color.

Wilhelm is skillfully true to Luke's voice, even when Luke is being an idiot. At times, this reviewer wanted to take the teenage character by the shoulders and say, "Just tell your dad what's going on!" By contrast, moments when Luke thinks of his jihadist kidnappers as "wannabes and losers" were endearingly amusing. No one but an American boy could be so cluelessly defiant in the face of an existential threat.

The book also contains something of a story within a story about Peshawar's Gandhara region, which served as a crossroads of different cultures in the first through fifth centuries AD; from there, Buddhism spread through Asia. The book's afterword lays out a clear timeline of the Soviet-Afghan War and how American involvement directly led to the rise of Al-Qaeda, the Taliban and the Islamic State of Iraq and Syria, known as ISIS. While Luke's story features plenty of the sort of drama only fiction can provide, it's a good fit for the YA genre, with stakes set at just the right level to offer young readers an introductory lesson in geopolitics.

The original print version of this article was headlined "High Stakes"