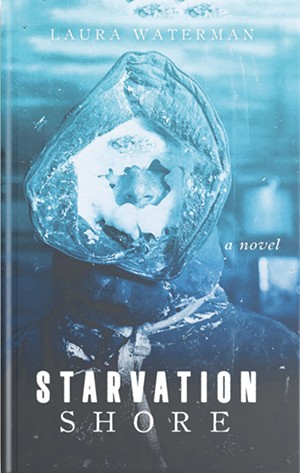 Nothing improves my attitude toward Vermont winters like a book about a doomed arctic expedition. Compared with the plight of starving people huddled in inadequate shelters at 50 below, scraping the ice off your windshield so you can go buy groceries seems positively decadent.

With Starvation Shore, East Corinth's Laura Waterman offers a harrowing vicarious trip to the Arctic Circle. A longtime hiker and homesteader as well as a wilderness ethicist and memoirist, the author brings her outdoor experience to bear on this tale of the Lady Franklin Bay expedition.

While Starvation Shore is fiction, it sticks close to facts; no monsters pop up here, as they do in Dan Simmons' The Terror, which concerned the earlier Sir John Franklin expedition. By the end of Waterman's book, though, readers will feel the terror just the same.

The facts of the expedition are stark and sobering. In 1881, Lieutenant Adolphus Greely of the U.S. Army and 24 men steamed into Lady Franklin Bay, about 500 miles from the North Pole, where they established a scientific research station. The group included a young astronomer, a dashing officer who wanted to set a new "farthest north" record, and a few questionable characters — such as Private Charles Henry, who, unbeknownst to most of his comrades, had murdered a man in a frontier dispute.

In 1882 and 1883, brutal summer ice kept the group isolated, out of reach of relief efforts. So, in August 1883, Greely and his men left their well-stocked fort and set off southward. The following June, a rescue ship found just seven survivors of the expedition on wind-swept Cape Sabine. The others had fallen to cold and starvation.

The media, which had helped promote the rescue effort, now began spreading rumors of cannibalism. Intrepid reporters even made a deal with the family of a casualty to have his army-sealed coffin opened so they could see the evidence.

Waterman opens her narrative with this ghoulish postscript, then rewinds to the arrival of the expedition at Lady Franklin Bay. To enter the minds of her characters, she uses an omniscient narrator and excerpts from their journals and letters. (These are her own compositions, the author tells us in a note, inspired by primary sources.) The novel's de facto protagonist is Sergeant David Brainard, a dairy farmer-turned-soldier and a modest, low-key natural leader. He serves as the voice of reason whenever the men threaten Greely's authority, led by the narcissistic Dr. Octave Pavy.

The novel's early chapters can be hard going; they're thick with exposition, sometimes less than gracefully delivered. But once the expedition is stranded on Cape Sabine, the narrative abruptly takes off, becoming claustrophobic and gripping.

The conditions in which Greely's men survived the winter of 1883 bordered on surreal. Waterman describes daily life in their makeshift shelter with Dante-esque precision and gusto:

Outside, the black rocks high above loomed, but gave little protection. Inside, the boat-roof and walls were heavily covered with hoarfrost, moisture frozen from their own respiration. When the men brushed against this, they rained down on themselves their own breath. ... The wind kept them from sleep. They were denned up like foxes.

Such attention to detail makes for a highly immersive read. By the time rescue arrives, readers may feel as if they, too, have been rationing out bits of seal blubber and fighting their way into frozen-stiff buffalo sleeping bags.

Waterman finds beauty in the horrific conditions, too, as when the moon shines and "The icebergs were lit as if by a thousand candles, their shaft-like shapes reflecting, absorbing, shifting, expanding, even dancing like prisms in the terrible cold."

Equally compelling is the human drama of watching these young, battle-hardened men reveal their true natures when pushed to their breaking points. Lieutenant James Lockwood, the dashing explorer, retreats into elaborate food-centric fantasies, reciting the menus of his favorite restaurants. Brainard and two native Greenlanders doggedly keep the group alive by hunting and fishing. Private Henry has plenty of practice in food thievery and hoarding, but events may defeat even his cunning. And Greely, a stickler for decorum, will eventually find himself giving an unthinkable order in a chillingly matter-of-fact tone.

If the book's setup is a bit clunky, these payoffs more than compensate. Readers seeking a distraction from our long winter nights — which are, of course, brief and balmy by arctic standards — shouldn't miss Starvation Shore.