Quick Lit: Review of 'The Möbius Strip Club of Grief' by Bianca Stone 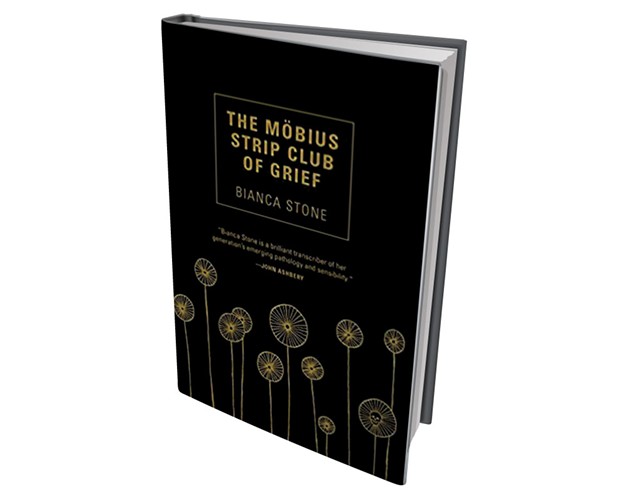 A Möbius strip is a surface with only one side and one boundary (think of a ribbon connected in a circle with one twist). It doesn't have a front or a back — in that sense, it's a confounding object.

That's also true of Bianca Stone's new book of poetry, The Möbius Strip Club of Grief. Or, at least, it's true of the "strip club" the book is named after, a poetic and psychological construct that Stone uses to explore concepts of womanhood, family and grief. There, up is down, dead is alive and skeletons give lap dances. Time is continuous, looping — and reality is constantly shifting.

Stone is the author of two previous poetry collections and several chapbooks. This two-part volume, published by Tin House Books, offers a series of free-verse poems, some as short as six lines, and one lengthy piece spanning 18 pages. It comes with serious accolades from esteemed poets, some living and some dead (fittingly). The late John Ashbery calls Stone "a brilliant transcriber of her generation's emerging pathology and sensibility." Sharon Olds says, "In her poems, we're in the presence of a naked human voice, not concealing itself — or overreaching to expose itself — which dives as deep as voices go."

Yes, 34-year-old Stone is of her own generation, and her poems have the voice and cultural references to prove it. And, yes, her voice is naked and human — at times grossly brutal and gory. But it is also tender and often maternal, which makes sense because, at its core, the MSCOG (as Stone refers to her titular construct in the poems) is about women.

It's about women and how they function as a family. It's about women and how they relate to the world, how they relate to men and power (and vice versa, squared). Stone explores what it is to be female now, what it is to lose and to grieve. She constructs a psychological space that she ultimately rejects, after tapping the strip club, its stories and its characters for all they are worth, even in death. After all, the MSCOG is for the dead and wounded women of this world.

The book is prefaced by a short poem that sets the scene. Drawing on Norse mythology, Stone recalls the god Odin's fateful wish to know "everything there is to know." Once his wish is granted, "The weight / of wisdom made his face sour. / Seeing everything blown to shit. / The gods with it. After that, he never ate again / and lived on a strict diet of alcoholic beverages / at the Möbius Strip Club of Grief."

Immediately, Stone establishes a relationship between wisdom and grief, between seeing the world for what it is and obtaining a keycard to the MSCOG.

That connection is cemented in the fourth poem, titled "A Brief Topography of the MSCOG." "Over the door there's the iconic ice-pick in a human heart," Stone writes. "You have to show a scar to the bouncer to get in: the old suture / holes, a common kneecap, the shy smile of a cesarean, / spatter of long-gone acne. Any scar will do."

"And," the poet continues, "you / have to tell a story about your mother. Something she / suffered through. But once you're in, you're in forever."

Stone lives up to that demand by sharing stories of her mother, sister and grandmother. That last is the late, great poet Ruth Stone, who passed away in 2011. Much of the book grieves Ruth and remembers her, exploring the poet's relationship with her in life but mostly in death. (Bianca currently lives with her husband and young daughter in the Goshen house where Ruth raised her children and wrote poetry for most of her adult life.) Ruth often appears as a ghost, a shade or something that has just crawled uncannily from a grave.

In "Making Applesauce With My Dead Grandmother," for instance, Stone writes, "I dig her up and plop her down in a wicker chair. / She's going to make applesauce and I'm going to get drunk."

Here we have the sense that the mystical otherworld (or almost underworld?) Stone is constructing is untroubled by crystal balls, spackled stars or fringe. It is a very real unreality, a place of wicker chairs, regulated games of solitaire, and Grandma in a flannel and Birkenstocks. We also see the themes of inebriation, gluttony and overconsumption that so often seem to be associated with grief and pain in the MSCOG.

Stone doesn't always present those coping strategies uncritically. Much like a Möbius strip, which flips and cannot be pinned down or measured, the poems in this book don't exist on any one plane, or in any one state of pain. Stone even closes the doors to the MSCOG at the end of the book, in a poem called "The Dark Ages, Revisited."

"But what about the Möbius Strip Club of Grief?" she asks. "I find there's no solace in it for me today." At book's end, the poet begins questioning her reasons for writing this volume. Having affirmed her belief that women have minds that are different from those of men, she quotes a dissenting opinion from feminist philosopher Geneviève Fraisse: "But, as a whole, reader, it is faulty / to speak of 'sex and sexuality when it is the mind at issue.'" Yet Stone is speaking of sex and sexuality, and of the mind, when the poem asks, "So why am I writing this psychosexual opus to the mind of my women?"

We don't need an answer. The opus is enough. The question is enough.

As that poem closes, Stone imagines setting aside the MSCOG, or perhaps just her own grief. (It's hard to tell where one ends and the other begins.) "Sweeping. Wiping everything down. / Locking / the front door. Turning off the lights." And, in the end, the poet leaves the stage she created as many a host has done before her, with a simple "Thank you. / And Goodnight."

Speaking of Bianca Stone, The Möbius Strip Club Of Grief