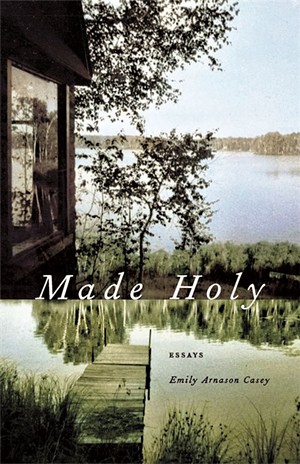 By the end of Made Holy, an essay collection by Emily Arnason Casey, readers may feel as if they've visited the lakeside cabin where she spent her childhood summers and where "[s]ilence opened up around me like a secret kingdom..." ("The Cabin"). We may imagine we've been in her grandmother's house in Minnesota, where a mirror in the stairwell "seemed like a vital organ in the house or a necessary appendage" ("Ancestry of Illness"). We may even feel as if we sat with the author in the Vermont rental where she watched trees outside the window and experienced "[a] luminosity akin to water" as she first celebrated a pregnancy and then mourned its loss ("Alchemy of Shadow").

Casey teaches at the Community College of Vermont in Winooski. Many of the 20 essays in this debut collection appeared in journals such as The Rumpus, upstreet and American Literary Review; one was honored as "notable" in The Best American Essays 2014.

The essays in Made Holy raise many subjects — childhood, motherhood, addiction, recovery, misogyny, feminism, grief, transcendence. Because all are intensely personal and intimate, however, and because many cover the same autobiographical ground, they give the impression of a continuum, merging in a reader's memory.

We travel along the surface of time and then suddenly the layers give way and we are in another body, another year, another place. We've dipped down into a different layer on the geological map of life, and for a split second we really are the other self again.

One of the things Casey recalls in these essays is her long battle with "the family disease of alcoholism" ("Ancestry of Illness"). Drinking, too, is an out-of-body experience: "I began to lose myself," she writes in "The Blue Room."

In the same essay, Casey describes in wrenching, visceral terms "How it felt to get sober: A body is forced through the surface, a body that has lived submerged in water for years. It doesn't know how to breathe in air. The sun in its open eyes burns."

Casey has been sober for years, but she still feels "that familiar pattern of want creep into my days," she writes in "That Kind of Blue," "like a pulse flickering alive, its all-consuming desire for more." A beloved cousin, also an alcoholic, continues to drink. In several essays, Casey expresses love and fear and anger as she contemplates this path not taken. Communications from her cousin are erratic, leaving her "tired of living clenched with fear — not knowing," she writes in "Prayer for the Scavenger World."

Those words exemplify the candor that permeates the whole collection and compensates, to a degree, for its repetitious, overlapping, merging quality. This reader sometimes grew impatient with Casey's frequent return to the same constellation of memories, wishing for an essay that would transport us somewhere we hadn't been yet. None appeared.

Despite this element of sameness, Casey's insights are raw and powerful. Her prose is most compelling when she gives free rein to poetic, elliptical tendencies, building image on image in seemingly random chains that return unerringly to her central preoccupations. "Laughing Water" describes a family game of free association and then mimics one; each section builds on a single word or idea from the last. What emerges is a powerful portrait of the author's brother and a family's cycles of love and loss.

When Casey engages in overt philosophizing, her writing is less fleet. "I want to believe in her final moment. I want to believe there is some thought, attuned to grace, that arose," she writes in "Prayer for the Woman Murdered in My Neighborhood," about the community response to the 2010 murder of Kathleen Smith in Burlington's Old North End. But Casey also movingly evokes the neighborhood's grief and fear and the memorial shrine that arose outside Smith's home.

One of Casey's recurring themes is the leap of faith involved in loving objects and people whose loss is unavoidable. Or is it? Using her talent to speak her memories back into being, she gives them an afterlife in her readers' minds, too.

The original print version of this article was headlined "Quick Lit: Speak, Memory"