Quick Lit: Hope A.C. Bentley Turns Out YA Novels and a Publishing Company 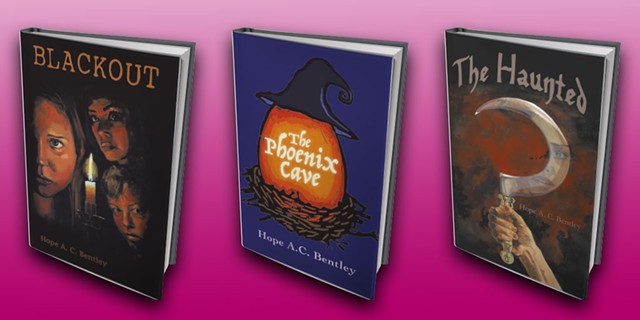 In late 2018, East Burke writer Hope A.C. Bentley started her own small publishing company: Golden Light Factory. She's put out five books — four by her, one by Valerie Chase — under the tagline "Provocative Books for Clever Readers." Ranging from picture books to novels for teens and tweens, they sport artfully hand-illustrated covers (by Kate Renner and Elly Barksdale) that recall the well-loved library copies of eras past.

Provocative or not, Bentley's novels certainly have tantalizing premises. In the YA tale The Haunted, 15-year-old Lydia goes to the Claybourne Academy of Excellence, a boarding school "for geniuses" on a remote Maine island, to find out why its graduates keep dying by suicide. The answer, which involves hypnotism and witchcraft, won't come as a surprise to readers of Lois Duncan's classic boarding-school gothic Down a Dark Hall. But Bentley puts her own creepy spin on an already-disturbing concept, adding a contemporary wrinkle: Claybourne forbids high tech, making it impossible for students to splash their horrifying discoveries all over Instagram.

The terror of losing touch also figures largely in Bentley's YA novel Blackout, in which a computer virus fries the electrical grid — and cellphones — across the U.S. The story alternates among the viewpoints of three young protagonists, two on road trips. While Margot bones up on survival skills in tiny Canton Hollow, Vt., her older sister travels home from boarding school on the Appalachian Trail, and their cousin makes his way from Wyoming by boat and motorcycle.

The plot maintains a good balance of action and emotional fallout, and the portrayal of Vermonters banding together in a catastrophic situation might remind readers of local responses to Tropical Storm Irene. Bentley can occasionally get a bit preachy, as in a scene where teens find their usual social divisions dissolving in the absence of digital distractions: "It was weird how without our phones we were all a little braver." Then again, she's not necessarily wrong. And, while it's not Cormac McCarthy's The Road, Blackout doesn't paint too rosy a picture of Americans forced to hoard canned goods and smoke meat for survival.

While Bentley's prose is always strong, she has a special flair for describing people. In The Haunted, a teacher's "hair unfurled down her back like a shiny black tongue"; in Blackout, "Mrs. Murphy was as thin and bent as a shepherd's crook and scurried everywhere she went like she was expecting to get stepped on by an enormous boot."

In Bentley's middle-grade novel The Phoenix Cave, a girl lives with her mom — who's a witch — in a treehouse that normal people can't see. The narrator's hair is "every color that an autumn leaf can be, but I don't recommend judging a person by her hair," she notes tartly.

While that fanciful tale should appeal to Harry Potter-obsessed kids, Golden Light also offers a nonfiction picture book addressing more practical matters: Where Else Do Babies Come From? A Family Guide to Assisted Reproduction, also by Bentley. Between visual aids for parents called on to explain difficult topics and thrilling tales for teens, this author is carving out a neat little niche in the NEK.

The original print version of this article was headlined "Quick Lit: Shedding Light"