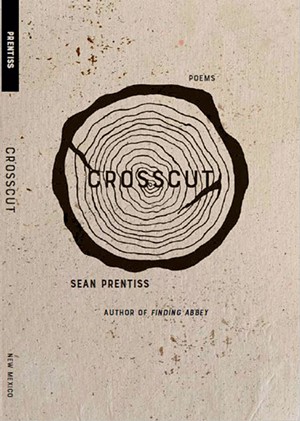 We're so accustomed to thinking of poetry as an internal, meditative mode of writing that it may surprise us to read poetry about physical labor. But that's precisely what Sean Prentiss, a faculty member at Norwich University and Vermont College of Fine Arts, offers us in his new "memoir-in-poems," Crosscut.

The book takes its name from a two-person crosscut saw, and here's how Prentiss describes using one in "Pull":

This July day we pull the teeth

handles to chest, then loosen.

By the end of the poem, readers may feel a phantom burn in their delts as "An hour from first nibble, the rakers shed / final blond curls from heartwood, / phloem, underbark, & bark."

Crosscut chronicles five months that Prentiss spent maintaining trails with a group of at-risk teens as a crew leader for the Northwest Youth Corps. When he signed up for the job, he tells us in "Retreat," he was 26, "tired of temp work" and urban living, but not particularly prepared for wielding chain saws in the wilderness of the Pacific Northwest. "I have never handled a trail tool. / I have only backpacked once."

That changed quickly. As Prentiss describes getting a crash course in forestry, he gives the reader one, too; if you don't know what a Pulaski, a pick-adz or a bastard file is, by the end of the book, you will (a glossary in the back helps). More importantly, you'll learn what these tools mean to the poet and the kids he leads. They're ways to test limits, to break bad habits, to live close to nature, to grow from an individual into a crew.

Often they feel like extensions of bodies. "[F]or these tools are nothing without / us," Prentiss writes in "Museum of Hand Tools," "& we are even less without them."

Prentiss is also the author of the award-winning biography-memoir hybrid Finding Abbey: The Search for Edward Abbey and His Hidden Desert Grave (2015), and Crosscut is suffused with the passion for rugged nature that he shares with that renowned environmental advocate. "On the tan flank of this mountain the Klickitat / call Loowit, the world is soft hues of dawn's / only breath," Prentiss writes in "Morning Freedom."

As the crew moves from site to site, the poet evokes the "bone-dry ash" of Mount St. Helens ("Gemini"), the "alpha river" of Buckhorn Wilderness ("Alpha"), the "Snow-crowned / peaks, tattered ridges" of Glacier Peak Wilderness ("Remote") and more. Working in this desolation, the crew experiences a "stripping" or "dismembering" of language itself, as Prentiss writes in the prose poem "Stripping." "What use for the word sink? When might we utter closet or phone or bank account?"

There's a touch of preachiness in Prentiss' conclusion that "these industrial words taint our wild new memories." For the most part, though, this poet makes no claims to occupy higher ground. If Crosscut is an elegy for a lost wilderness idyll, it's also a self-aware, often wry account of a turbulent time in the author's life, marked by the painful breakup of a long-distance relationship.

"They dream I'm some / put-together adult," Prentiss writes in "The Backpacks of Our Lives" — referring to his crew, who come to him from addiction and violence. In fact, he's closer to them than they imagine: "I'm just / weeks since drinking / toward blackout..."

Written in tightly compressed yet conversational language, the poems in Crosscut can crackle with humor, too. A series of haiku traces the growth of the poet's beard. A rant-in-verse titled "Why Am I Yelling? I'll Tell You Why" concludes, "I commiserate only / With cedars, and they are miserable conversationalists."

It's easy to romanticize the macho vigor of woodsmen living under the open sky, but Prentiss does something different here. (One of the hardest workers on his crew is a young woman, who shares the crosscut with him in "Pull.") He depicts backbreaking labor not as a domination of the landscape but as a deeper union with it, just as the tool becomes "an exact extension of my trail-weary arms" ("Distance").

At what point does hard labor stop nurturing the body and mind and start harming them? What do people lose when they do their work at keyboards and experience nature primarily as "recreation"? With grace, power and humor, Crosscut makes us ask such questions as it reminds us of the power of sweat to transform our environments — and ourselves.

The original print version of this article was headlined "Sweat Equity"