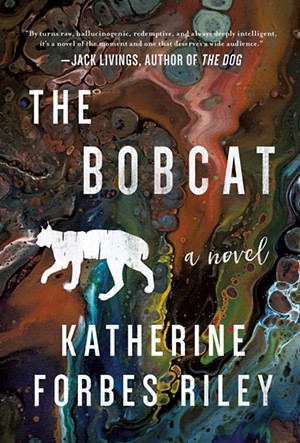 In today's crowded literary marketplace, writers are often exhorted to make sure their novel has a "hook" — an attention-grabbing premise that translates easily to a screenplay logline. So it's oddly refreshing to encounter a hookless book that develops at its own stubborn pace and sucks you in anyway.

The cover copy of The Bobcat, the debut novel from Norwich author Katherine Forbes Riley, describes a tale of reflection, recovery and romance augmented by animal symbolism — nothing that stands out much in the landscape of literary fiction. The blurbs, however, do stand out: Alexander Chee is among the host of well-published authors who've raved about the book. As one falls under the spell of Riley's meticulously crafted sentences, it's not hard to see why.

For most of its brief length, The Bobcat has only one named character: the protagonist, a college student named Laurelie. The book opens with her rising in the morning, looking out the window, doing yoga and thinking about an art project. It's a while before anything resembling a conventional plot develops.

But for Laurelie, who's living in the aftermath of a frat-house rape, every day is already a drama. Each trip to her small-town Vermont campus, each interaction with a man — no matter how well intentioned — fills her with anxieties that Riley describes with a rare intimacy:

She knew what she was experiencing wasn't real, not exactly. Rather it was a kind of hyper-awareness, her brain taking in each minute detail of a scene and then twisting it, interpreting it in some predaceous relation to herself. And yet still even recognizing it did not lessen this perception; on the contrary it only became more acute as time passed, until every form became a caricature of itself, and every movement a threat she experienced as an actual physical blow.

Laurelie processes her trauma by creating art that refracts this daunting world through canonical allusions and comic-book-style panels, evoking "high" and "low" forms simultaneously. In a similar way, The Bobcat is both a literary novel and an unapologetic romance, taking a plot that Nicholas Sparks could probably have cashed in on and twisting it into something darker and more complex.

One day, Laurelie encounters a nameless hiker in the woods in the company of a wounded pregnant bobcat. He's followed the cat 300 miles from Maine, keeping her alive until she can safely deliver. The hiker is strong and silent: a woodsman, a hunter, a cook and — as readers will intuit long before this becomes an issue — a good lover. He is an archetype whose roots stretch back to the beginnings of American fiction: the wild man with healing powers.

And yet he, like Laurelie, is also troubled and in need of healing. When the hiker encounters strangers, his eyes stream, his nostrils flare, his breath comes in pants. Crowds overwhelm him. He is, in short, animalistic in a more literal sense than we tend to expect from characters who embody "animal magnetism." Naturally, he and Laurelie are drawn together. But their mutual attraction is not in itself a cure.

Toward the end, The Bobcat's plot veers in a speculative direction that isn't entirely successful, and Riley sometimes goes too far in depicting the mainstream world as grotesque and hostile ("Everything people did stank of corruption"). But then, that's how Laurelie and the hiker experience it.

There are loads of novels about trauma, but few have so compellingly described "the fear ... of being human, a human among humans" while conveying the power of love and sexuality to find a path through that fear. "The air around him seemed to sparkle and crack," Riley writes of Laurelie's response to the hiker, "and even after looking down she still felt as if she were being struck by electrical shocks, over and over again."

Riley's prose sparkles and cracks with its own kind of power. Like a visit to the den of the titular bobcat, her novel makes us feel like we've witnessed something private, untamed and perhaps a little sacred.

The original print version of this article was headlined "Quick Lit: Into the Wild"