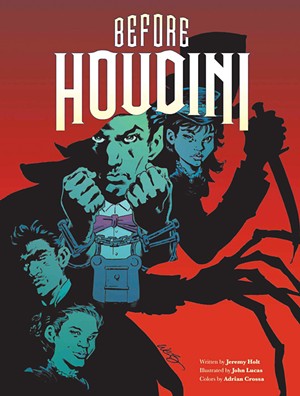 Over the Fourth of July weekend, Season 3 of the Netflix science-fiction horror drama "Stranger Things" broke the record for the online streaming service's largest viewership for an original release in its first days. In just 96 hours, more than 40 million member accounts viewed the program about a ragtag group of midwestern kids fighting dark forces. The idea of young outsiders banding together and using their special skills to save the day is a popular one.

Vergennes author Jeremy Holt employs the misfit hero archetype in his new graphic novel, Before Houdini. Released on July 16, the 96-page book is the second in a two-part series centered on Harry Houdini that blends history with fantasy. The series' first installment, After Houdini, follows Josef, the world-famous magician's fictional son. Josef hones his inherited superpowers and goes in search of his father, who has been apprehended while working as a covert spy for American intelligence.

In this second book, the protagonist is young Harry Houdini, still known as Ehrich Weiss (a version of his real-life birth name, Erik Weisz). Readers follow along as Weiss evolves from a lonely schoolboy into a dedicated student of magic. After earning a reputation as a formidable street performer specializing in escape acts, he's recruited into a group of gifted teen agents. Their task: to use their unique powers to fight a murderous figure — a fictionalized Jack the Ripper — terrorizing London.

"He has harnessed the energy," explains Joseph Merrick, aka the Elephant Man, one of several historical figures involved in the tale, "but it has emboldened his sinister nature to commit unspeakable crimes against humanity."

Unlike After Houdini, which focuses primarily on one young man, its prequel features an exciting and diverse ensemble. The talented teens include Raj Patel, who conducts light; Elenora Darana, who has a super sense of smell; and the clairvoyant Atsuko Nakamura. With their varied skills, voices and genders, this cast makes for a more colorful and compelling read. One can only imagine that each of them has their own riveting backstory. The idea of spin-offs is intriguing.

Though it contains many references to After Houdini (in a test of mental fortitude, for example, young Ehrich must break free from the same handcuffs that later bind his adult son), Before Houdini can easily be enjoyed on its own. The stories are connected but not dependent on each other for clarity.

As a bonus, the last few pages of each book offer a glimpse into the visual artwork in progress. Both volumes are illustrated by John Lucas, with colors by Adrian Crossa. The colors are dark and moody, and the drawing conveys the tension and high-voltage physical motion of the narrative. I am personally more drawn to the '90s grunge aesthetic of Holt's 2018 graphic novel Skip to the End than to that of 1888 London, so I found the Houdini books' graphics to be less pleasing, though no less artful.

At the start of the story, after young Weiss emigrates from Hungary to Wisconsin and then to New York City, he feels homesick and out of place. By retreating into his mind, he finds his source of power: "My brain is the key that sets me free," he says.

Holt likewise moved around the globe as a child, living in Singapore, Norway, England and Texas for his father's job. He may have channeled those feelings into his protagonist. With parallels to "Stranger Things," The Umbrella Academy and even the perennially popular movie The Goonies, Holt has tapped into themes of isolation, empowerment and coming of age. Outsiders, it seems, are in.

The original print version of this article was headlined "Quick Lit: Squad Goals"