A global pandemic sure makes for a strange time to release a new book. On the one hand, appetites for reading are high, as those in isolation look to books — along with Netflix and booze — to stave off cabin fever. On the other hand, authors are deprived of the traditional avenues for promoting their work: Restrictions on travel and public gatherings make in-person book tours all but impossible. That's especially a problem for someone like Rik Palieri.

Palieri, soon to be 65, is a Vermont-based, banjo-slinging folk singer. While he calls Hinesburg home, until recently Palieri didn't hang his signature Stetson hat there all that often. As the title of his 2004 autobiography, The Road Is My Mistress: Tales of a Roustabout Songster, suggests, his true home is the great American highway — and, on occasion, the byways of Europe and South America.

Palieri was a friend and protégé of the late folk greats Pete Seeger and Utah Phillips, the latter a genuine hobo who spent considerable time in Vermont. Like them, Palieri fits the classic American mold of the wandering troubadour. He's traveled from sea to shining sea and around the globe preaching the musical gospels of Pete and Woody (that'd be Guthrie) on stages large and small. And he's got stories to tell.

Some of those tales made up Palieri's first autobiography, significant portions of which reappear in his recently released Banjo Man: Adventures of an American Folk Singer, along with additional stories. At a hefty 530 pages, the new book is rich in details of Palieri's life and travels. It's also loaded with anecdotes and recollections that folk music history buffs and preservationists should find particularly fascinating. Palieri offers uniquely personal snapshots of Seeger, Phillips and many others who helped make him the person he is.

"I think you can see that you can be shaped by your mentors," Palieri said by phone about Banjo Man. "That's what this book is really about."

Palieri grew up in New Jersey and had a troubled and violent childhood. Music guided him past his rough early years, as did his relationship with Seeger, who died in 2014. Seeger's gentle brand of social and environmental activism and community building remains a philosophical beacon for Palieri. 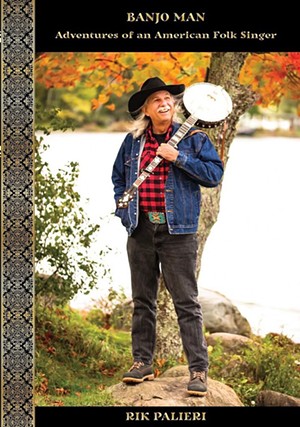 "I had this dream of being a musician," he explained. "Pete Seeger came into my life at a young age, and he stayed with me until he was gone."

In more recent years, Palieri didn't see Seeger "all the time," he said, though the two communicated regularly by mail throughout their long friendship. "But there was always this presence of Pete guiding me through life."

The same was true of Phillips, Palieri said.

"I thought it was important for me to share what I learned from these mentors for those people who will never have a chance to meet them," he added.

While Palieri's autobiography is something of a tell-all, as music books go it's relatively free of scandalous revelations. The closest it gets is the account of a brief, rather uncomfortable period in the 1970s, when Palieri and a girlfriend lived upstairs from some randy swingers.

"Banjo players, we weren't the most popular people," he said. "It wasn't sex, drugs, and rock and roll. You attracted old men and dogs, being a banjo player."

"Stories have a life of their own and a power of their own that you can't argue with," Palieri said. "The important part is that stories teach us something."

His colorful tales often do just that, many including still-resonant lessons he learned from his fellow folkies.

"These people were the real deal," Palieri said of Seeger and Phillips. "They were very special in the way they lived a principled life, and they worked hard to live that way. We don't have as many of those role models now.

"Pete was the first person who showed me that you can change the world if we worked together, if we sang together," he continued. "And I think that's something we could use a little bit of right now."