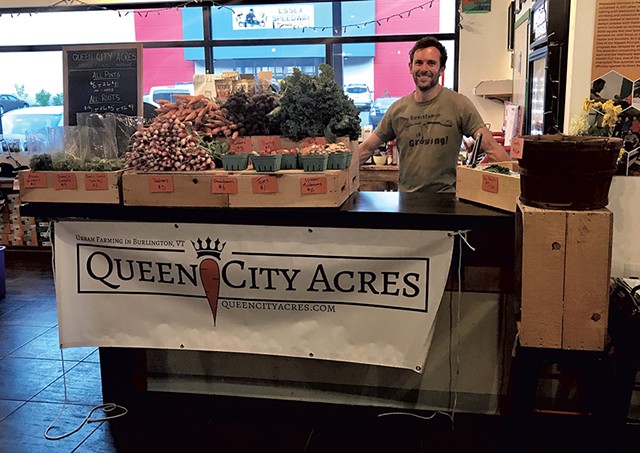 Scrutinizing the house in front of me, I thought I must have the wrong address. Deep gray with bright orange and white accents and a kiddie pool in the pristine front yard, the place didn't look like it could be the urban farm I was looking for in Burlington's New North End. But then farmer Ethan Thompson, lean and bearded, rounded the corner. He was wearing a sage-colored shirt depicting a fist holding a spade and the words: "Resistance is growing."

And so is he. Thompson, 37, has a master's degree from the University of Vermont in community development and applied economics as well as a certificate in permaculture design from Yestermorrow Design/Build School in Waitsfield. For years, he has been cultivating produce at two locations — this New North End backyard that belongs to some friends and his own home in the Old North End. He calls his enterprise Queen City Acres.

At first, the food was intended to feed his friends' family and his own. But last year, Thompson realized that it wasn't a viable hobby. "I was putting in a ton of time to manage the garden ... It was very weedy, and I didn't have the time to stay on top of it," he said. "It seemed like a dead end."

Thompson was on the verge of quitting when he found a YouTube series on profitable urban farming. "I was sitting at the computer, and what popped up is this fellow who's making a living growing food in other people's backyards," he explained. "Seeing how other people had done it, I was finally able to envision how I might do it."

And so he founded Queen City Acres. Thompson expanded the main plot in the New North End to 4,000 square feet. Then, in the same neighborhood, a woman who had tended her garden for 30 years and wanted help offered him another, smaller plot.

Thompson grows several crops in his own yard, including pea and sunflower shoots and pink and gray oyster mushrooms. "People love [them]," he said. "I had no idea to what extent sales would be driven by mushrooms."

Thinking about how to find customers for his new business, Thompson realized that he'd need to get creative. "In the first year, I didn't feel like I could commit to even the smallest farmers market," he said. He wasn't sure he could reliably produce enough food, and he worried that his limited selection couldn't compete with bigger operations.

Therefore, Thompson opted for a pop-up market model. Every Thursday, he totes his food to MetroRock climbing center in Essex Junction and sells it in the lobby. On Friday, he does the same at Scout & Co. on North Avenue in Burlington, just around the corner from his home. 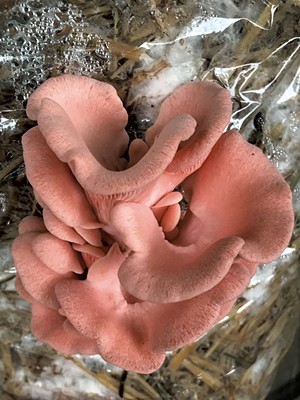 Stopping by the local coffee shop for a few hours a week, he noted, was a better business proposition than delivering vegetables to people's homes or having them randomly swing by his place for a head of lettuce or pint of cherry tomatoes.

In February, Thompson began popping up at MetroRock with shoots to sell and a sign-up sheet for his farm stand community supported agriculture, or CSA, shares. Unlike shares he's received, he doesn't decide what to package up for people each week. Customers pay in the spring and receive that amount, plus a bonus percentage, as credit. Then they choose whatever they want from his selection, whenever they want it. "It's a totally flexible model," the farmer said.

Thompson wanted to avoid the problems he'd had participating in other CSAs. "I'd done CSAs for a number of years but stopped," he said. "I was getting more stuff than I could use and got stuff I wasn't interested in using."

In his research on this agricultural model nationwide, Thompson found that the average rate of retention for customers is only 50 percent. He guessed that other participants had issues similar to his. By giving his customers free choice, he hopes to keep them.

At first, Thompson said, his pop-ups were a little slow, especially the one at Scout & Co. "It rained the first eight Fridays I was out there, and there weren't many people walking around," he lamented. But his fortune changed when he began weekly posts on Front Porch Forum about what he was going to have on offer. "That seemed to make a huge difference," Thompson said.

On a recent Thursday at the MetroRock pickup, a steady trickle of people stopped by to check out the cartons of late-season strawberries, bags of mesclun mix and mustard greens, and piles of radishes and carrots. Thompson said that greens — which grow quickly and can be cut several times — are one of the mainstays of profitable urban farms, as are baby roots. Bulky items or veggies that have a longer growing season, such as potatoes, cabbages and corn, are best produced in more rural environments.

Christine Dong, who works at MetroRock's front desk, remarked that having Thompson pop up with veggies at the gym is a boon for climbers. "It's really beneficial — everyone here likes to eat local," she said. "I love having the seasonal produce ... the mushrooms, the greens."

Based on this year's success, Thompson hopes to expand his operation in 2018 by adding two more plots. And, he said, "I've got feelers out for some sort of indoor space for doing microgreens in the off-season, and for storage."

The friends who own the main plot have also allowed Thompson to build a simple wash station for cleaning and packing veggies and a walk-in cooler for storage, both critical to the operation. Without that infrastructure, he said, he wouldn't want to be a professional farmer.

The farmed plots, wash station and cooler have taken shape without changing the character of the neighborhoods in which he's farming. From the street, the houses appear typical. Only when you enter the backyards do you notice row after row of tiny greens poking through the soil, a pile of kale drying under fans below the wraparound porch and a helper packing up carrots for the market.

The biggest difference, Thompson surmised, is that folks in the surrounding houses — most of whom are his customers — as well as his climber friends at MetroRock, now know exactly where their food is coming from.