Editor's note: This story was assigned and written before the current COVID-19 pandemic very quickly turned life upside down worldwide. As of press time, the sucrerie will be closed until March 28 or longer, per a provincial government order. We decided to publish the story to inform readers about the sucrerie, a place we might be able to enjoy when the coronavirus finally subsides. Meantime, please be safe and take advised precautions.

A brochure for Sucrerie de la Montagne bills it as "Where the past becomes present." Serving traditional Québec fare year-round in Rigaud (pronounced Ree-go), a small town west of Montréal in the Laurentian Mountains, the sucrerie has been profiled by the New York Times, featured on Anthony Bourdain's "No Reservations" and recognized by the Canadian government for its contributions to tourism.

Although I am wary of contrived nostalgia, I love pork and festivities, which Sucrerie de la Montagne promised to have in abundance. After happily feasting last year at Érablière Hilltop, a sugar shack in the Eastern Townships, I was eager to visit another this sugaring season.

The warm atmosphere of Sucrerie de la Montagne is at least as important as the food. A horse-drawn sleigh ferried visitors from the parking lot to the main building. A campfire burning not far from the wood-fired bakery welcomed us with stumps to sit on. A 20-foot-tall pile of snow enticed kids and adults alike to play King of the Mountain or to simply regard the vista of 100-year-old maples.

Our group of two Québécoises and two Americans wandered through the large wood-paneled banquet hall before our meal. Scattered throughout were wood cookstoves from the turn of the 20th century, at least one of which was fired up and hot. They were huge, exquisite beasts: black cast iron accented with ornate chrome, with more than enough burners for a Thanksgiving dinner.

Pierre Faucher, who founded the sucrerie in 1978 with his then-wife, said he collected the stoves from area residents who were "throwing them away" in favor of modern appliances. He restored and re-chromed the stoves and rebuilt the dining hall using wood from a 200-year-old barn.

A Québécois who grew up in the West Island of Montréal but often visited his father's family in the woodsy Beauce region of the province, Faucher said he wants to share the lifestyle and hospitality of the Québec woods with the world.

"It's really important for me to keep all of those traditions alive, so our local people can see how we existed. It brings you back 100 years. It's like a museum," he said.

At 73, Faucher remains a strong presence at Sucrerie de la Montagne. In the morning, he helps start the fires that bake the bread and boil the sap. When we visited, he stood near the entrance of the banquet hall and chatted up visitors; his son Stefan was working in the gift shop. The main building holds at least seven large depictions of Pierre Faucher, including a photo of him holding a bust of his own head, displayed beside the bust itself. 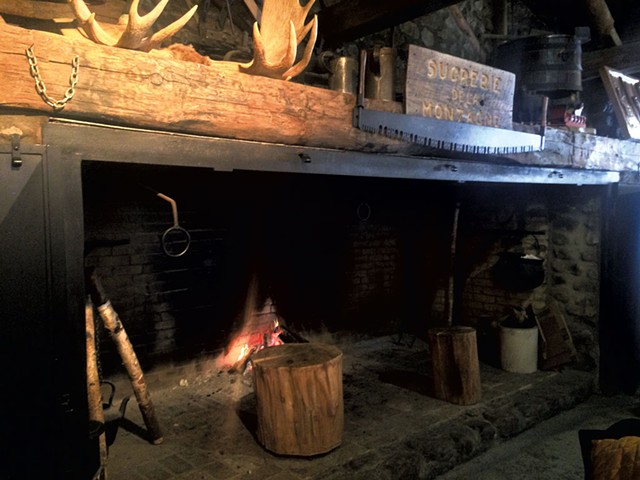 Faucher said Sucrerie de la Montagne has 80,000 visitors per year, and about half of them come during the sugaring season. His differs from most sugar shacks in that it serves food in all four seasons; it also hosts private and corporate events and buses full of tourists and students.

High-volume restaurants typically have a churn-and-burn atmosphere, often exacerbated by fast-paced music designed to get customers to eat, drink and get the heck out so someone else can do the same. Perhaps we just had good timing, but we felt no pressure at the sucrerie to do anything but partake in the food, live music and revelry to our heart's content.

If you're self-conscious about traveling where you don't speak the local language, rest assured that you'll be fine. Broadly speaking, French Canadians do not expect folks from the U.S. to speak French (though squeaking out bonjour and merci shows good manners).

Aside from choosing a drink — coffee, tea or booze — you don't even need to order at the cabane. The extensive set menu, based on Faucher's mother's recipes, is served family style in three courses to each group. Seatings without fixed end times are available daily on the half hour for most of the morning, afternoon and evening; on busy weekends, reservations are a good idea.

In the banquet hall, we found a boisterous mix of hundreds of people of various ages and apparent backgrounds. Warm light reached the broad wooden beams of the cathedral ceiling. Dozens of oil lamps flickered on the 30 long wooden tables, which aproned servers soon covered with dish after dish.

The first of our 15 dishes was a brothy split pea soup with crusty bread. On the table was a jar of housemade "fruits ketchup," a chutney-like side of tomatoes and apples that complemented another dish, the maple-glazed smoked ham. We enjoyed the "ketchup" and the other relishes — sweet and sour pickles, and pickled beets — so much that we asked for more, polishing off nearly two pints of accoutrements between the four of us.

The hearty food was typical of a Québécois sugar shack feast or winter holiday gathering: meatballs in pork gravy, whipped potatoes, sausages, baked beans with a side of salted back bacon, and a fluffy baked omelette. Most memorable was the tourtière, a deeply flavorful meat pie with a hint of offal. My friends asked for more meatballs, which were granted for no additional charge.

"They're really putting all the sauce in it," said Véronique, who grew up in Québec City, speaking of both the food and the atmosphere, which included live music. A few traditional French Canadian folk songs and five pork dishes later, she had tears of raw joy streaming down her face. For her part, Vanessa, a Montréaler friend who was recovering from a concussion, had put on blue noise-canceling headphones to tune out the ecstatic fiddling while munching on meatballs.

Until I noticed Véronique's wet face, I'd been lost in reflections: specifically, wondering whether the sucrerie was a solid example of a joyful way to experience other people's cultural traditions without exploiting or exoticizing them. Ray, a steady Yankee, looked a bit bewildered by the state of our group. We asked for more meat pie.

When our eating slowed down, and the waitstaff politely offered to clear our plates, we asked them to leave the food on the table while we took a break to dance. "C'est correct" ("That's fine"), our waiter replied.

A guitarist and a fiddler played lively folk renditions while the audience clapped along, and then passed out wooden spoon instruments for children to play. "Only 14 minutes left!" the guitarist called out to any potentially overwhelmed guests — or perhaps to the staff, who must hear the revelry on repeat. We surrendered to the intensity and swung ourselves around the dance floor in earnest silliness.

Sugar shack festivities are a celebration of abundance, a time stamp on the shift from winter to spring. tweet this

Feeling released, we asked for another pot of coffee, which was delivered quickly in an antique silver pot. Dessert was sand dollar-size pancakes with light amber syrup and a creamy maple tart with a flaky, slightly salty crust. My only complaint about an otherwise delightful experience: a busser who carried four dirty mugs with his fingers inside them, a throwback that has no place in 2020. Faucher said his staff is "extra careful about washing their hands."

Sugar shack festivities are a celebration of abundance, a time stamp on the shift from winter to spring. Meal finished, we tromped around the snowy trails on the property, which also has a groomed track for cross-country skiing. Snowboarders and alpine skiers can work off all that pork at the nearby lifts of Mont Rigaud.

If the past became present at the sucrerie, it seemed near at hand elsewhere in Rigaud, too. When she saw a brightly lit video and candy store downtown, Véronique insisted on going in. If we had been able to stay longer, I'd have rented the store's copy of Tom at the Farm, by Québécois filmmaker Xavier Dolan.

We ended our day trip at Resto-Bar La Vieille, a no-frills bar with damn cheap beer and ugly plastic tables. An overweight husky lounged on his side beside the bar. The friendly bartender told us that the canine had been a bomb-sniffing dog in Afghanistan, where his original American owner, a veteran, had died.

A dog that's lived in three countries and survived a war that's still going on, now getting fat and happy in the Laurentians? This, after all, was the present.