Quantifying the Quad: Did Burlington's Festival Pay Off? 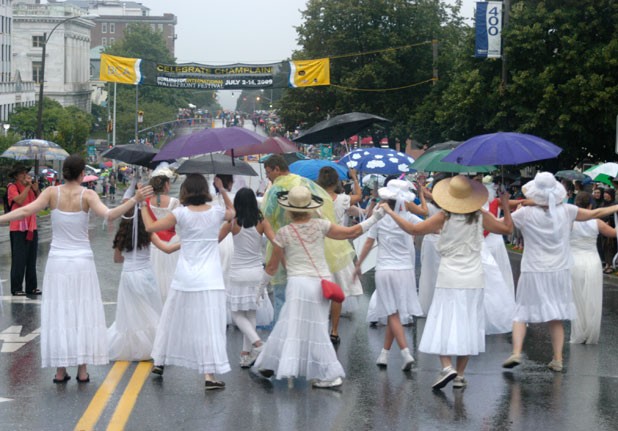 The Vermont Lake Champlain Quadricentennial celebration was 400 years in the making, six years in the planning and, in Burlington alone, cost $1.7 million, featured 102 events, involved more than 1000 artists, musicians, dancers, technicians and volunteers, and was seen by tens of thousands of spectators. Still, when the final chapter is written on Burlington’s Summer of Samuel, it’s almost inevitable that people will focus on just one number: the bottom line.

If you’re among those still waiting on that figure, don’t hold your breath. The city’s official bean counters say it won’t be until September — at the earliest — that all the expenses are tallied and the Burlington City Council receives a final report. Ditto for the statewide meals and lodgings receipts, which are also expected to be filed next month.

Nevertheless, Doreen Kraft at Burlington City Arts, who oversaw the two-week international extravaganza on the shores of Lake Champlain, suggests the Quad celebration did pretty well, despite gloomy weather and a gloomier economy.

A more quantitative assessment comes from Burlington’s hospitality industry. Many reported better-than-expected numbers for the first two weeks of July. In fact, many local businesspeople, including some early skeptics of the fete’s cost and scope, now say that when the Quad’s economic impact is finally gauged, the news will be good. Simply put, despite long odds, Burlington threw itself a beautiful and bountiful bash.

Of course, the bills are still coming due. Judging the Quad celebration strictly on a cash-in-cash-out basis, Kraft acknowledges that the event is currently $292,000 in the red. That figure includes a $125,000 shortfall in expected ticket sales.

Event planners had hoped that ticket sales from the major headliner acts, such as Tony Bennett, Steve Earle and Aimee Mann, would defray the cost of the smaller, free events that were held throughout the city.

Unfortunately, that didn’t happen. Lousy weather combined with an abundance of other big-ticket concerts last month to dampen revenues considerably. This was most evident when tickets went on sale for the Bob Dylan, Willie Nelson and John Mellencamp combo show at the Champlain Valley Expo, which was unrelated to the Quad celebration.

“That just shut down our operations for weeks. Our ticket sales trickled while those were selling,” Kraft recalls. “We’d look at the Flynn box-office sales every day and say, ‘Oh, my God!’”

That said, most of the major acts, including Tony Bennett and Ween, did very well financially, as did many of the smaller ticketed performances. For example, Abby Paige’s one-woman show, When We Were French, and Gary Farmer’s Only Drunks and Children Tell the Truth, sold out every performance.

At least one outdoor show was a disappointment. Aimee Mann and Steve Earle had to be moved into the acoustically challenged Memorial Auditorium, and their performances, according to Kraft, were a bit “lackluster.”

Another financial letdown from the organizers’ point of view: Sales of event-wide passes fell short of projections. Although promoters had hoped to sell at least 100 of those passes — at $1000 a pop — only 35 were sold. A few Vermont high rollers kicked in as much as $10,000 for theirs, but even their generosity couldn’t make up the shortfall.

“The recession was brutal. We saw everything coming in at about 50 percent,” Kraft admits. “But, you knew that when people gave you that much, that was the best they could do. They really reached.”

A few other factors are worth considering. First, the City of Burlington had to take up the fundraising efforts for the Quad celebration after the state’s official $10 million campaign “fell pretty flat,” according to Vermont Department of Tourism and Marketing Commissioner Bruce Hyde. That gave the city one year to pick up the ball and run with it.

Vermont kicked in about $150,000 directly to the city and provided another $50,000 worth of marketing and ad services from its year-long contracts with Spike Advertising and PDI Creative in Burlington, according to Hyde, who chaired the Vermont Lake Champlain Quadricentennial Commission.

Another $70,000 in last-minute federal funding came to Burlington from Vermont’s congressional delegation, Hyde notes. Québec’s provincial government covered $100,000 in costs to bring Canadian artists and performers down to Burlington.

Two years ago, when the Vermont Lake Champlain Quadricentennial Commission issued its strategic plan for the 2009 celebration, the National Park Service estimated the 400th anniversary would generate $133 million in additional revenue for the Champlain Valley over the next six years.

How much did Chittenden County — and Vermont as a whole — reap this year? Although Vermont’s total rooms and meals receipts were down 3.4 percent from fiscal 2008, Hyde says, “That’s not bad, when you’re looking at some of our neighbors being down by double digits.”

Hyde says it’ll be difficult to tease out how many of the 2009 tourism dollars this summer are attributable to the Quad celebration versus ordinary tourism traffic. Clearly, the state was banking on a strong Québecois showing at Burlington’s Quad party; in June, the state threw Burlington $50,000 to market the event in Montréal alone.

It’s difficult to say whether that investment paid off. According to data from U.S. Customs and Border Protection, Vermont’s major border crossings at Highgate and Derby Line actually saw 4600 fewer visitors entering Vermont in July 2009 versus the same month last year.

It’s likely those numbers would have been even lower had it not been for the Quad celebration. Moreover, even if Vermont didn’t get the 100,000 additional visitors Hyde was counting on, “I still think the numbers are going to be relatively strong,” he says.

Kraft notes that a City Arts intern from Montréal’s McGill University surveyed French-Canadians on the Burlington Waterfront and Church Street during the two-week festival. He reported that more than 50 percent of the Québecois surveyed had never been to Vermont or Burlington before, came here specifically for this event and, most importantly, said they would return.

“They loved the event,” Kraft adds, “but they talked about the hospitality being phenomenal!”

Other economic indicators suggest that the investment paid off. All the major hotel chains in Burlington and South Burlington — about 1000 total rooms spread among the Marriott, Hilton, Sheraton and Doubletree — routinely report their total occupancy numbers to a national clearinghouse, according to Joe Carton, general manager of the Marriott’s Courtyard Burlington Harbor on Battery Street.

During the two weeks of Burlington’s Quadricentennial celebration, Carton reports that total occupancy at the big hotels was up 13.3 percent over the same period a year before. Presumably, the smaller mom-and-pop operations experienced a spillover.

“I think those are pretty good numbers,” Carton says. “It all came together pretty positively for the lodging industry.”

Kelly Devine, executive director of the Burlington Business Association, has a similar assessment, though the news from her members is mixed: Some did very well, while others were up only modestly over the same time last year.

“Considering the scope of the event, and the fact that it was coming to Burlington when there was a lot of activity on the waterfront already, some people were a bit skeptical,” Devine admits. “It was kind of like taking the busiest time of the year that already exists and adding something on top of it. What I heard a lot was, ‘Bring us an event in September.’”

That said, Devine saw many of her members’ “minds turned” about the Quad celebration once it began. Most of her members on the waterfront, Church Street and in the Burlington Town Center reported increases in foot traffic and sales during the 12-day festival.

Equally important, Devine emphasizes, was the world-class nature of the festival, all the more impressive considering how quickly it was pulled together.

“What they presented, in terms of the quality of the festival, the artistic performances as everything else, definitely reflected well on the Burlington brand,” she adds. Devine echoes the sentiment of others when she says she hopes the city parlays the Quad celebration into annual festivals.

“But the financial piece is a whole other worry from the point of view of the city,” she adds. “It’d be nice to know at the end of the day how this is going to affect the tax base and how the cost of these events is going to be covered.”

No one from Burlington City Hall could answer that question yet — not CEDO Director Larry Kupferman nor City Council President Bill Keogh. Chief Administrative Officer Jonathan Leopold did not return phone calls.

Kraft insists fundraising efforts are still underway and that “the books won’t close on this” until 2011.

For example, Friends of the Quadricentennial, a private civic group, is soliciting contributions from major contributors. Donors who give $1000 or more will get their names engraved in a stone wall in the new Quad Park at the corner of Lake and College streets.

Tourism Commissioner Hyde also points out that the Quad celebration isn’t officially over, either. Statewide events are scheduled well into the fall, notably the “Festival of Nations,” slated for September 19 and 20 at Crown Point and Chimney Point. Federal funding for such events will be available for another two years.

For its part, Burlington, which doesn’t officially end its Quad celebration until First Night on New Year’s Eve, may be eligible for some federal funding, too. But a recent stimulus grant of $50,000 — made out to Burlington City Arts — cannot be used to pay down Quad-related expenses. That cash is slated for visual-art exhibitions.

Kraft notes that plenty of artists were employed by the Quad. “This was Burlington’s WPA project for 2009,” she says. “We put more artists, technicians, suppliers, caterers and seamstresses to work than anybody, at a time when a lot of people were hunkering down.”

Longtime businessman Al Gobeille says he’s heard a lot of talk from his fellow businesspeople about whether the Quad made money or lost money. “I don’t mean to be willy-nilly about it, but I really don’t care,” says the owner of Burlington Bay, Shanty on the Shore, and Breakwater Café and Grill. “This was about creating a fabric of community and historical knowledge. There should be a depth to this that isn’t just about counting pennies.”

As he puts it, “You don’t do a profit-and-loss statement on your birthday party.”