Putting the Fun in Function 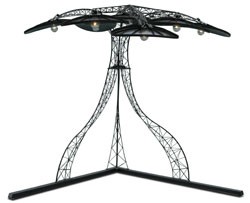 What can you make with 7000 nickels, besides a bank deposit of $350? If you’re Johnny Swing, all that loose change adds up to the perfect material for building a divan.

The Brookline, Vt., artist fuses 5-cent coins together with 35,000 welds and shapes the metal fabric into the surface of a couch. All that coinage is supported by a stainless-steel truss system — 350 feet of what Swing refers to as “stiffing” rods. The elaborate substructure looks something like a suspension bridge, and the end result is a sort of heavy metal fainting couch. Maybe Swing wants to give customers a safe place to sit when they learn the price tag on this piece of his “Obsessive Furniture”: It tops $100,000. (Earlier models have sold for less.)

Swing’s highly polished sofa, now on view at Helen Day Art Center in Stowe, is the 22nd in a limited-edition issue of 25. Swing has made chairs, bowls and boxes from U.S. Treasury coinage, as well as sewn pillows from dollar bills.

For its exhibition “The Shape of Things: Johnny Swing and the Best of Vermont Design 2009,” the Helen Day has turned the main gallery space into a Swing living room, complete with the coinage series, chairs made from “repurposed” baby-food jars, and his praying-mantis-like light fixtures crafted of satellite dishes and Eiffel Tower-style trusses standing 10 feet tall.

The other artists and architects represented in the gallery also blur the line between form and function. Gone is the emphasis on practicality that most ceramicists, jewelry makers, glassblowers, furniture makers and architects generally bring to their work. In “The Shape of Things,” the ordinary object is a form of sculpture.

Could you use the “Bad Beaver Vases” by Paige Russell to hold a sprig of forsythia? Absolutely. Plus, you’d have a good laugh every time you looked at the vase. Russell has let “beavers” take a bite out of her white porcelain cylinders. Each vessel features a carved-out midsection that simulates the tooth marks rodents leave on a tree.

Need a standing lamp for your living room? Riki Moss and Robert Ostermeyer of Studio Glow have created floor lamps from banana-leaf-pulp paper that look like sections of vertebrae.

Brothers Kevin and Jon Racek, the duo behind Stew Design Workshop, have dreamed up two utopian sites for communities, presented here as models and computer-generated drawings. “Quarrytown USA” is a housing project that would be built over an abandoned mine site. “Harvester” is an 84-story mixed-use office and residential tower that would generate its own power and water. In plans for the structure, solar panels sheath the exterior, turbines are embedded inside, and a hole in the top forms part of a rainwater gathering system.

These projects may seem outlandish, but they don’t begin to compare in that regard with David Sellers’ design for Gesundheit Institute, the hospital-cum-clown institute based on the vision of physician Patch Adams. As depicted in the 1998 biopic with Robin Williams, Adams has been bringing his unique brand of healing — which blends clowning and medicine — to prisons, war zones, refugee camps, orphanages and clinics all over the world for the past two decades.

The Gesundheit Institute is Adams’ yet-to-be-fulfilled dream to create a free hospital in the poorest state in America: West Virginia. Silliness is the organizing principle for the establishment, which would be located on a 310-acre donated site on a Hillsboro mountainside. That’s why the hospital campus takes the shape of a head, and the ear, nose and throat clinic features entry through a pair of nostrils.

The institute is currently trying to “funraise” $1 million to build a teaching center and clinic. Though the Sellers & Company project has been in the works since 1984, so far only one structure has been built — a curvaceous three-story “dacha” for volunteers. The Helen Day has devoted an entire room to the project; illustrations, cartoons and architectural plans cover it from floor to ceiling.

In general, Vermont’s designers are renowned for their classical approach to craftsmanship. Think of Vermont Vernacular, Pompanoosuc Mills, Artisans Hand or Frog Hollow. Mod design isn’t typically part of the Green Mountain ethos, but that may be changing. Consider the Shelburne Museum, which has recently brought experimental out-of-state designers to its premises. With “The Shape of Things,” Helen Day has gone a step further, showcasing the work of Vermont-based designers who dare to be hip.