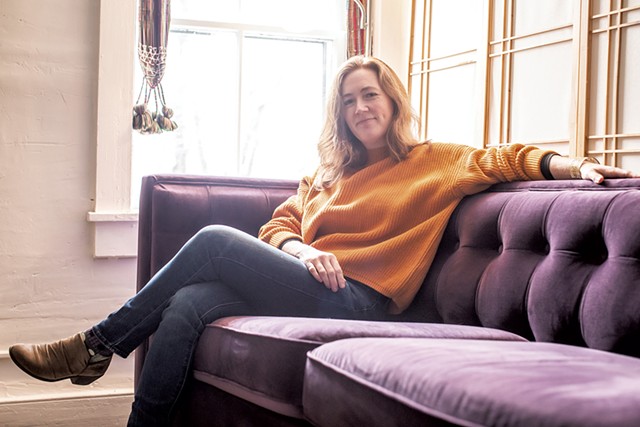 Sarah Lyman hates the word "divorcé(e)." In her view, it has negative connotations, and it doesn't do justice to the learning and growth that happens during a marriage. To replace it, she coined the term "marriage alumni," and she doesn't care if it elicits an eye roll or two.

Lyman, 43, is the founder of PurplCouch, an online divorce resource that launched in November. Through its first course, Fresh Start, she aims to reframe divorce as a positive experience by offering recorded interviews with local lawyers, counselors and financial advisers, plus other content, such as TED Talks and Spotify playlists. PurplCouch provides its students with the tools necessary to sort out the complicated process while taking a broad look at the culture of divorce.

"There isn't the structural support around divorce the way there is around weddings," Lyman explains in the introductory video. "It's really profound loss. But, unlike when you grieve the death of a loved one, no one brings you casseroles."

PurplCouch emerged from her own experience, she told Seven Days. When she started the divorce process a few years ago, she felt lost, confused and alone.

"I spent a lot of time googling," Lyman said. Wading through search results that often offered conflicting advice, she knew there had to be a better way.

With a background in communications and archaeology, Lyman has no training or expertise in divorce herself. She works as the communications manager for Farm to Institution New England, which gets local foods into schools, hospitals, correctional facilities and other institutions.

A sort of Nick Fury of divorce, Lyman assembled her own version of the Avengers — a team of professionals to guide PurplCouch students through the major steps in the process. She conducted video interviews with local experts, including financial planner and certified divorce financial analyst Amanda Peden; family therapist and diversity, equity and inclusion consultant Tabitha Moore; tax adviser Keri Brown; psychologist and anxiety specialist Paul Foxman; and divorce attorney Nanci Smith.

With a price tag of $329, Fresh Start is designed to be taken at the user's own pace. Videos are sequenced but can be watched in any order. Though many online courses require students to keep a workbook or journal of some kind, Lyman keeps hers homework-free.

"I feel like your divorce paperwork, your financial worksheets — that's homework enough," she said.

Early in the course, Lyman details her own divorce story, including a major aha moment as she rebuilt her life post-separation. Among many things, she needed a new couch. After browsing palatable, neutral pieces of which her ex would have approved, she realized that she didn't have to compromise on color or texture. She picked a purple velour sofa, which inspired her new venture's name.

As the course progresses, it delves into some of the more confusing aspects of divorce. In the section on law, Smith lays out four basic forms the process can take. Easiest and cheapest is the DIY version, or "kitchen table" divorce, best for people without complex assets or property to disentangle. Mediation brings a neutral third party to the process. At the other end of the spectrum is litigation, which plays out in the court system and is generally the messiest and most adversarial option.

Smith prefers the collaborative divorce process, which she describes as "mediation on steroids." The interdisciplinary model involves lawyers, mental health counselors and financial professionals working as a team with their clients.

"[Collaborative divorce] is particularly effective because we bring in the mental health coach right at the beginning," Smith said by phone. "Then [the couple] can come down to business when they're psychologically ready to make a deal."

Mental health is a central concern at PurplCouch. In a video called "Benefits & Barriers to Therapy," Lyman recalls a common attitude she used to share: "I had always thought therapy was like the yellow diesel handle at the gas pumps. I'm glad it exists, but it's, like, for other people, right?"

Now she agrees with her experts that mental health care shouldn't be sidelined in the divorce process — especially when children are involved.

"I'm trying to reduce the stigma and increase the comfort level about talking about divorce." Sarah Lyman tweet this

Foxman told Seven Days that people tend to think of the toll divorce takes on children as "an acute stress that happens at a particular point in time." That's a myth, in his view. "What affects children most about divorce is the ongoing co-parent relationship," he said.

Founder and director of the Vermont Center for Anxiety Care, Foxman contributed videos to PurplCouch with titles such as "Styles of Co-parenting," "Dos & Don'ts for Parenting After Divorce," and "Dating & Stepfamilies." In "Benefits & Barriers to Therapy," he notes that many people think that by seeking therapy, they're acknowledging that they alone are the problem.

"[But] in psychology, we don't think in terms of good guys and bad guys," he continues.

Though still a new company, PurplCouch has enrolled a few students. "Jill" came to the course as her 31-year marriage was ending. (Because members of her family and social circle are unaware of her divorce proceedings, Jill asked that Seven Days refer to her with a pseudonym.)

"I didn't know anything about the kinds of divorce before this," Jill said. Like Lyman, she found herself awash in a sea of confusing web content. "I liked knowing [PurplCouch] was researched information from a source I could trust," she said.

Jill said she was lucky to have a good support system. Though PurplCouch is primarily meant for people who are getting divorced, it's also for their friends and allies, with some content tailored for those along for the ride. The course stresses the importance of not isolating yourself during the divorce process.

Having a third party accompany you through the information-gathering process can provide much-needed perspective, Foxman said. He offered the analogy of a stressful medical appointment: "When you're in a high state of anxiety or emotional arousal, your memory's affected, [as is] your understanding of what's happened."

Smith noted that friends of a divorcing couple can best support them by not taking sides. The ideal attitude is, "We don't want you to have a miserable divorce; we don't want to lose both of you as friends; we want to be able to maintain our relationships with you," she said.

Lyman plans to add other courses and continue to hone the Fresh Start curriculum.

"The course is part of a bigger vision," she said. "I'm trying to reduce the stigma and increase the comfort level about talking about divorce."

She envisions a future in which the culture of divorce itself will be transformed. Imagine, for instance, if people could put themselves on a "divorce registry," similar to a wedding or baby shower registry, so their friends would know what they need.

"When people get married ... you literally shower them with gifts," Lyman said. But when you're splitting up a household, she continued, that's when you might need a new couch — or a chocolate basket — the most.

The original print version of this article was headlined "Splitting Headache"