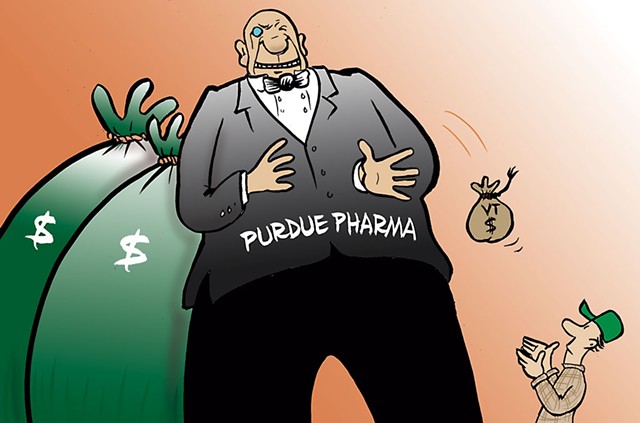 It's not often you thumb your nose at $4.5 billion.

But that's exactly how Vermont Attorney General T.J. Donovan and several other state attorneys general have reacted to the amount the family that profited from Purdue Pharma, the makers of OxyContin, has agreed to cough up. The settlement under consideration would resolve some 3,000 lawsuits filed by communities nationwide, which allege that the company and the family that owns it, the Sacklers, fueled the nation's opioid epidemic by improperly pushing the popular painkiller.

As it stands, Vermont would get a small slice — $13 million — and, like everyone else, would have to wait nine years to get the full sum.

"The Sacklers are walking away pretty damn happy. You get everything dismissed, and you're still a millionaire." Vermont Attorney General T.J. Donovan tweet this

The wait, as well as the meager amount, galled Donovan, who did not sign on to the deal last week. With an estimated family fortune of $11 billion to $13 billion, the Sacklers wouldn't see any change in their lavish lifestyle or pay an adequate price for the havoc they've wreaked, he said.

"The definition of a compromise is where both sides walk away unhappy," Donovan said as his English muffin grew cold during an interview at Handy's Lunch in Burlington. "This isn't going to be a compromise because the Sacklers are walking away pretty damn happy. You get everything dismissed, and you're still a millionaire."

To give you an idea how crummy the deal is, Vermont has received $700 million since 1998 from cigarette manufacturers under a nationwide settlement agreement. In 2020 alone, Vermont got $24 million, and those payments are scheduled to continue indefinitely. (A separate opioid-related settlement, in the works with Johnson & Johnson and three other companies, could net Vermont more than $50 million, Donovan said.)

Donovan's dilemma is how to preserve the state's opposition to the deal without missing out on the payments, even if they don't amount to much. He won't let that happen, so instead of thumbing his nose, he may have to hold his nose and go along. "One is better than zero," he said.

Donovan is shooting for a bigger amount and accelerated payments, particularly for smaller states. But with 15 states, including influential players such as Massachusetts and New York, dropping their previous opposition and agreeing to the settlement last week, leverage is all but gone and the deal could be approved in August.

Donovan and others, including former Vermont U.S. attorney Christina Nolan, shake their heads over how the Sacklers have used their wealth to game the legal system. As part of the settlement, members of the family would be shielded from any further lawsuits. The company would be dissolved and reconstituted, and the Sacklers prohibited from selling prescription drugs again.

Purdue Pharma filed for bankruptcy protection in 2019 as lawsuits mounted. What irks Donovan and Nolan is the Sacklers using bankruptcy courts to provide themselves protection, without having to declare personal bankruptcy.

In his book Empire of Pain: The Secret History of the Sackler Dynasty, author Patrick Radden Keefe lays bare the greed and callousness of the Sacklers as they knowingly continued to push the highly addictive painkiller despite sales documents showing outsize orders from pill mills across the country. By the end of the book, you'd be hard-pressed to explain the difference between the Medellín drug cartel and the Sacklers, except for the suits and gleaming Connecticut corporate headquarters.

The Sacklers "have used their money and influence to play our system like a harp," Keefe wrote last week in a New York Times op-ed about the proposed settlement. "It's hardly news that our society treats [street dealers] with sledgehammer vengeance and people like the Sacklers with velvet gloves."

Nolan's office discovered a kickback scheme by Purdue Pharma that resulted in criminal charges against the company and helped lead to its demise. Purdue was making improper payments to doctors — through a program in which doctors gave speeches at luxurious locales — to induce them to write more opioid prescriptions. Purdue also paid an electronic health records company, Practice Fusion, to use software that improperly prompted doctors to prescribe opioids. A Practice Fusion executive pleaded guilty and agreed to cooperate.

The Sacklers themselves are not protected from criminal prosecution, but most experts say it's unlikely to happen. Company executives are also not immune from prosecution.

In the meantime, Donovan insists his opposition to the settlement isn't grandstanding. In the past 10 years, more than 1,000 Vermonters have died of opioid overdoses, according to Vermont Department of Health figures. And the problem is far from abating: In 2020, 157 Vermonters died from opioid overdoses, an almost 40 percent increase from 114 deaths in 2019.

In 2010, almost 90 percent of opioid-related fatalities involved prescription opioids. Today, while the culprit is much more likely illicit heroin or fentanyl, four out of five of the victims are people who started their opioid habits by misusing prescription drugs.

"I can't just say yes to these guys. I can't do it," Donovan said. "I may end up there, I don't know, but it just seems incredibly unfair to the people whose lives have been ruined."

When the city advertised that two seats on the Airport Commission were opening up, she applied, figuring her 25 years of aviation experience meant she had the right stuff to handle the volunteer post.

Certified flight instructor. Almost four years ferrying cargo and passengers on Boeing 737s for Aloha Airlines. Five years flying 727s for Express One in Europe before that. For the last six years, Guillian has served as director of aviation at Vermont Technical College. She also runs a weeklong aviation camp for youths 12 to 15 years old.

When she attended the first Zoom meeting for applicants on June 2, the five city councilors designated to make recommendations to the full council put off any interviews. With scores of applicants, some of whom had applied for a seat on more than one of the city's commissions, and interviews at four minutes each, the council members were looking at hours of Q&A.

They told the applicants that interviews would be held the following week. In the meantime, the councilors would recommend the incumbent commissioners they thought should serve another term.

It wasn't until she joined the meeting the following week that Guillian learned she wouldn't be interviewed and that the councilors had recommended that the two incumbents whose terms were expiring — Bill Keogh and Tim George — get new three-year terms on the advisory board.

Guillian spoke up during the public forum section.

"I raised my hand, and I said, 'I'm a bit confused; I understood that you would be doing interviews,'" she told Fair Game. "I feel I'm qualified, so it's a little bit of a mystery as to why I wouldn't at least get four minutes of your time." She laid out her credentials, but none of the five councilors was swayed to add her to the list of interviewees.

As it was, the panel did 39 interviews of four minutes each that night for a variety of the commissions.

City Council President Max Tracy (P-Ward 2) said incumbents are generally favored unless there are problems, such as a lack of attendance to meetings. Keogh has been on the airport commission since 2012, George since 2018.

Tracy said he's open to suggestions to make the selection process better. The current system, he noted, is an improvement over the more secretive ways of the past.

That's a cherry on top of an insult.

The best part of WDEV's 90th anniversary celebration was that the Birthday Boy could be there.

That looked doubtful after radio station owner and motorsports legend Ken Squier was hospitalized with COVID-19 last year. The 86-year-old recovered after months of rehab. On Saturday, he held court, sitting on a couch under a tent on a closed-off Stowe Street in front of the radio station in downtown Waterbury.

"Pretty rough couple of months," he told Fair Game in between well-wishers. When they'd invariably say, "It's good to see you, Ken," he'd respond, "Good to be seen."

Gov. Phil Scott was among those thrilled to see Squier. They go way back. Live on the air, Scott said Squier had "taught me a lot about what it means to be a leader in Vermont and doing the right thing. And putting the politics aside ... I can't say enough about what he's done with WDEV," a community hub when disasters such as Tropical Storm Irene hit.

Their father/son relationship was paved on the high-banked asphalt at Thunder Road International SpeedBowl, the Barre racetrack Squier founded and where Scott remains the winningest driver. (He raced last week, finishing 18th.) There's a lot of respect between them — and chop-busting, too.

"Well, listen, here's the real story," Squier told listeners after Scott finished. "We're so thrilled to have him as a governor, because as a stock car driver, he won 40 main events at Thunder Road. And he was two times or three [times] state champion. And we were really worried. What the hell was going to happen to him after he got out of stock car racing? So he found this job up in Montpelier in some building up there, and that's worked out real good for all of us."

"And I'm still going around in circles," Scott piped in.

Afterward, Scott called WDEV's 90 years "an incredible milestone" that he was glad the icon could witness.

"I was really concerned, when Ken got COVID, whether he'd see the 90th celebration, so I'm thrilled to death to be here and to have him here, as well," Scott told Fair Game. The weekend before, Scott ferried Squier around in the sidecar of his motorcycle for the Not Quite Independence Day parade, an offbeat Waterbury tradition.

"They were happier to see Ken than me," Scott smiled.

Community radio has died across the country, but WDEV remains a beacon, an institution Scott called "part of the fabric of Vermont." With an eclectic mix of news, talk, sports, and Saturday morning shows such as "Music to Go to the Dump By" and "For the Birds," it's one of a kind. I know: I worked there for 16 years hosting a daily talk show.

See you at the 100th birthday party, Ken.

In Vermont media news, sportscaster Mike McCune signed off last week after 21 years at WCAX-TV, where he was sports director since 2008. He plans to spend more time with family. And reporter Brittany Wier is leaving ABC 22/ FOX 44 for a TV reporter job in Roanoke, Va. She has worked for the Burlington station since March 2020.

And in the arrivals department, congratulations to VTDigger.org managing editor (and former Fair Game columnist) Paul Heintz and his spouse, Shayla Livingston, on the June 19 birth of their son, Rio. Heintz worked at Seven Days from 2012 to 2020.