Pulling Their Wait: Waiting for Godot 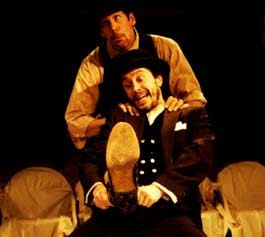 In the Vermont Stage Company production of Samuel Beckett’s absurdist masterpiece, Waiting For Godot, director Mark Nash ingeniously invites audience participation. As they enter the black-box FlynnSpace, theatergoers are instructed to put on the cotton “gowns” found on their seats — “to become part of the scenery,” attendants explain. Once dutifully dressed, the audience becomes a circle of bleached muslin in a dark room, indistinguishable and somehow erased, like the nothingness that surrounds and penetrates the characters on stage in Waiting For Godot. “There’s no lack of void,” one asserts later, looking out at the crowd.

That’s just what Beckett would want, of course. After his 1953 Paris debut of Waiting for Godot, the suddenly famous playwright was plagued with what he called “philistines,” so named for their pretentious, relentless quest to decode the play’s symbols and meaning. He was annoyed that his audiences and critics were always questioning just who, or what, was this Godot? Beckett’s answer: “If I knew I would have said so in the play!”

Accordingly, Nash cautions his audience to “not try to figure it out,” because this play “is best experienced rather than understood … like poetry or music.”

There’s plenty to experience in Beckett’s tragicomedy in two acts. Two hoboes join company to wait day after day for someone named Godot. Meanwhile, two other wanderers cross their path and they all pass the time. That’s it. The entire play. But it’s the stalwart characters — misfits all — that engage the audience so deeply.

The enigmatic Beckett became an overnight celebrity with this work, and ultimately won the Nobel Prize for Literature. More playful than his other solipsistic dramas, Waiting for Godot balances man’s existential predicament and his capacity for faith and courage; isolation and camaraderie; mindfulness and mindlessness; comedy and tragedy. This is characteristic of confrontational, Expressionist drama, which reacted against the humorless dramatic realism that had come before it.

Beckett and other post-war playwrights, such as August Strindberg and Luigi Pirandello, replaced illusionistic staging and coherent action with a new psychological dramaturgy, transforming bare stages into chambers of the subconscious and narrative plot into free association. The influences of Freud and Jung were evident; people were encouraged to look inside themselves for answers.

I’ve seen Waiting for Godot many times; some productions had music — tubular bells! — and some had Chaplinesque clowns. But Vermont Stage Company’s poignant rendition has them all beat. Four strong actors — no weak links here — largely determine the success of this stark drama.

Thanks to Nash’s precise direction, Didi and Gogo wrap their existential ennui in a physical farce. For them, the body and the senses are sources of irritation and annoyance. Both have physical ailments: Didi seems to suffer from an itchy head, and occasionally clutches his crotch — a prostate problem? Gogo’s aching feet stink and his shins throb. Beckett is suggesting, perhaps, that our bodies fail us, too, along with our memory, our language and our gods.

Contrasting with the Laurel and Hardy-esque Didi and Gogo is the master-slave duo of Pozzo and Lucky, who enter midway through each act. A dapper man of the world, Pozzo sports an ascot, monocle and watch fob, but his sadistic treatment of the ironically named Lucky, whom he leads on a rope, suggests an absent conscience. Yet he and his slave seem even more co-dependent than Gogo and Didi.

John D. Alexander nails Pozzo with a mock-heroic hilarity. With a robust gift for comedy, he conveys both the pompous self-certainty and transparent inanity of men who thoughtlessly dominate and exploit the weak. It seems like just desserts when Pozzo becomes blind in the second act, and Lucky becomes the resilient one, guiding Pozzo. With this reversal Beckett offers the view that life’s circumstances are random, an ever-turning wheel of fortune.

It takes a moment to recognize VSC regular Kathryn Blume in Lucky’s grungy costume. She plays an old, androgynous creature, face bruised and swollen, neck bloody from the rope, clothed in layers of fraying rags. Though otherwise nearly catatonic, Lucky is at one point compelled into a very funny dance performance, then a rote, rapid-fire discourse of physics equations and random Latin phrases. Blume plays it well, spouting a torrent of empty words like the Scarecrow in The Wizard of Oz. Like the other characters, Lucky suffers from synaptic disconnect. Nothing matches up here — not words and meaning, not action and words, not yesterday with today or today with tomorrow.

While Lucky spits out his tirade, Pozzo, Didi and Gogo distort their bodies in agony, performing an innovative, grotesque and slow-motion dance. They find the meaningless chatter unbearable and writhe torturously, as if underwater, trying to make Lucky shut up.

But none of the characters can shut up. “We always find something to give us the impression we exist,” says Gogo, shoring up Didi. They try to pass the time, welcoming every minor diversion, caught as they are in a daily treadmill of repetition. They cleave to each other, as if sensing that all their broken parts combined might form one whole. They urge each other on with clichés like “too late to lose heart now” and “time will tell.” They show optimism and wit in the face of murderous boredom. When Gogo suggests, “What about hanging ourselves?” Didi gamely replies, “Hmmm. It’d give us an erection.”

In the end, the sweetest part of Beckett’s vision is that, as we pass the time expecting life to happen, we share our fires for a little while with others in the same predicament. Despite its dreary existential themes, this well-executed and heart warming production makes the waiting worthwhile.