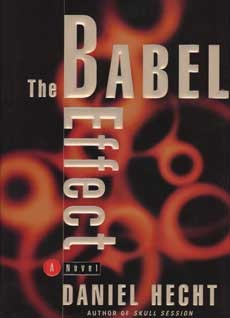 What is the true cause of violence? Is it an integral part of the human animal, or is there another explanation for our blood-spattered history of atrocities, pogroms, wars and murders? This is the question at the heart of The Babel Effect, a new “thriller” by Vermont-based author Daniel Hecht, and the follow-up to his best-selling Skull Session.

Ryan McCloud and his wife, Jessamine, are heads of an elite research group called Genesis, and are commissioned by Boston plutocrat Jason Ridder to, as he puts it, “get to the root of man’s inhumanity to man.” They soon find themselves straying into a virtual minefield of opposed interests. Is it the CIA or the NSA that is trying to intercept their findings, or is it someone closer to home?

Undeterred, the McClouds and their crack team of assorted genius misfits begin by carrying out neuropsychological tests on death-row inmates across the country. Intuition tells them to approach flare-ups of violence by the same methods they have developed to track viral outbreaks. Jessamine, the fiercely intelligent daughter of an African-American judge, is drawn ever deeper into the project. She’s pregnant with her second child and distraught over the murder of her sister, who, while on holiday in Egypt, was gunned down by Arab militants.

Ryan, a Polish-Irish South Boston street kid and high-profile genius travels to a central African state to put his theory to the test by examining Hutus and Tutsis who perpetrated and resisted atrocities, only to be captured by an unbalanced warlord. Meanwhile, Jessamine, hotly pursuing theories of her own, is kidnapped along with a colleague. When Ryan is finally released, he realizes that in order to find his wife and unborn child he must think himself inside her head and find out exactly where her own genius has been leading her.

Described on the book jacket as a “thinking person’s thriller,” The Babel Effect indeed raises a number of important questions, the biggest one of which is exactly how the publishing industry characterizes “thinking people” these days. One has to conclude they’ve deduced the following: Thinking people don’t like to be thrilled, they love acronyms and jargon and, above all, they don’t want to be made to think too much. Because, for a book stuffed with such promising material as kidnap, torture and civil war, The Babel Effect is about as thrilling as an MS-DOS handbook.

Hecht has obviously done a huge amount of research, and has concocted a fascinating and seemingly plausible scientific hypothesis: that violence is not an innate human quality, but is caused by something external, such as exposure to a contaminant or virus. The implications are huge — for one, that we are not and have never been responsible for the horrors we’ve inflicted and suffered; and that school-slayings, domestic beatings, serial murder, even war itself could be eradicated like smallpox.

Hecht’s title comes from a theory of the Genesis team, taking myths such as the Tower of Babel — for which there are many parallels in cultures worldwide — and examining them as outbreaks of disease. In the case of Babel, the “disease” inhibits people’s ability to recognize or communicate with family, loved ones or neighbors.

But as often happens, this is a book that starts with a great idea and fails to build on it. The result is like bad taxidermy: a hard skeleton (the scientific stuff), overlaid with a badly fitting mishmash of stuffing and skin (the plot). The problem is that Hecht’s characters never become more interesting than the central idea. They are badly drawn, two-dimensional and strikingly un-endowed with developed personalities. Their seeming lack of self-awareness is echoed by the actions assigned to them by their creator.

Ryan, supposedly a kind of Southie answer to Stephen Hawking — although in full command of an enviable physique — spends a great deal of time exploding in bouts of rage. He is forever punching things and people and kicking inanimate objects. His coterie of overachievers at Genesis are either winsome maidens, central-casting nerds or foul-mouthed loose cannons. For a man we are presumably meant to imagine as a combination of Hawking and Carl Sagan, Ryan himself is hopelessly inarticulate much of the time.

Much of the scientific material is explained — and hugely simplified — by the third-party narrative. It has to be explained that way, because in the mouths of the characters themselves it often comes out as simply as, “Sure. If you’re right, I’d have to say the human race is fucked in one of three ways” — this spoken by Karl, a bad-boy geneticist. In case we don’t get the message, the narrator sums things up for us:

Translation: fucked temporarily, fucked for the lifespan of everything now living, fucked forever hence, or fucked from the get-go.

Hard-core science, or the cutting edge of the dumb-down movement? Even more of a shame in The Babel Effect are its contradictory messages. The Genesis team conducts its experiments on death-row murderers, but there’s no discussion of their particular inhumanity. Here’s an example of one exchange.

Ryan decided he didn’t like the man. Ianelli must have agreed, because he barked a little laugh and said, “That’s a joke! The only health hazard this guy has to worry about is the lethal injection he’s gonna get in exactly two weeks.”

So much for compassion. And yet the driving force of the book is that compassion and love are the norm for our species, something that Hecht returns to again and again. The Babel Effect implies that all the miseries of life might be treatable. No more violence, no more war. It’s a sweeping dismissal of life’s complexities, not to mention history, economics and religious and cultural differences. If the anti-war drug got into the world’s water supply and cured everyone, no one, we are to believe, would object to economic tyranny any longer. Your third-world country is gutted by the IMF? Not to worry! You can stay home and cuddle your children.

But aside from these theoretical criticisms, the greatest pity is that there just isn’t much excitement here. The writing is flat and matter-of-fact, and expends no effort on things like suspense. The action, such as it is, is passionless and muted, partly because the characters are wooden, partly because there is almost no tension. But most of the action takes place off-stage, in any case. Things never really get going, and many chances for action are missed. There are a couple of quick fights, and one baddie gets a satisfying come-uppance at Ryan’s hands, but that isn’t enough. Worse, most of the plotting is so broad and the descriptions so blunt that surprise is virtually eliminated. Here, Ryan meets one of Ridder’s employees for the first time:

An inner door opened, and a narrow-shouldered man entered. His movements were fluid, but the angles of his immobile face were as sharp as the facets of a Paleolithic spearhead as he crossed the room, eyes on Ryan.

On the same page, the man’s handshake is “as hard as obsidian,” his gaze “stabbed like a switchblade.” This happens less than a tenth of the way through the book. Guess who the villain turns out to be? It would be nice to believe that when publishers look to “thinking people” as a market, they might exercise the little gray cells of their brainy readers. With The Babel Effect, they’ve only proved that being blinded by science is no substitute for good, old-fashioned entertainment.