The U.S. Supreme Court's decision on Friday to eliminate the fundamental right to an abortion established in Roe v. Wade drew universal denunciation from Vermont’s top elected leaders, who stressed that the ruling will not restrict access to the procedure in the state.

Vermonters joined people around the country Friday evening protesting the decision, with rallies at least five towns and cities, including Burlington and Montpelier.

"A woman’s right to choose is a principle we will uphold in Vermont, and we, in fact, have prepared for this unfortunate outcome," said Gov. Phil Scott, a pro-choice Republican, in a written statement. Vermont law guarantees a woman’s right to an abortion, and voters will have the chance to enshrine that in the state constitution this fall.

Slideshow In Burlington, Protesters Vow to Fight on After SCOTUS Abortion Ruling 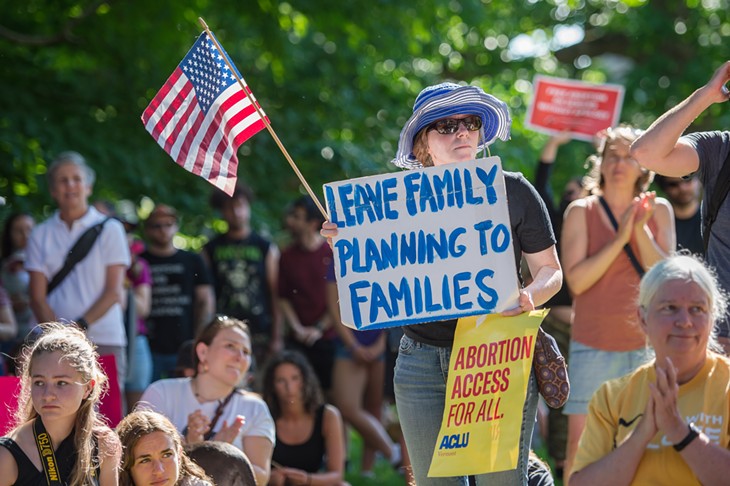 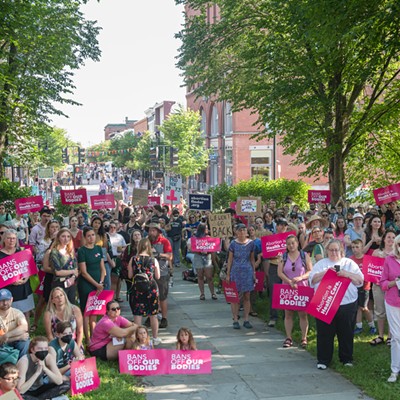 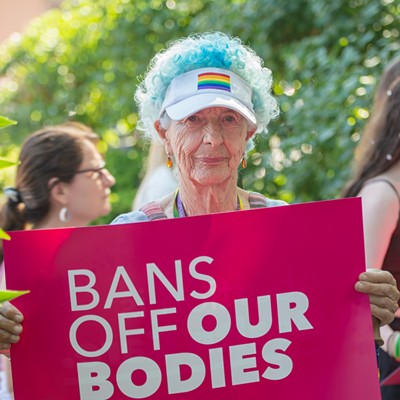 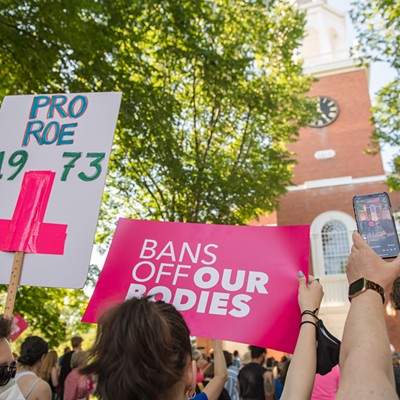 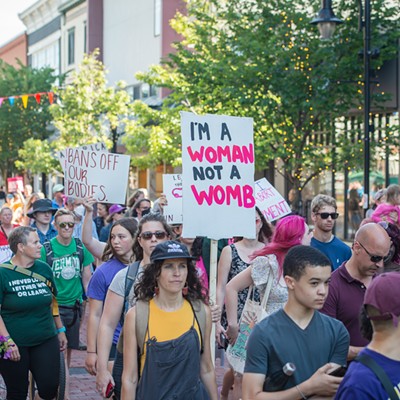 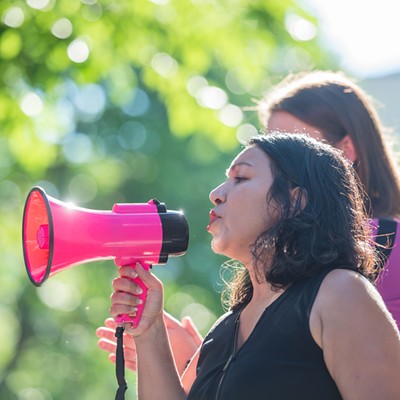 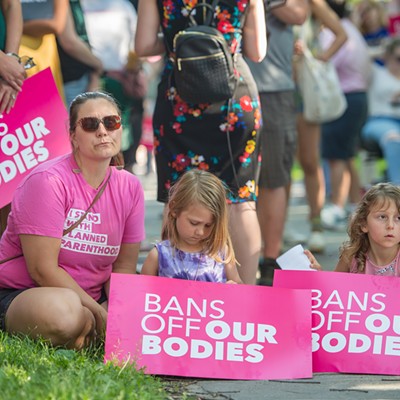 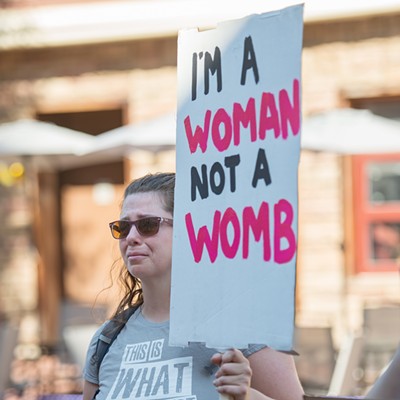 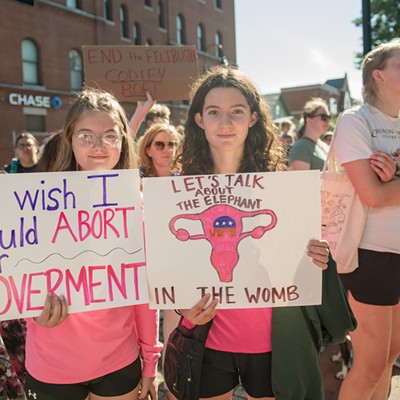 In Burlington, Protesters Vow to Fight on After SCOTUS Abortion Ruling
By Daria Bishop
Click to View 11 slides
"I call on Congress to immediately work to codify the right to choose for all Americans as we have done for Vermonters,” Scott said.

The high court ruling centers on a Mississippi law that limited access to abortions after 15 weeks. The state passed the law four years ago with a specific goal of challenging the nearly 50-year-old legal precedent established in Roe, as well as Planned Parenthood v. Casey, which reaffirmed the right to abortion in 1992.

In Friday’s 6-3 decision, which echoed a leaked draft opinion last month, the court’s conservative majority not only upheld the Mississippi law but also overturned the two older cases.

“As of today, this Court holds, a State can always force a woman to give birth, prohibiting even the earliest abortions,” read the dissent. “A State can thus transform what, when freely undertaken, is a wonder into what, when forced, may be a nightmare.”

“With sorrow — for this court, but more, for the many millions of American women who have today lost a fundamental constitutional protection — we dissent,” the justices concluded.

The ruling is the culmination of a decades-long campaign by abortion opponents and Republican lawmakers to fill the country’s highest court with conservative justices sympathetic to their cause.

SCOTUS Doesn't Know How Abortion Rights Affect Women, Alito Wrote. A Midd Prof Says Otherwise.
By Derek Brouwer
News
Free to decide for themselves whether to allow abortions, at least half of U.S. states are expected to restrict or even outlaw the procedure.

“The Supreme Court has now officially given politicians permission to control what we do with our bodies, deciding that we can no longer be trusted to determine the course for our own lives,” Lucy Leriche, vice president of public affairs at the Planned Parenthood Vermont Action Fund, told reporters Friday afternoon. “This dangerous and chilling decision will have devastating consequences across the country, forcing people to travel hundreds, sometimes thousands, of miles for care or remain pregnant.”

A group of Vermont health care organizations echoed that concern, saying the decision will have a disproportionate impact on lower-income people who can less easily take time off work or pay travel expenses.

"Every person should have the right to control their own health care decisions, including the right to abortion care," the group wrote in a statement. "As health care organizations, we strongly believe that abortion services should be treated like any other health care service. "

Vermont's three-member Congressional delegation reacted to the news with a mix of despair and calls for action.

In a statement, Sen. Patrick Leahy (D-Vt.), a former prosecutor, accused the high court of abandoning the American public, a majority of which supports legal abortion. He said he feared the decision would have ramifications on "generations to come," and he called out his Republican colleagues for "hypocrisy of the highest order."

Leaked SCOTUS Abortion Ruling Is Likely to Buoy Prop 5 Support in Vermont
By Kevin McCallum
Education
“For years I have heard Republicans in the Senate talk about limited government, about their worries that government interferes too much with our daily lives,” he said. “Today, I ask them, is there any more significant interference than that of getting between a woman, or any person, and their health care choices?”

Rep. Peter Welch (D-Vt.) and Sen. Bernie Sanders (I-Vt.) said in separate statements that Congress must finally eliminate the filibuster so that the existing Democratic majority can push through legislation to codify legal abortion nationwide. "This decision cannot be allowed to stand," Sanders said in his statement.

President Joe Biden, meanwhile, called the decision a “tragic error” during a televised address at the White House and urged voters to elect lawmakers who will pass federal abortion legislation. “Roe is on the ballot,” he said.

The national abortion landscape is expected to quickly change. Thirteen states have previously enacted what are known as “trigger bans,” designed to outlaw abortions within 30 days of Roe being overturned. At least a dozen more are expected to revive laws previously struck down by the courts or move forward with fresh legislative efforts.

Vermont, meanwhile, is poised to move in the opposite direction. Looking to build on a 2019 state law that guarantees the right to abortions, a November ballot item will ask voters whether they wish to enshrine the protection into Vermont's constitution. It is expected to pass.

Experts aren’t sure whether Vermont will see a large influx of abortion seekers in the post-Roe world, due in part to the fact that the state is surrounded by others in the Northeast where abortion is expected to remain legal.

“But honestly, nobody knows,” said Leriche, of Planned Parenthood. “We can model all day long, but it's the reality that will show us what in fact is going to happen.”

Equally unclear is what might come next. In a concurring opinion in favor of overturning Roe, Justice Clarence Thomas wrote the same rationale used to overturn the legal precedent could be used to reverse other cases where the court has established different rights. He encouraged the court to “reconsider” three decisions in particular that protected the rights to contraception, same-sex consensual relations and same-sex marriage.

The majority opinion, written by Justice Samuel Alito, repeatedly sought to distinguish abortion from those issues. “We emphasize that our decision concerns the constitutional right to abortion and no other right,” Alito wrote. “Nothing in this opinion should be understood to cast doubt on precedents that do not concern abortion.”

The three liberal justices were skeptical. “No one should be confident that this majority is done with its work,” they wrote.