Gregory Fitzgerald appeared before a Superior Court judge on January 12 and calmly confessed to what overwhelming evidence had already convinced a jury of long ago: that in May 1993, he traveled from Texas to his wife's condo in Shelburne and strangled her.

The 64-year-old convicted murderer's voice was barely audible as he testified remotely from prison in Springfield, where he has been serving a life sentence without the possibility of parole, the harshest possible term in Vermont. He told Judge Samuel Hoar that he is no longer "the same person" who had schemed to murder Amy Fitzgerald, a 30-year-old Gulf War veteran and University of Vermont graduate student, in cold blood.

"I understand what I did ruined lives," he said. "But I am sorry. Nothing I can say will bring them back. I don't know what else to say."

The admission was a significant reversal for a man who had insisted he was innocent before and after his 1994 trial. In the years since, courts have consistently rebuffed his numerous attempts, using various legal strategies, to get a break on his throw-away-the-key sentence.

"It makes no sense that they would just throw up the white flag like this." Dave Zeltserman tweet this

But this time, Fitzgerald had a clear incentive to admit his crime — freedom. His latest batch of appeals landed before Chittenden County State's Attorney Sarah George, who opposes life-without-parole sentences as inhumane. George's office offered to settle the cases by resentencing Fitzgerald to 35 years to life, so long as he admitted his guilt. Accounting for good-time credit, the deal would enable Fitzgerald to seek parole as soon as this year. He took it without hesitation.

While George contends that the settlement with Fitzgerald was legally sound because the murderer brought a credible appeal, the move also reflects the prosecutor's restorative vision of criminal justice, which she has applied even in the seemingly most unpalatable cases. She acknowledges that her opposition to life sentences influenced her decision.

Amy's two older brothers say they're stunned that George cut a deal with their sister's murderer rather than vigorously defend the conviction and sentence already on the books. 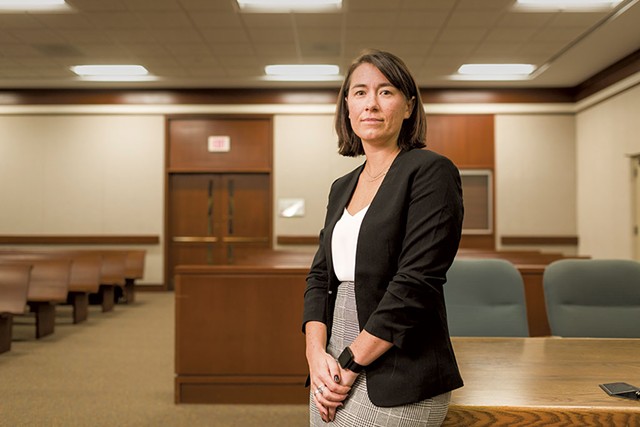 "It makes no sense that they would just throw up the white flag like this," said Dave Zeltserman, 62. "It means that anyone, if they are persistent enough, can keep filing enough bullshit appeals and get out."

Zeltserman, who lives outside Boston, pleaded with George and, later, Judge Hoar not to resentence Amy's husband, whom he described at the hearing as a calculating "psychopath."

"For him to confess in open court meant nothing," Zeltserman said in an interview several days later. "He'll say and do anything to get out."

Amy Fitzgerald was a decorated U.S. Army captain who earned a prestigious Douglas MacArthur Leadership Award for her role in establishing a blood supply system in Iraq during the Gulf War's ground offensive. After the war, she took leave to get her master's degree at UVM. Her husband told her he was enrolled at the University of Texas, but he was really living a double life, using a fake name and soliciting prostitutes. As Amy planned to buy Gregory a sailboat as a graduation present, he was developing an elaborate scheme to murder her and cover his tracks.

She was discovered dead in her Shelburne bathroom three days after neighbors heard screams in the middle of the night.

The agreement to resentence Gregory Fitzgerald stems from his claim that his trial lawyer in 1994, Peter Langrock, did not accurately convey a plea offer from state prosecutors that could have yielded a 30-year prison sentence. He also claimed Langrock did not explain that Fitzgerald could face life without parole if convicted at trial.

Fitzgerald was able to produce two letters from the time that showed discrepancies in how prosecutors conveyed a plea offer to Langrock with how the defense attorney relayed it to Fitzgerald. Further, Langrock testified during a 2014 hearing that he did not tell Fitzgerald that he faced life without parole. George described Fitzgerald's ineffective counsel claim as a "huge problem" for the state. "We had no counterevidence," she said.

A Vermont Superior Court judge had reviewed Fitzgerald's claim in 2014 but concluded he was not harmed by the apparent error because he "failed to establish that he would have accepted the offer," court records show. Due to an attorney's error in his appeal of that ruling, the Vermont Supreme Court never directly weighed in.

Langrock, one of the most seasoned criminal defense attorneys in Vermont, already had decades of experience by the 1990s, when Fitzgerald was claiming the attorney failed at his basic duties. In an interview last week, Langrock said the likelihood that he didn't convey the plea was "one in a thousand," though he couldn't rule it out.

"I do remember that Greg insisted upon his innocence and indicated to us at the time that that was his motivating force in going forward [with a trial]," Langrock said.

Amy's other brother, Alan Zeltserman, said George's office did not adequately consult him or Dave as it pursued a settlement. The way the deal came together so quickly, Alan said by email from Japan, suggests that it was more about George's own "agenda" than the "requirements of fairness and justice."

"I understand what I did ruined lives. But I am sorry. Nothing I can say will bring them back. I don't know what else to say." Gregory Fitzgerald tweet this

Adding to the sting, Judge Hoar initially approved the settlement agreement without scheduling a hearing where the victim's family would have a right to be heard. The judge corrected his mistake and scheduled a hearing on short notice, leaving Alan and Dave just a couple of days to prepare statements about a deal they say they didn't fully understand. Following a tearful plea by Dave, Judge Hoar said he wasn't in a position to second-guess the state's attorney, so long as the settlement was reasonable.

Others have. In 2019, George dropped criminal charges against three people accused of murder or attempted murder, including one who hacked his wife with a meat cleaver, after experts opined that they were insane at the time of the offense. Vermont Attorney General T.J. Donovan subsequently refiled charges in all three cases, arguing that the insanity claims should be put to a jury and that victims' families should have a say.

One of the defendants was Veronica Lewis, who shot her gun range instructor in Westford. She later took a plea deal that means she'll serve 10 years to life in prison.

Only 14 people, including Fitzgerald, were serving life-without-parole sentences in Vermont in 2016, according to one analysis.

Criminal justice reform advocates, including George and Donovan, have sought to make Vermont the first state to eliminate the sentence altogether. The most recent bill, introduced in 2021 by Sen. Kesha Ram Hinsdale (D-Chittenden), would require that anyone sentenced to life imprisonment be eligible for parole consideration after 25 years. The bill has not had a hearing in the Senate Judiciary Committee. The committee's chair, Sen. Dick Sears (D-Bennington), sponsored an earlier, more limited iteration of the bill that cleared the Senate in 2020 but did not get a hearing in the House. He's not convinced the issue has gained enough support since.

"Most of the cases where someone gets life without parole in Vermont are some of the most heinous crimes ever committed in the state," he said. "It's a difficult bill."

But prisoners sentenced to life without parole are "literally thrown away," George said. "And I just don't personally believe in throwing humans away."

She said research shows that most people can be redeemed and should have an opportunity to demonstrate that while they are incarcerated. The prospect of parole also provides an incentive for good behavior in prison, she said, suggesting that Fitzgerald's dogged pursuit of freedom may be one reason he logged no disciplinary reports during his decades behind bars.

Ram Hinsdale's bill would be retroactive, meaning it would include people such as Fitzgerald who are already serving sentences of life without parole. That provision is a deal breaker for Sears, but George sees it as an important part of the reform.

"If we are deciding as a state that we are not going to be the type of state or people that do this, then from my perspective, we need to also right the wrongs that we've done in the past," she said.

To Dave Zeltserman, who still won't visit Burlington because of the pain he knows it would provoke, Amy's survivors have lost their only solace following her murder.

"The Vermont courts stood up for her, and they did the right thing," he said. "Taking that away just kind of strips away whatever my sister had left."

The original print version of this article was headlined "Sentence Served?"