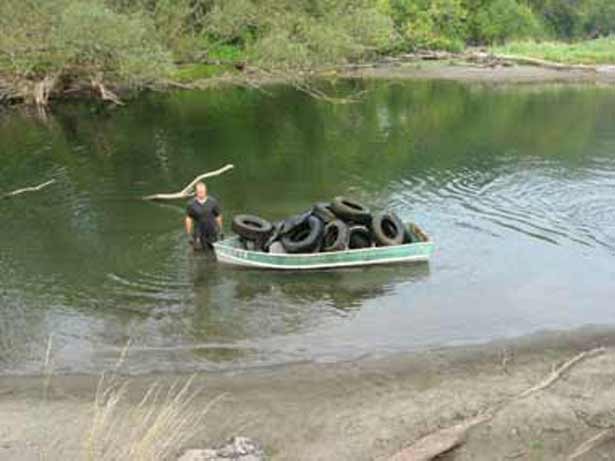 MONTPELIER - Last Saturday, more than 40 volunteers climbed into rowboats on the Winooski River in Montpelier, and it wasn't to take a sunset cruise. The boaters were dredging scrap tires, a common throwaway item that continues to turn up in Vermont's waterways and spark debate over what the state should do about the dumping. In addition to being unsightly and disturbing riparian life, submerged tires can adversely affect river ecosystems by leaching substances such as cadmium, according to the Vermont Natural Resources Council.

Two Vermont legislators have taken notice and are drafting a bill that would require tire distributors to charge an extra $1 disposal fee on each tire sold. The bill, which Representatives Jon Anderson (D-Montpelier) and Jim McCullough (D-Williston) plan on introducing this winter, would funnel the money directly to the state's 10 solid-waste-management districts, which collect and dispose of tires.

Opinions are mixed regarding the effectiveness of the proposed legislation. While environmentalists welcome the bill as a step in the right direction, a tire-industry lobbyist questions the severity of Vermont's tire-dumping problem, and a regional solid-waste-district director suggests the bill frames the debate too narrowly.

McCullough, who serves on the House Fish, Wildlife and Water Resources Committee, said the tire bill is just one of several he's been working on that address an "ongoing" statewide problem. He's been working on tire-specific legislation for more than a decade. Tire dumping "is one of those things that's pretty hard to document," admits the Williston rep who runs the Catamount Outdoor Center. "But it appears that there's a pretty substantial problem."

According to 2003 Environmental Protection Agency figures, Americans discard approximately 300 million tires a year - the equivalent of one tire per citizen. In Vermont, that would translate to more than half a million tires. In 2003, about 100 million tires were recycled in the U.S.; some 130 million were burned as "tire-derived fuel." Last November, tires made local headlines when Vermont environmental groups and Republican Governor Jim Douglas criticized an International Paper facility in Ticonderoga, N.Y. - across the lake from Addison County - for planning to burn tires as a source of fuel without proper pollution controls. After a brief test burn, the Tennessee-based company discontinued the project.

The leading opponent of Anderson and McCullough's bill is the Maine-based New England Tire and Service Association (NETSA). Speaking with Seven Days from a charity golf event in Massachusetts, NETSA Executive Director Dick Cole says that, unlike in other New England states such as Maine and Rhode Island, "There are no major illegal dump sites in Vermont." He bases his claim on information provided by national lobbying organizations such as the Tire Industry Association and the Rubber Manufacturers Association.

In addition, Cole wonders why tires are being singled out in the first place. "[Of] those that have written Representative Anderson, almost all of them have said that it's not just tires," he insists. "It's computer stuff, couches, TVs, shopping carts, all kinds of things. Do we now tax a dollar on every TV that's sold . . . on and on? Or do we try to enforce the current laws?"

Ann Smith, program director for the Montpelier environmental group Friends of the Winooski River, sees Cole's point - sort of. "Last year, we pulled 72 tires out of the river," she counters. "I don't think we had a single couch or TV." But Smith does worry that consumer tire-disposal fees - which in Vermont range from zero to several dollars per tire - can encourage illegal dumping.

Friends of the Winooski River sponsors annual river clean-ups. At last Saturday's event, more than 40 volunteers salvaged tires. NETSA's Dick Cole attended as a self-described "observer," checking to see whether the tires were recently dumped or leftovers from previous years. His evaluation of the cleanup is still pending.

This Thursday, Cole will join Montpelier High School students for a second river cleanup. But Ann Smith is wary of his cooperative spirit. "I don't want to see this one cleanup held up as 'here's the answer,' or a proof," she cautions. "It needs to be looked at as a broader issue."

Officials at Montpelier's Central Vermont Solid Waste Management District (CVSWMD) also recognize tire dumping as a serious issue facing the state, but say more needs to be done. In the last 10 years, CVSWMD has cleaned up almost 9000 tires from 55 illegal dump sites, including the Winooski River. District Director Donna Barlow Casey says that even if this new bill were to pass, it wouldn't be much more than a "good step." That's because the extra money would only be a "minimal" help in balancing an already tight operating budget.

"I think that the ultimate solution on tires is some sort of effort to create markets and . . . producer responsibility," Barlow Casey suggests, "around a system that allows the tires to be remanufactured or recycled in a way that's environmentally beneficial."

Barlow Casey's vision won't be realized for a while, however - if ever. Last year, CSWD recovered fewer than one in 10 scrap tires. "Right now, even if all the tires were able to be collected and no more to be illegally dumped, there aren't sufficient uses for the end material for that system to be sustainable," she notes. "And there's not a lot of work being focused on pushing that responsibility upstream."