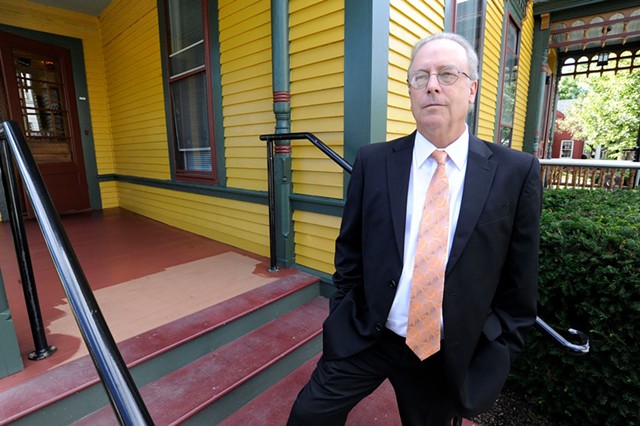 The State of Vermont spends $14 million a year on economic development programs, including tax credits, marketing assistance and downtown revitalization. Vermont isn't alone; virtually every state has similar efforts designed to grow jobs and attract business. The problem is, according to a new report, there's little to no evidence that these kinds of programs have any real effect.

The report comes from State Auditor Doug Hoffer. It's not an audit, per se, but an exploration of published academic studies.

Hoffer targets five state programs as evidence free. The Vermont Employment Growth Incentive, a job program, and the Vermont Training Program, which awards state grants for training workers, both depend on what Hoffer calls "unsubstantiated claims by applicants" that business expansion would not happen without the state aid.

He has a similar beef with tax increment financing, a program to boost struggling areas by borrowing against future revenue growth. Applicants must state that the TIF program is essential to projected growth — the so-called "but for" test — but Hoffer noted that "this is impossible to prove."

"The peer-reviewed literature is very clear," Hoffer said. "An awful lot of this money is supporting growth that would have happened anyway."

The auditor also argued that it's impossible to evaluate the state's roughly $3.5 million per year in tourism marketing because its impact is obscured by the tourism industry's nearly $100 million in advertising and marketing.

So which dollars are responsible for which gains?

"If you can't answer that question, how can you justify spending three and a half million dollars a year?" Hoffer said.

"An awful lot of this money is supporting growth that would have happened anyway." Doug Hoffer tweet this

Rep. Janet Ancel (D-Calais), chair of the tax-writing House Ways and Means Committee, pronounced Hoffer's report "very helpful. Doug Hoffer has been absolutely consistent that we need to be able to measure results."

But a few moments later, she said, "It's a question of trying to make investments as carefully as possible, bearing in mind we can't measure the results."

More of the same comes from Secretary of Commerce Michael Schirling, whose agency administers most of these programs. "Testing 'but for' is impossible to audit. We don't dispute that," he said. "But help from VEGI, VTP and other programs is critical to expanding business in Vermont."

So the programs' impact can't be measured, but even so, they are "critical"?

I smell a paradox.

Some lawmakers are receptive to Hoffer's arguments. "This report is a great antidote to what passes for conventional wisdom in this state when we talk about economic development," said Rep. Tom Stevens (D-Waterbury), vice chair of the House General, Housing and Military Affairs Committee.

That conventional wisdom is widely shared. "There's not a state that hasn't struggled with this," said Ancel. "We've been more cautious [than most]."

Just look at New York State. In Gov. Andrew Cuomo's seven years in office, the state has spent more than $10 billion on economic development programs. Many have gone bust, fallen far short of their promise or been riddled by corruption.

If these programs are so unproven, why does every state employ them?

Because every state employs them.

"We're on a playing field that everyone is on, and we can't leave it," said Schirling.

Too bad, because Hoffer's report cites a number of strategies that can, in fact, make a big difference. They include technical assistance and financing help for growing businesses, workforce development (broadly speaking, not special deals with single companies), energy efficiency, affordable housing, broadband and childcare.

Many of these are not traditionally labeled "economic development," but Hoffer said they should be. When CEOs are asked how they make siting decisions, Hoffer said, "the three most important are quality of life, infrastructure, and workforce education and training."

Will Hoffer's report overturn conventional wisdom? Doubtful. In the case of economic development programs, "We've always done it this way" remains a powerful, if unquantifiable, argument.

Sunday was a big day for Vermont's 2018 political campaigns. For the first time in three months, and the last time before the August 14 primary, candidates for state offices had to publicly disclose how much they'd raised and spent.

The biggest news: a money shortage in the gubernatorial race. Not a single candidate cracked the $100,000 mark in the past three months. That's a pittance by recent standards. Republican Gov. Phil Scott raised $93,000. His primary opponent, Keith Stern, raised $30,000, mostly from himself. Democrat Christine Hallquist was a few thousand behind Scott. The other three Dems, James Ehlers, Brenda Siegel and Ethan Sonneborn, were far behind.

"It's a tough environment," said Vermont Democratic Party chair Terje Anderson. "It'll be easier once we have a nominee.

"A lot of our big donors have gone to other groups — political action committees, independent groups, campaigns in other states," he continued. OK, but it might also have something to do with the unconventional and inexperienced nature of the Democratic field.

Team Scott has its own explanation. "The Governor has focused on governing, and as you know the legislative session just ended in late June," said Scott's campaign manager, Brittney Wilson. "We'll begin to ramp up our efforts this month."

Even so, that's an awfully low total for a popular, business-friendly incumbent.

The other statewide race that could be competitive is the campaign for lieutenant governor, pitting incumbent Progressive/Democrat David Zuckerman against House Minority Leader Don Turner (R-Milton). In terms of money, they're almost dead even: Each raised roughly $48,000 in the past three months. But Zuckerman had a much broader donor base, while some of Turner's most generous backers have already given the individual maximum of $4,000.

The costliest legislative race of 2018 may be in Stowe, where incumbent Republican Heidi Scheuermann has raised $10,000 and Democrat Marina Meerburg, who entered the race on June 20, has received donations of more than $5,000. By Vermont House standards, that's a lot of cash. Scheuermann hasn't faced an opponent since her first run in 2006.

"People are ready for a change," said Meerburg. "The demographics have shifted."

Scheuermann pronounced herself "energized" by the challenge and confident of victory.

Some first-time candidates have notable fundraising totals. Democrat Sara Coffey of Guilford, who's running for the seat being vacated by Republican Mike Hebert of Vernon, has raised $17,500. Emilie Kornheiser of Brattleboro, who's taking on incumbent Valerie Stuart in the Democratic primary, has raised $12,000, while Stuart has raised $3,725.

Other notable House first-timers: Democrat John Killacky of South Burlington, former executive director of the Flynn Center for the Performing Arts, has raised nearly $12,000. Nonprofit manager, editor and writer Kathleen James of Manchester has amassed $18,000 to run as a Democrat in a two-seat district currently represented by Democrat Cynthia Browning and Republican Brian Keefe. And Republican newcomer Zac Mayo, who hopes to replace the retiring Rep. Bernie Juskiewicz (R-Cambridge), has raised nearly $10,000. He loaned himself nearly half of that amount.

On the Senate side, three newcomers are making noise. Republican Alex Farrell, who's trying to crack the Dem/Prog monopoly in the Chittenden County Senate district, has raised $22,000. Rep. Corey Parent (R-St.Albans) has taken in $16,000 in his bid for a Franklin County Senate seat, including $3,060 from Carol Breuer and her husband, Tom Breuer, and another $1,530 from Tom's software company, Valetude. (The Breuers were part of a coordinated effort that funneled nearly $100,000 to targeted Republican House candidates in 2016.) And Ruth Hardy, former head of Emerge Vermont, the nonprofit that trains female Democratic candidates, has raised $13,000 in her bid to become one of Addison County's two senators.

All three of Vermont's political parties compile voter data and make it available to their candidates. Usually.

This year, each party is being accused of stacking the deck.

Ben Mitchell, a Welch opponent and educator from Putney, also says he's been shut out. "I have reached out to the Democrats for voter data and have been met with crickets, not even a reply," he said.

"Ben Mitchell has never requested access," countered party chair Anderson. "He contacted us about terms, and we responded. We never received a request."

Anderson confirmed Freilich's rejection. In 2010, Freilich ran as a Democrat against incumbent Sen. Patrick Leahy (D-Vt.). After losing the primary, Freilich refiled as an independent. When Leahy won in November, Freilich withdrew from the scene. He "showed no interest in the Democratic Party," said Anderson. "No donations, no activity, no involvement." Party leaders decided Freilich wasn't committed enough to the party.

Anderson pointed out that most state parties refuse to share their data with candidates challenging Dem incumbents. "In Vermont, we take it on a case-by-case basis."

Steve May, a Prog/Dem candidate for state Senate in Chittenden County, was able to get the Dems' voter files, but he claims the Progressives have turned him away. The party's executive director, Josh Wronski, offers a bit of a catch-22: "No one has received a nomination at this point for the Senate race," he said. "Any candidate who receives the nomination and endorsement is eligible to access [the data]."

So what about incumbents such as Senate President Pro Tempore Tim Ashe (D/P-Chittenden) and Sen. Chris Pearson (P/D-Chittenden)? Can they get the data? Said Wronski: "Both have been endorsed previously by the Progressive Party."

In Republican ranks, there's the curious case of John Nagle, a first-time candidate in a two-person district in Colchester that's currently represented by one Democrat and one Republican. Nagle is on the Republican ballot alongside incumbent Patrick Brennan. He says he's been blocked from accessing a website-building program offered by the VTGOP and from getting its voter files, as well. "They talked me into running," he said. "Now they're setting me up to lose." That includes, he asserted, getting a local Republican to run as a write-in candidate in a bid to knock him out in the primary.

VTGOP chair Deb Billado has a very different version of these events. "All candidates have access to all our tools," she said. She blames Nagle for failing to follow through on opportunities to get training and access and denies that he's being shut out. "The party takes no position. We wait for the primary and support whoever wins."

Nagle, a retired welder who's now on disability, sums it all up: "I thought being a welder was a dirty job. This is far worse."