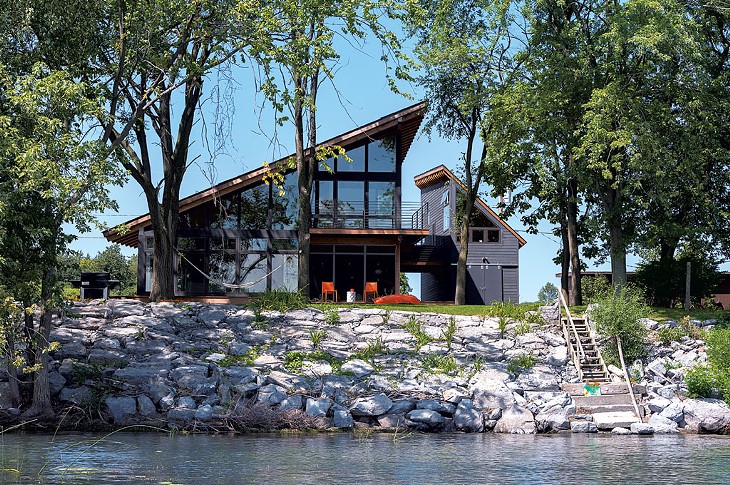 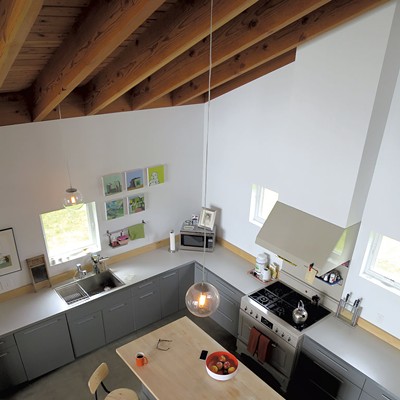 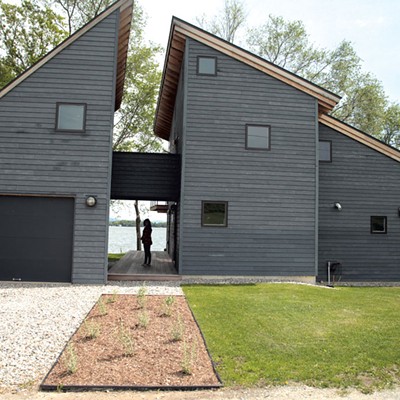 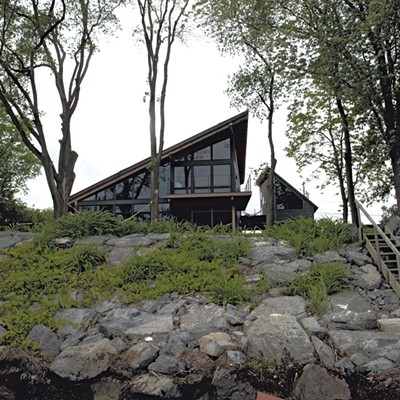 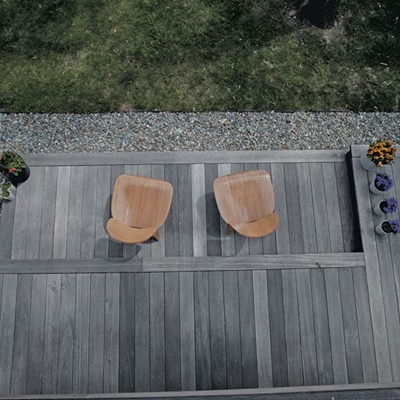 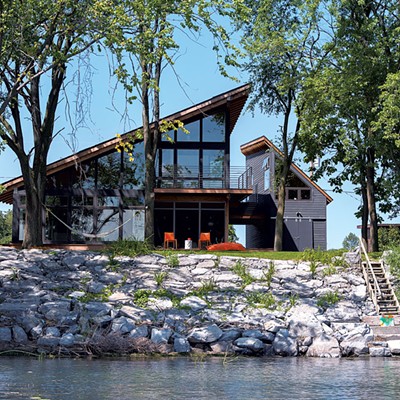 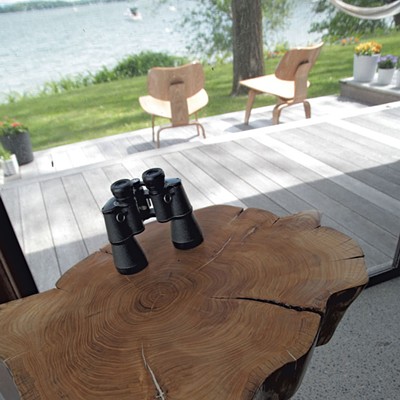 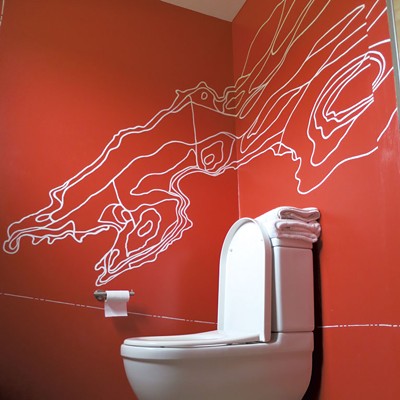 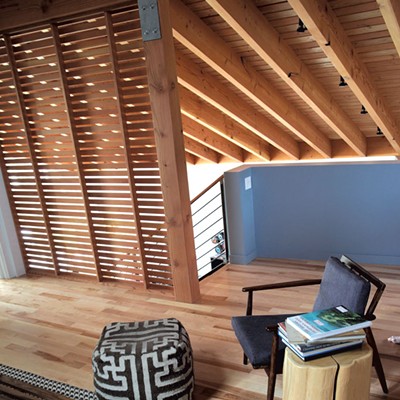 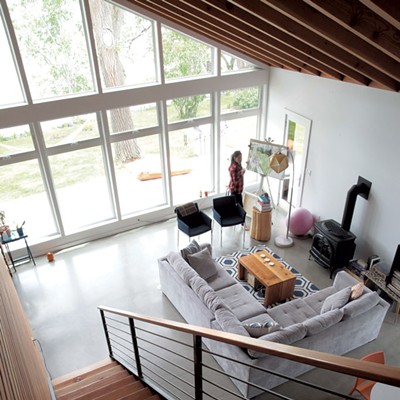 Architectural designer Kristen L'Esperance was barely out of grad school at Pratt Institute, and looking at a bleak job market, when she fell into a plum professional project that she calls "the second half of my education." The job? Designing a house for her father. All by herself. And project managing the construction.

Sleek and modern, Projector House is the impressive result. On Lanes Lane (yes, really) in Charlotte, the angular structure sits on the foundation of a previous home that burned down — and in which L'Esperance grew up.

"This property has been in my family for generations," she explains to a guest while preparing lunch. "My Uncle Bob had the first house here. Then my parents bought it." As a child, L'Esperance admits, she hated living in what she jokingly calls the "redneck end" of Thompson's Point. "I felt like an exile," she says. When she was about 14, the family moved into Shelburne, where her father owns the Chimney Sweep Fireplace Shop.

Now, much to her surprise, L'Esperance is living on Lanes Lane again. But in the Projector House, it's a whole different experience. At 35, she's a grown-up; she has a car, as do her friends. And this house welcomes visitors. Though its footprint is modest, L'Esperance has taken advantage of vertical space. The first level has an open floor plan with a soaring, two-story ceiling; the 2,600-square-foot house has ample sleeping quarters and other private nooks, including a cozy loft attainable by ladder. A separate building, connected to the house by a short breezeway, houses L'Esperance's art studio — she's also a painter and printmaker — and can serve as a guest bedroom.

These creatively conceived and constructed spaces are not the only virtues of the Projector House. Its primary structural attribute accounts for its name: a strict "projection" toward the lake. "The idea is, projection works similarly to our eyes — 60 degrees with the edges fuzzy," L'Esperance explains.

To create that orientation, floor-to-ceiling windows at the back of the house direct the gaze outward to Town Farm Bay. Horizontal Douglas fir boards along an interior wall enhance the effect. And, the designer points out, the few windows on the sides and front have intentionally been placed above eye level. When you're inside, you can't tell how close the next-door neighbor's house is, or that Projector House is a couple dozen feet from the road. It's just you and the water.

"Because I grew up here, I already knew what was important about this site, where the sun comes up, the sight lines and the hottest part of the house," says L'Esperance. "The only thing, upon first glance, that's good about this site is that lake view."

In the Thompson's Point neighborhood, which is primarily a summer community, residents own their houses but lease their land. After the fire destroyed the house in 2010, her father initially considered selling it, L'Esperance says. Then he asked his newly trained daughter to design a new one.

"At first I said no," she admits. "But then, out of necessity, I had to move back to Vermont [from New York]. I thought, Oh, great — I have to find a job in Vermont in the recession. I told my dad I would design a house and handle construction," L'Esperance says, "but, You are not a client!"

Building a house is stressful under the best of circumstances, never mind with parental oversight. But complete it she did, in 2012. L'Esperance's parents, she says, "spend pretty much every Sunday in summer here." For her, Projector House is a thoughtful, streamlined showpiece in a growing design portfolio. As an apprentice with Essex Junction-based architect John Q. Doane, L'Esperance is on her way to becoming a licensed architect in Vermont, she says happily.

Projector House isn't just a demonstration of her skills but, thanks to a couple of energy-efficient woodstoves and passive solar heat, her year-round home. Though it was originally built to sell, keeping the home in the family seems like the way to go for now. "I decided to embrace it," L'Esperance says. "This house is so special, and I'm so lucky."

The original print version of this article was headlined "Working theAngles"