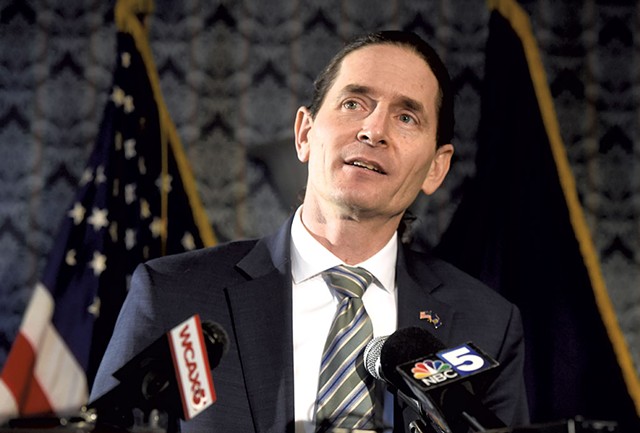 Plans by two top Vermont Progressive Party-affiliated politicians to run for governor and lieutenant governor this year have made party supporters giddy at the prospect of Progs reaching a new pinnacle of influence in Vermont.

Both men will also seek the Democratic Party nomination — a strategy each has used in the past and one that marks the growing alignment of the two parties in Vermont.

While the party's roots stretch back to independent U.S. Sen. Bernie Sanders' first victory in the 1981 Burlington mayor's race, the Vermont Progressives didn't win major party status in state elections until 2000. That makes the party's accomplishments to date even more significant and the candidacies of Zuckerman and Ashe "important and somewhat inevitable," Pollina said.

"The other parties have had 200 years to build their bases. The Progressive Party has only had 20 years," Pollina said. "So, we've made incredible progress in establishing a party that can not only win issue debates but actually win elections."

Whether candidates bearing the Progressive label can win the state's top offices in 2020 is far from certain. Zuckerman will face former state education secretary Rebecca Holcombe in the Democratic primary, while a number of Democrats have entered or are considering a race for the lieutenant governorship, including Sen. Debbie Ingram (D-Chittenden) and former gubernatorial candidate Brenda Siegel.

In the past, Democratic and Progressive candidates have split the left-of-center vote in statewide general elections. The closest a Progressive-affiliated candidate has come to winning the governorship was in 2008 when Pollina — running as an independent — and Democrat Gaye Symington finished well behind Republican Jim Douglas in a three-way race.

The Progressive Party's only two successful statewide candidates, Zuckerman and state Auditor Doug Hoffer, bore the label of both parties.

In the Statehouse, six of 30 state senators carry the Progressive label, while only 13 of 150 House members do.

Nevertheless, those numbers have been gradually increasing. The recent announcements by Zuckerman and Ashe underscore that more Vermonters are sympathetic to progressive issues, said Terje Anderson, chair of the Vermont Democratic Party.

"The fact that these folks are running does indicate an ascendance and predominance of progressive ideas in Vermont," Anderson said.

The strategic decision by Progressives to run as fusion candidates with the Democratic label reflects the breadth of his party's platform, Anderson said, and has clearly contributed to the success of Progressive candidates.

"Before that, they were running against Democrats and losing, and handing seats to Republicans," Anderson said.

While the "fusion" arrangement can be awkward at times, the Democratic Party views Progressives "as allies and friends" who share a great deal in common ideologically, he said.

Pollina acknowledged that Progressives rely on running as Democrats to win state elections but said the more telling trend is how Democrats have come to rely on Progressive support to succeed.

"It also shows the party is important to winning elections and people want Progressive support, and that's an important indicator of the strength of the party," Pollina said.

The alignment of the two parties has only grown in recent years as the Progressives have helped push Democrats to the left on issues such as health care and the environment, said former governor Howard Dean, who served from 1991 to 2003.

"There's not that much of a divide between Progressives and Democrats anymore," Dean said. "I think all of the Progressives can be very proud of that."

Dean downplayed the notion that the candidacies of Zuckerman and Ashe represent anything approaching a sea change in state politics. Governors can only do so much without the cooperation of the legislature, he noted.

"If they win, the path of the state is not going to be turned upside down," Dean said. "We're not going to have a Canadian-style single-payer [health care system] in Vermont in the visible future." Their victories could nevertheless accelerate progress toward long-held progressive goals of improving health care access, he said.

Not everyone agrees that the two parties are indistinguishable or that Progressives owe their success to strategic cooperation with Democrats.

Bill Lofy, a political consultant who was chief of staff for former Democratic governor Peter Shumlin, attributed the rise in Progressive candidates not just to the appeal of their ideas but to what he called "a bit of a vacuum" in Democratic Party leadership.

He cited last year's impasse on minimum wage and paid family leave in the Democratic-controlled legislature as evidence of divisions in the party that have sapped its effectiveness.

"The Democrats have not done a particularly effective job of driving home a coherent, resonant message with Vermonters," Lofy said.

That was made plain last week, Lofy said, when Zuckerman gave what Lofy considered "the clearest and most compelling articulation of the case against the governor's State of the State."

"The climate crisis has woken up thousands in Vermont and millions across the country," Zuckerman told Seven Days. "We should respond with the resources and the urgency that more and more people are feeling."

Zuckerman's success in two statewide races could help him give Scott the kind of challenge the Republican governor hasn't faced since he was first elected in 2016, said Sen. Chris Pearson (P/D-Chittenden).

In his 2018 reelection as lieutenant governor, Zuckerman received nearly 7,300 more votes than Scott collected in the gubernatorial contest as he held off a challenge from Democrat Christine Hallquist.

"He's one of the few in Vermont who can give the governor a real run for his money," Pearson said of Zuckerman. "We don't oust incumbent governors very often, but I think Dave puts that prospect on the table."

But first Zuckerman will face Holcombe, who on Monday released a list of endorsements from 15 legislators and political leaders, including former leaders of the Vermont Democratic Party.

"The fact that so many have voiced their support for Rebecca's candidacy, and her capacity to bring leadership and a can-do attitude to the Governor's office, at this stage in the race shows the strength of her candidacy," her campaign manager, Cameron Russell, wrote in a statement.

Ashe sees the timing of his and Zuckerman's plans to advance as "coincidental," a result of their individual wishes to move up after serving years in their current jobs.

Ashe, who once worked as a Sanders staffer back when Sanders was in the U.S. House, said there was "no direct connection" between his decision to seek higher office and Sanders' run for the Democratic presidential nomination. But he does share a "kindred connection" with the state's junior U.S. senator, Ashe said.

"My general approach is always to view large, powerful institutions with a bit of skepticism and want to hold them accountable to serve people, not the other way around," Ashe said.

Zuckerman, too, cited Sanders' role in his own political career. He said Sanders helped him overcome his cynicism about the influence of corporate money in politics and inspired him to first run for office in 1994.

In some ways, Progressive politicians in Vermont have been able to "piggyback" on Sanders, getting a boost from his popularity and national stature, Pearson said.

But the momentum of progressive politicians in Vermont is less a function of the influence of the Progressive Party, Pearson said, than of the fact that the "economic realities have gotten harder and harder to ignore."

There is a growing recognition by voters that addressing income inequality, criminal justice reform, access to health care and protection of the environment are issues they cannot allow their leaders to ignore any longer, Pearson said.

He added: "The times have sort of caught up with the message, in a way."