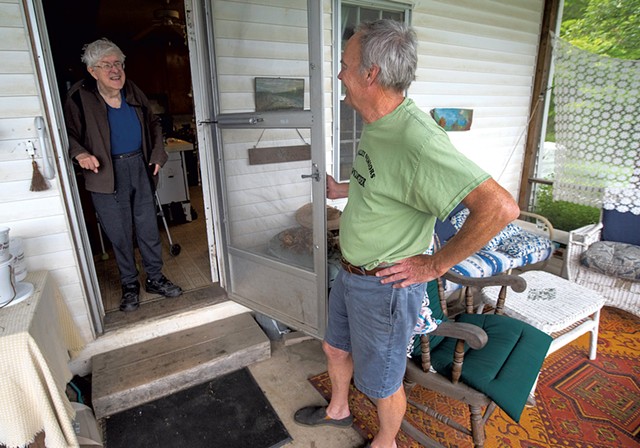 Fred Wilber has to navigate several narrow dirt roads in East Montpelier when he starts his Meals on Wheels route. In winter, they're slick with ice; during mud season, they're muddy and bumpy. He makes the trip each Monday, Wednesday and Friday, rain or shine.

Wilber took a reporter along last week, stopping first at a beautiful old white house with sweeping views of a bucolic landscape. Out front, the garden was overgrown. Wilber knocked on the door.

"Hello!" Kris Christiansen called from inside. The 75-year-old man's eyes lit up, and he smiled as he came to the door.

The men made small talk as Wilber handed Christiansen a cardboard container of pork, potatoes and veggies, plus a frozen meal for later. Wilber asked Christiansen whether he would come to a local senior center for in-person meals, which are finally being served again after a pandemic-induced hiatus.

"Fair enough," replied Wilber. But he encouraged Christiansen to spend some time outside and maybe even venture to the senior center if he felt up to it. Christiansen waved goodbye from the doorway: "See you on Monday!" he called out.

Christiansen is among some 8,699 older Vermonters who received 1.1 million meal deliveries in 2021, according to the state Department of Disabilities, Aging and Independent Living. The effort is coordinated through Meals on Wheels, a program that's grown in demand markedly in recent years due to an aging Vermont population, the pandemic and inflation. The small army of volunteers that delivers food has been dwindling, though, because many of them are older people themselves who are still worried about COVID-19. That's especially concerning since many of their clients are more isolated and vulnerable than ever, relying on the volunteers not only for nutrition but also for critical check-ins.

"We've gone from having volunteers at our fingertips to now just struggling to find the volunteers," said Nicole Fournier Grisgraber, executive director for Meals on Wheels of Lamoille County.

A delivery volunteer can be the only person some seniors see all week. Earlier this month, a driver delivering food in Poultney found an elderly woman lying in her yard. She'd fallen a few hours earlier. Unable to get up, she had been yelling for help, said Carrie LaFond-Hurlburt, director of the Young at Heart Senior Center in Poultney. Gene Troia, executive director of the Twin Valley Senior Center in East Montpelier, said he deals with similar emergencies each month.

"This is what makes our community as strong and special as it is. and we all have to work to make it that way." Fred Wilber tweet this

The Northeast Kingdom, too, poses challenges, because drivers have to travel significant distances, said Angela Smith-Dieng, director of the Adult Services Division within DAIL. "If people are socially isolated," Smith-Dieng said, "as they very much were during the pandemic, then that can lead to significant negative health impacts."

Those who receive the service say it allows them to age in place, giving them a continued sense of independence and vitality. More than 90 percent of older Vermonters surveyed by the State Unit on Aging reported wanting to live at home for as long as possible.

Wilber, who has a contagious smile and an easy demeanor, is the former owner of Buch Spieler Records in Montpelier. After selling the store in 2015, Wilber found himself with an uncomfortable amount of time on his hands. His wife suggested he get out of the house and volunteer at the Twin Valley Senior Center; he's now on its board.

The center delivers 167 meals a week to seniors in a rural section of the state. While it once boasted 42 volunteer drivers, it has just 20 today. If it can't staff the routes, then the seniors who benefit could potentially go hungry. That keeps Wilber up at night.

In 2021, people over age 62 made up 27 percent of Vermont's total population, making it the third-oldest state in the nation. Studies have shown that to maintain both physical and mental health, seniors need social interaction.

Many of the volunteers who've provided that stopped helping during the pandemic and simply haven't resumed, still worried about their personal exposure. Others have moved to warmer climes or have been discouraged by soaring gasoline prices. While many Meals on Wheels programs reimburse volunteers for mileage, a number cannot afford it.

Exacerbating the problem is the huge increase in need since the start of the pandemic. COVID-19 forced centers to close for months and caused many seniors who previously dined in person to switch to home meal delivery.

More recently, inflation and other economic strains have only added pressure on providers, said Deanna Jones, executive director of the Thompson Center in Woodstock. In 2012, her center delivered 5,800 meals, she said. That number soared to more than 18,000 in 2021. More seniors are now requesting supplemental groceries on top of their meals, Jones added.

Some Meals on Wheels programs have been stretched to their limits. The Lamoille County program at one point had more than 75 volunteers; it's down to 55. The program needs a minimum of 45 volunteers a week. 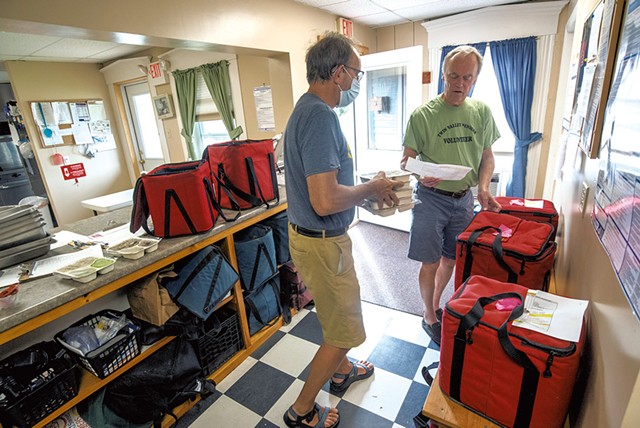 The Twin Valley Senior Center has asked board members to learn delivery routes in the event they have to step in. LaFond-Hurlburt of the Poultney center said she's had to ask volunteers to add more stops to their routes, meaning some now take hours to complete. "We can't cut back on the services we offer, because every single one of them is really needed," she said.

"It's not like if you're missing staff in a restaurant or a store and you just limit your hours or have to not serve as many people," Smith-Dieng said. "Instead, it means that people go without the care they need to be able to live at home."

Delivering food to rural areas can pose a huge challenge. Wilber said some of the volunteers for the Twin Valley Senior Center quit after last mud season; it was simply too treacherous to reach certain houses.

The volunteers brighten their clients' days. One senior served by the Woodstock center told volunteers that they're the only reason she gets up and puts on makeup every day. Wilber said he often has to pull himself away from conversations to make sure he finishes his route.

"They want to talk," he said. "They're starved for conversation."

When Janice Prindle became the primary caregiver for her dying friend during the pandemic, Meals on Wheels delivered more than just food. "Volunteers did our shopping, made sure we had whatever we needed," Prindle said. "After a long day at the hospital, I came home to a dinner waiting for me in my fridge."

To stay afloat, senior centers and Meals on Wheels hubs are having to get creative with their volunteer recruitment.

Grisgraber has even partnered with a classic car club to coordinate a special day of meal deliveries in vintage autos. "We're just trying to think of ways to get people's attention," she said.

Wilber uses Front Porch Forum to tout the benefits of volunteering, though he's gotten no replies. He writes the same headline for each of his posts: "A Senior Center for All Ages." Wilber thinks he's gotten just as much out of donating his time as the seniors he serves.

"I think it's important for the fabric of the community," he said.

Back on his route, Wilber stopped at the home of Elaine and Stanley Fitch in Calais, a favorite stop on his route of 10 households. He's gotten to know the couple during his five-plus years volunteering.

Their daughter, Diane, came to the door. She and two sisters help care for their parents, who, on this Wednesday, were getting checked out by a nurse. Wilber dropped off the lunches, then chatted with the Fitches before heading back to his car to continue his route.

"Their relationship with Fred is one of the most important relationships in their lives," Diane said. "It's not just bringing meals. It's like a friend that's coming to visit."

Next, Wilber dropped off a meal for a man who talked up a storm and practically begged Wilber to stay longer. At another stop, a woman whispered to a reporter that Wilber sometimes sneaks her a cookie with her meal.

Toward the end of his route, Wilber stopped at a woman's house in Calais. The 83-year-old woman invited Wilber onto her porch, which looks out on Curtis Pond. "It's a wonderful alternative to be able to age here," she said, staring out at the water. Her 18-year-old dog nuzzled her hand. "I can't remember the last time I could go to the store," she said as she gratefully accepted her meal from Wilber.

Back in his car, Wilber said he's worried about filling routes in the winter, when volunteer numbers decline. "I'm not trying to guilt people," Wilber clarified as he made his way back to the senior center. "But this is what makes our community as strong and special as it is. And we all have to work to make it that way."

Rachel Hellman covers Vermont's small towns. She is a corps member of Report for America, a national service program that places journalists in local newsrooms. Find out more at reportforamerica.org.