Producer Extraordinaire Willverine Is On a Mission to Collaborate 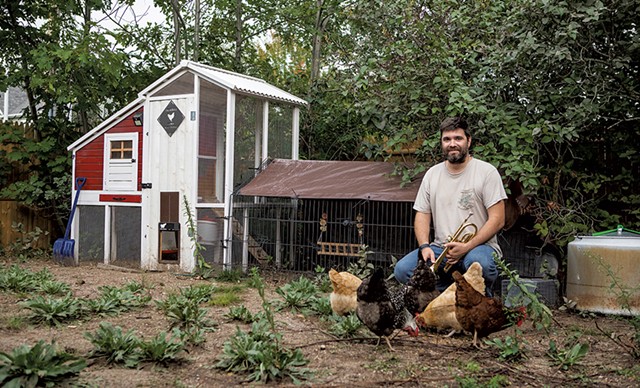 Will Andrews is a prolific creator of new music. The 36-year-old songwriter and producer, also known as Willverine, has been working on a new solo album, a five-song EP called Goodnow, for more than a year. He released four songs toward the end of 2020 and will soon add a single. So, though the record remains officially unreleased, it's already out in the world.

I mentioned this to the Colchester-based artist as we spent a late summer afternoon talking about music and life and wondering when an album is really an album.

"I ... didn't really have a good rollout strategy," Andrews conceded with an easy smile and a shrug, lounging in a chair with his long legs stretched out. "I didn't really know what to do, so I just released the album as singles, which I thought was a good idea. Turns out, not so much. I don't worry about those sorts of things, though. It's about the music, and I'm just right into the next project."

"I want to be the Damon Albarn of Vermont." Will Andrews tweet this

That spirit defines Andrews' approach to his work and has helped make him one of the go-to producers on the current local scene. He's on a mission to collaborate and create with as wide an array of musicians as possible — while becoming the kind of artist he's always dreamed of being.

"I want to be the Damon Albarn of Vermont," Andrews proclaimed. "What he does with [the band] Gorillaz, that's what I want to ideally do here, and just work with everyone I can. That's not how I started, but it's where I'm going."

"All I wanted when I was 22 was to go to the bar, play shows and chase girls," Andrews said. "It's not very sustainable, though — driving to Ithaca to make 60 bucks a show? Never again, man. That life gets pretty empty when you get older, anyway."

Realizing he hated doing the "trumpet player for hire thing," Andrews focused on his own studio. In 2013, he released his first record as Willverine: I'll Come Through. Three years later he released Show Up Late, a seven-song collection of bedroom electro-pop showcasing the budding producer's melodic sensibilities and knack for creating inventive beats.

Willverine's Save Some (2018) was a stronger and more sophisticated beast than Show Up Late. Featuring vocals from indie-pop singer Francesca Blanchard and formerly Burlington-based Maryse Smith, the record showcased Andrews' musical development. His arrangements were more refined, his songwriting sounded more assured, and his production reached a new level of proficiency. Andrews had found his sound.

"I finally figured out what I was good at," Andrews said with a laugh and a rueful shake of his head. "That Malcolm Gladwell 10,000-hours thing is real, man. You have to put in the work. That's what changed for me. There wasn't some big, shining moment. I realized that if I wanted to get good at being a producer, I had to put the time in."

Unfortunately, Andrews doesn't have an abundance of time. In addition to raising two young boys, he has taught in the Winooski School District since 2006. He currently runs the independent study program at Winooski High School.

"It's such a small school that we don't have a photography class or an astronomy class," Andrews said. "So the kids will come in and tell me what sort of subject they want to study, and I'll coordinate that for them. It's a creative gig, which I dig."

With time at a premium, Andrews created a rigorous schedule. After work, he'd drink a post-dinner coffee and stay up until 3 a.m. writing music. In other circumstances, that schedule might have worn him down, he said, but as he honed his craft, the creative work fueled him.

He became obsessed with songwriters such as Lucy Dacus and Phoebe Bridgers. Andrews writes music in various ways, sometimes starting with a beat, sometimes on the synth or his trumpet. Listening to those songwriters taught him to write from a melody, something he said he's still getting used to.

His influences also inspired him to reach out to other musicians, not just as guest collaborators on his tracks but also as cowriters.

"I've always written music by myself," Andrews said. "But then Sam Dupont wanted to write a song together. He saw what I could do with production now — how I could create a vibe — and he was like, 'OK. Let's do this thing.'"

Dupont, who performs as Blackmer and used to be half of the Dupont Brothers, had already sung on the Willverine track "All Your Friends Are Gone." In that chilled-out slice of electro-pop, both artists are at their best: Andrews' deft, colorful production forms the bedrock for Dupont's soulful vocals.

"I love that tune," Dupont told me by phone. "It's Will's tune, and I just got to sing on it. It was easy, just being the singer boy."

Andrews, who played with Dupont's older brother Zack in Japhy Ryder, said the immediate chemistry he and Dupont had as songwriters shocked him. Andrews created and programmed the beats beforehand, and Dupont free-styled words and melodies. By the time they were done writing and recording the songs, the two had found that they had an entire LP ready to go. Andrews already regards the still-untitled album, which comes out this fall, as the best piece of music he's helped create to date.

"Sam was going through some stuff this last year that I didn't really know about at the time," Andrews confided. "He was just coming over and writing and recording and going through these cathartic moments. When I listened back to the tracks after a few months and listened to the lyrics, I couldn't believe I had missed it!"

"It was definitely a tough year for me," Dupont said. "It's a breakup record for sure, but it's also about getting older and finding your true self. Will is such an important person in my life. It just felt natural and safe to express that with him. I'm a sensitive-ass dude. Having someone just building you up with positive energy is huge. He's a teacher and a dad, so Will is really good at making people feel comfortable."

I asked Andrews whether his other roles factor into his popularity as a producer. He shifted in his seat and said many motives drive him, some nobler than others.

"I love working with all these incredible musicians," he said. "It's affirming, especially because it took me time to get here. But I do hold grudges, I have to admit. As a trumpet player, the most judgmental people in the world are jazz musicians. There is a long list of people in this town who have been complete assholes to me about my playing, because it doesn't fit what they think the instrument should do."

Comparing his trumpet playing to that of Snoop Dogg rather than Miles Davis, Andrews explained that his percussive style rubs some jazz purists the wrong way.

"Honestly, those sort of people drive me, too," he said. "I keep those chips on my shoulder, just a little bit. It's like an athlete sort of thing. You going to talk shit? OK, I'll show you. I don't focus on it too much, but it's in there, no doubt."

Regardless of his motives, Andrews' approach is working. In addition to preparing to release Goodnow and the record with Dupont, he has an instrumental album all but ready to go. He's also producing tracks with Blanchard and Latin folk singer-songwriter Marcie Hernandez. At a recent gig he played, Andrews met indie soul singer Ivamae, with whom he hopes to record soon.

"I used to think you needed to do all these things to be successful," Andrews said: "touring, getting on compilations, schmoozing and networking."

As we ended our conversation, he stood up and took a deep breath.

"If this is where I am for the rest of my life," he said, "if I can make music all the time and have all these talented people who want to work with me in my circle, I'll be as happy as a pig in shit. And you know what? If 22-year-old Will heard the music I'm making now, he would be so psyched."

Willverine performs every Wednesday in September, 7-9 p.m., at the Wallflower Collective in Burlington. Learn more at soundcloud.com/willverinemusic.