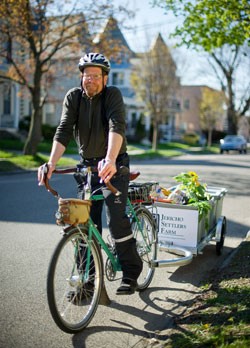 In Burlington, we have none of these. But that hasn’t stopped Mark Bromley from pushing ahead with One Revolution, a bicycle-based pickup and delivery service. Starting in June, Bromley, a 55-year-old architect, and his four-person crew will be pedaling produce around for local farms and shuttling baked goods for area bakeries.

Burlington is no stranger to intrepid bike-trepreneurs with designs for pedal-powered businesses. But two things typically scuttle their efforts: hills and weather. Bromley isn’t worried about either. In addition to Portland, he says, several cities with challenging terrain or dodgy climate have been able to sustain bike delivery businesses, including Chicago, Boston and Northampton, Mass.

Before they wrote a business plan for One Revolution or invested in specialized bikes, Bromley and his two children, Sam, 23, and Anna, 21, took research trips to cities with successful bike delivery companies. Over the winter, he approached local businesses about his idea. “The response has been really encouraging,” Bromley says.

Soon the crew will start delivering CSA shares for Jericho Settlers’ Farm and breakfast and lunch items for On the Rise Bakery in Richmond. Bromley is working out a partnership with the Intervale Food Hub, which currently delivers 300-plus farm shares by van to 25 corporate clients such as Fletcher Allen Health Care, Dealer.com, Champlain College and JDK Design.

A number of other establishments have expressed interest in One Revolution’s services but have yet to sign formal contracts, Bromley says. Entrusting part of their business to an untested entity such as One Revolution is hard. “Part of the battle is, it’s a different thing,” Bromley says.

The idea of a bicycle delivery service with regularly scheduled pickups and drop-offs has been percolating in Bromley’s mind for years. The Cabot man is an enthusiastic proponent of bike touring — he and Anna rode across the country on recumbent bikes four years ago — and has always been intrigued by two-wheeled enterprises.

Once Bromley did his research and determined the business’ viability, there was the matter of getting the bikes. The One Revolution fleet is composed of two handmade cargo bikes and two regular bikes towing custom flatbed trailers.

One cargo bike is a Metrofiets, inspired by the Dutch and Danish hauling rigs and hand built in Portland. The space between the handlebars and the front wheel fits either a large box or a pallet, depending on what needs moving. The bike will haul 500 pounds and features an electric-assist motor to help with the hills.

The other cargo bike, from Philadelphia frame builder Bilenky Cycle Works, has a small front wheel with a large basket perched on top. All of Bromley’s bicycles will be outfitted with signs listing his clients — advertising that he hopes will help attract more businesses.

Another draw: Bromley contends that bikes can often move across the city faster than cars can, even when loaded with hundreds of pounds of cargo. Plus, he reasons, bike delivery contributes to a healthier environment, albeit in a minor way. “I hope that we’re doing something — one super small revolution — in developing a better way of moving stuff about that will be of benefit to us and our community,” he says.

Ben Bush, co-owner of On the Rise Bakery, sees the partnership with One Revolution in pragmatic terms. “It’s another way for us to get our baked goods out,” he says.

Specifically, Bush says he expects to use One Revolution to help the bakery respond to special orders: Customers can place orders online for birthday cakes or sandwiches for a lunch meeting, and Bromley’s crew will deliver them the next day. Since On the Rise already has a number of wholesale accounts in Burlington, the bakery’s drivers will drop off the special order at One Revolution’s Old North End dispatch office and go about their deliveries.

Despite its Richmond location, On the Rise has slowly been making inroads into the Queen City market. One Revolution offers another way for the business to “connect to that crowd,” Bush says.

The Intervale Food Hub has not yet signed a formal contract with One Revolution but is keen to distribute its farm shares in a more environmentally conscious way, says Sona Desai, who manages the program.

But she has concerns about the quality of produce after it’s spent a few hours on a cargo bike. So Desai and Bromley are developing an enclosure system with enough ventilation to prevent wilting during the delivery process. The enclosure will also have to be sturdy enough to keep fruits and vegetables from bouncing around. Desai says that for her clients, most of whom are new to the CSA model, the look of the produce is paramount; bruised fruit won’t cut it. “Service is so key there,” she says. “They’re expecting something that looks like it came from Shaw’s.”

After crunching the numbers, Desai worked out that it might cost the Intervale slightly more to hire One Revolution than the program currently spends on deliveries. (Because they don’t have a formal agreement, Desai declines to reveal a figure.) But the benefits — marketing and advertising, sustainability and supporting a community endeavor — would be worth the increased cost, she says.

Bromley expects the possibilities of his service to extend beyond hauling food. Anything subject to regular pickup or delivery — diapers, bulk pet food, recycling — can be toted by bike.

He acknowledges the risk of signing on with a new, unproven business like One Revolution. But Bromley’s passion for bicycle commerce is so strong that he’s quitting his full-time job at Birdseye Building Company to get One Revolution off the ground. He admits that “no one is going to get rich” from bicycle delivery, so he’ll still do some part-time architecture work on the side.

More than just being passionate about the concept, Bromley is convinced the enterprise will be a boon to area businesses. “The advantage is being associated with a better way to move things around,” he suggests. “It would be presumptuous to say so, but it seems like a very good corporate image.”