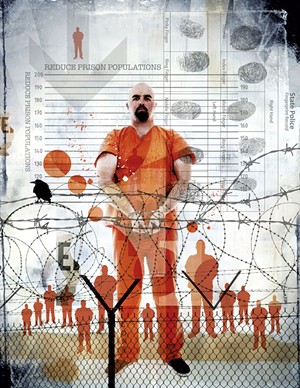 As an artist with no legal background, State Rep. Mollie Burke (P/D-Brattleboro) seems an unlikely candidate to spearhead criminal-justice reform. But after attending a conference that addressed female inmates and their struggles, she grew concerned about the number of prisoners incarcerated in Vermont.

Burke is now the lead sponsor of one of the most ambitious criminal-justice reform bills to hit the legislature in recent years. H.221 aims to drastically reduce Vermont's inmate population and eliminate the need to send prisoners to private out-of-state prisons.

Lawmakers, members of the legal community and even Department of Corrections officials have agreed that's it's an admirable goal. Vermonters for Criminal Justice Reform — a grassroots organization dedicated to that cause — crafted H.221. Eight House members, including Burlington Democrats Jean O'Sullivan, Jill Krowinski and Joey Donovan, signed on last week. Even its detractors concede that the bill would do more to reduce the inmate population than any law recently proposed.

Sent to the House Committee on Corrections and Institutions, H.221 has three key proposals to cut the overall prison population. First, the bill would eliminate prison sentences for most nonviolent crimes. Instead, defendants would face probation and participate in community-based programs. Second, it would eliminate the DOC's ability to send people on probation or parole back to prison for relatively minor offenses, such as failing to meet with probation officers or missing a counseling appointment.

Lastly, it removes the DOC's power to approve or disapprove of an inmate's proposed housing plan after release. More than 240 inmates currently remain incarcerated past their minimum sentence dates because the DOC has vetoed their post-prison housing arrangements.

Supporters say that those proposals, along with other initiatives in the bill, would likely reduce the prison population by several hundred inmates — a drop that would eliminate the need to send inmates out of Vermont. They say shipping inmates out of state fractures critical bonds between prisoners and their support networks, therefore increasing the chances of recidivism.

"We want to keep people out of jail. We want to keep prison for people who need to be there," said former state lawmaker Suzi Wizowaty, director of VCJR. "We are so used to the idea of incarceration in this country that we have forgotten that locking someone in a cage is a terrible thing to do," Wizowaty said. "Depriving someone of their liberty ... has a lot of repercussions. When we put someone in jail, it doesn't make it any better."

"Suzi has a different vision for the criminal justice system, and it's a vision that we should certainly talk about," said Robert Sand, a former Windsor County state's attorney and current adviser to Gov. Peter Shumlin. "Whether we're ready as a state for the full extent of that vision, I suppose the legislative process will show that."

But the bill has virtually no chance of passing this legislative session, or even coming to a vote. The 44-page bill's proposed reforms are too radical and politically unpalatable, officials say.

State Rep. Alice Emmons (D-Windsor), chair of the House Committee on Corrections and Institutions, said H.221 will receive a hearing in coming weeks. But any further activity will have to wait until next year at the earliest, Emmons said.

Meanwhile, DOC officials struggling with inmate overflow are close to finalizing a new contract to continue sending inmates out of state for years to come. The state's two-year, $34 million contract with Corrections Corporation of America expires in July.

As of last week, the state had 1,934 inmates, including 371 held in private prisons in Kentucky and Arizona.

Senate Judiciary Committee chair Dick Sears (D-Bennington) is arguably the most influential lawmaker on criminal matters — and he's skeptical. Sears said he is reluctant to pass bills that would eliminate probation officers' ability to send defendants back to prison.

Besides, the state is already making progress in reducing its number of prisoners, said Sears and DOC commissioner Andy Pallito. The out-of-state prison population held at more than 500 for much of 2014, compared with 371 now.

Pallito said that figure is slated to drop to 341 inmates in coming weeks as prison beds become available in Vermont. Pallito credited recent efforts to expand pretrial programs for drug addicts designed to get them into treatment and to cut recidivism. "That's happening outside this bill," Pallito said. "We're bringing the numbers down. It's going to take time."

But meanwhile, the Shumlin administration has proposed a change that would hamper efforts to further reduce those numbers. To generate money, the administration wants to house more federal inmates in Vermont's prisons. A proposed contract change would up the state's cap of federal inmates from 40 to 60, which could potentially displace Vermont inmates. Pallito conceded that means the out-of-state population may not fall as quickly.

Wizowaty said it would be a mistake. "I'm sympathetic with the financial problems that legislators are faced with, but let's do what's best for the families involved in this particular situation, which is to send fewer people out of state," she said.

Reformers such as Wizowaty insist that Vermont has to support more radical reform if it's ever going to substantially reduce the prison population. Despite recent progress, the inmate population is still dramatically higher than in the past, they say. Vermont had roughly 1,000 inmates — about half its current prison population — in 1995. The population climbed steadily until 2004 and has remained fairly steady ever since.

Meanwhile, crimes committed in the state dropped by more than 30 percent in the same period, according to federal statistics. Tougher sentencing laws, especially for drug crimes, led to the increased inmate population.

Jeremy MacKenzie is a Burlington resident who spent eight years in prison, mostly in Kentucky, on drug-dealing and bank-robbery convictions. He said he knew dozens of inmates who didn't receive treatment — mental health or otherwise — while behind bars, and who likely wouldn't have posed a danger to the public.

"I don't believe a state should be locking up more people than it can contain in its own facilities," MacKenzie said.

"Having your community banish you to a place where nothing gets fulfilled positively in your life, it's not a solution," MacKenzie said. "The more people you cast away in the prison system, the more prisoners that you cast into the abyss, the more it's going to grow." Now 32 years old and attending a Vermont college, MacKenzie said he's fortunate to be rebuilding his life. Many other inmates were positioned to fail after being released, he said.

Though the proposals in H.221 are comprehensive, they don't break new ground. Defense attorneys and critics of the criminal justice system have long pushed for many of the reforms proposed in the bill, Defender General Matthew Valerio said. "It's an attempt to get at issues we have been struggling with for 20 years. I don't see anything new there."

Asked whether he thought the bill's key proposals would ever pass, Valerio said, "I doubt it. There's not usually a lot of political will to take prisoners out." Yet simultaneously, "Elsewhere in the building, we're adding criminal penalties with jail time," Valerio noted. "I've said before: Why don't we take two years off and not pass any crime bills and let things settle? We could still arrest people and prosecute people."

But lawmakers don't seem interested in a moratorium on creating new crimes. Instead, they're busy debating bills that could create even more inmates.

One bill includes a provision that could jail parents, caregivers or even social workers for failing to protect a child. It unanimously passed the Senate Judiciary Committee. Other bills propose to criminalize filing false claims against the state, home improvement fraud and selling shark fins.

Even Burke is cosponsoring a bill that carries potential prison time for people who post intimate images of their partners online without their consent. Meanwhile a bill to legalize the possession of marijuana — a common source of arrests and probation violations — appears to have little chance of passing this year.

While the push to reduce inmates is languishing in the Statehouse, the DOC is making arrangements to continue the out-of-state program for several years. The DOC is considering two finalists' bids for a two-year contract, with an option for two more years, commissioner Pallito said. One of the bidders is CCA, which would continue to house Vermont inmates in Kentucky and Arizona. The other is the GEO Group, which proposes sending Vermonters to its prison in Michigan.

Pallito said that while his deputies are still reviewing the proposals and grading them in several categories, the bids are close. He expects to make an announcement in early March.

Burke and Wizowaty concede that there isn't political will in Montpelier to pass a law like H.221 that would so sharply reduce criminals' exposure to prison time. They are more likely to see smaller "pieces" of their proposal passed, they said.

"You're never going to get everything you want," Burke said during an interview in the Statehouse cafeteria, where several of her vibrant paintings were on display. "[But] you don't want to be afraid of putting something like this out."