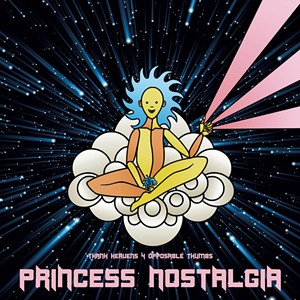 Memo to rappers and producers of the world: Do not ask Princess Nostalgia whether she wants to sing on your track. I'll save you the trouble. The pop/R&B singer-songwriter/producer is not interested. But budding beatsmiths and rhyme slingers shouldn't take it personally. It's not that the Italian-born, Pittsburgh/Burlington-based University of Vermont student thinks you suck, necessarily. It's just that she's solely focused on crafting her own work, the bedrocks of which are her muscular instrumentals and beats.

That's not to say that the artist, real name Lilian Traviato, is dismissive of herself as a vocalist and lyricist. But those facets, ones that would likely pigeonhole her if she weren't such a staunch self-advocate, are only part of the show.

Princess Nostalgia's debut album, Thank Heavens 4 Opposable Thumbs, is nothing short of a revelation. Low, deep tones often take center stage in her luscious pop compositions, which makes sense given that Traviato's first instrument was the double bass. She layers her songs with chunky synths and other midi sounds, all pumping and circulating around her effects-heavy vocals and often-enigmatic lyrics.

"No Guru," the first of the album's eight tracks, begins with Champagne-bubble synths and rounded bass notes that gurgle under Traviato's motto: "I will never need a guru."

The wiry bass notes and demonic laughter that open "Gestalt Switch" conjure images of a haunted cathedral. The song eventually breaks down into layered gothic harmonies, like something out of the sexiest church service ever.

A murky din of protesters (or are they voices emanating from hell?) introduces Traviato's most overtly political tune, "Podium Playground." Condemning the ouroboros of capitalism and politics on the jaunty banger, she cleverly uses "we" and "I" pronouns instead of "they" ("I like 'em incarcerated, undereducated / So I can have more money for me, me, me"). She indicates that we're all complicit while simultaneously inciting a dance party.

"Ode to Boy," a near-folk-rock tune originally released in 2018 during the peak of the #MeToo movement, empathizes with men and boys rather than condemns them. "No wonder you're so sick," she sings, indicting the system that instills toxic masculinity rather than the individual. Joe Leytrick, the only outside collaborator heard here, lays down a smooth acoustic riff throughout.

The serpentine "The Talking Drug" is a slinky slow-jam that seems to fetishize and scrutinize the art of conversation. At her most melismatic, Traviato stretches out the word "sincerely" into 10 syllables, molding it to fit her grand design. She closes with "Love Me Long Time," a self-love anthem that sounds like it emanates from a crystalline music box.

As Princess Nostalgia, Traviato consistently defies convention while simultaneously bringing together familiar elements of pop R&B from the last four decades. I can't wait to see what she does next.

Thank Heavens 4 Opposable Thumbs will be available on Friday, December 13, on all major streaming platforms.