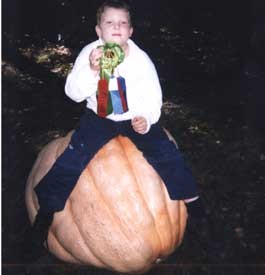 The “Peanuts” gang might have been more inclined to believe in “Great Pump-kin,” if Linus could have produced a picture of a thousand-pounder. While no Vermonter has yet grown one that big — that we know of — it appears to be just a matter of time before some dedicated horticulturalist weighs in. And chances are, he or she will be a member of the Vermont Giant Vegetable Growers Association.

Last year at the Barre Farm Show, a group of exhibitors with voluminous veggies decided to organize — call it a league for sport gardeners. With the help of a small grant from the Ver-mont Department of Agricul-ture, they elected officers, started publishing a quarterly newsletter, and began to provide tips and techniques for growing the big ones.

Ron Scholtz, 37, is both secretary and treasurer of the VGVGA. His day job as a chef at Norwich University affords him access to massive amounts of kitchen trimmings for his home compost pile in Williams- town. Scholtz has made growing giant pumpkins a family affair. His wife Lynda ensures that the hungry veggies get fed and watered while he’s at work; his 7-year-old son John took first place in the junior division at the Tunbridge World Fair last year.

Scholtz got hooked on competitive gardening three years ago when his pumpkin tipped the scales at 190 pounds. The following year he bested that with a 368-pounder. Last year’s was 663. His relatively modest goal this year? A 700-pound specimen.

The hefty hobby of giant pumpkin growing has a long history. At the 1900 World’s Fair in St. Louis, a certain William Warnoch set a new world record at 400 pounds, up from his 365-pounder in 1893.

Fast-forward to the late ’70s: A guy from Nova Scotia named Howard Dill was experimenting with a pumpkin-squash hybrid. He came very close to the 500-pound mark, and held the world record in 1980 and ’81. Shifting gears from competition to propagation, he became a one-man industry, selling the trademarked seeds that now bear his name — Dill’s Atlantic Giant.

Dill’s Web site touts “Premium” and regular seed lists, as well as merch like hats, T-shirts and postcards. Another must-have item for the heavy hitters: “the exact same tarp used to lift and carry many of today’s record-size pumpkins.” If you want to get started in the colossal cucurbit business, Dill’s Atlantic Giant is the place to begin.

Why focus on pumpkins? Mostly because no other vegetable can reach such impressive weights. Some VGVGA members do grow other biggies, including watermelons, tomatoes and potatoes. But while a world-record 53-pound rutabaga or a 62-pound kohlrabi may turn a few heads, giant pumpkins are the undisputable kings of competition.

Just how big do they get? For years, the 1000-pound level was considered the Holy Grail of gardeners. In 1996, Nathan and Paula Zehr of Lowville, New York, raised the bar with a pumpkin weighing 1061 pounds, for which they won a prize of $50,000 from — no joke — the World Pumpkin Federation. The victory also made them the first proud members of Club 1000, something like a Mensa of pumpkin growers. There have been 36 half-ton pumpkins since.

The 1100-pound level was reached in 1999. Last fall, Brittany and Craig Weir of Salisbury, Massachusetts, claimed the new world record of 1260.4 pounds. Imagine their dismay when it was topped one week later by a pumpkin grown by Geneva Emmons of Sam-mamish, Washington — still the world record at 1262 pounds. That’s a good amount of gourd.

Most growers now believe that 1500 pounds is possible; in fact, the World Pumpkin Federation has got another 50 grand for the first grower to prove it. And the race is on. Can Vermont gardeners, with their relatively short growing season, even dream of competing? The state’s current record-holder is Mark Breznick of Pittsfield, who cultivated an 828.8-pound monster in 2000.

One of the pur-poses of the 22-member Vermont Giant Vegetable Growers Association is to nurture potential record-beaters. If northerners from Massachusetts or New York or Canada can produce winners, they believe, why not the Green Mountain State?

Toward that end, Ron Scholtz shares some trade secrets — no, not genetic engineering — for producing a giant pumpkin that even Linus wouldn’t believe:

Seeds: Dill’s Premium Seed List reads like a pedigreed thoroughbred order sheet — just one seed from B. Hebb’s 2001 1069-pounder will set you back $6. You have the guarantee, however, that the female parent was the 875-pound Dill ’99, and the father’s pollen came from Hebb’s own 990-pound big guy grown in 2000. Or perhaps you prefer a seed from the 1061-pound ’01 “J. Pukos,” whose male and female flowers came from the same 805-pound 1999 selection. One seed of this choice specimen is offered for $8.

If these prices seem too steep, you can obtain a packet of seven seeds from 350- to 500-pound pumpkins for $3.50. Many growers even give away seeds from their own winners — just cozy up to them at the next state fair.

Dirt: Nothing is too good for these big babies. Scholtz doesn’t even use soil. He prefers a deep bed of leaves, cow manure and those buckets of kitchen scraps. Some growers’ Web sites list recommendations as to the truckloads or tons of nutrient-rich material you could add to your pumpkin patch.

Planting: Given Vermont’s climate, some extra measures are necessary. Scholtz starts his seeds indoors by April 15th and has them in the ground by May 1st. Because the ground is not warm enough, he uses an underground electric soil-heating cable until June 1st.

Selection: The runts are shown no mercy. Scholtz keeps only his four most vigorous plants, and each is allowed to develop only one pumpkin.

Fertilization: While some large vegetables are grown organically — like Ted Sargent’s 48-pound watermelon grown last year in Huntington — most giant-pumpkin growers do not hesitate to bring out the big guns of chemical fertilization. Scholtz uses blood meal and 15-30-15 to start, later switching to sidedressing with 20-20-20. Foliar feeding is also popular, where a fish emulsion and kelp solution is sprayed on the leaves.

Watering: Scholtz reports his four plants use a whopping 90 gallons of water a day — not a welcome prospect in a dry summer. This requirement might rule out city gardeners who, lacking their own wells, have to actually pay for their H20.

Other considerations include recognizing the difference between male and female flowers; pollination, which is usually done by hand; providing shade to keep the big guy from “cooking” in the field; avoiding “stem stress,” from which the stem may snap off from the pumpkin; and mounding the soil so that additional roots can grow from the stem.

When harvest time comes in September, a forklift or front-end loader is brought in, and the beast is gingerly lifted onto a truck for a trip to the feed store or the fair — the Tunbridge World’s Fair is a popular one. A pumpkin that makes adults stare in wonderment is rewarding, but it’s the delight of children that really makes it all worthwhile, as far as Scholtz is concerned. Next thing you know, the kids want some Dill’s Atlantic Giant seeds and are begging to start their own gardens.

In the end, most giant pumpkins return their massive bodies to the compost pile to nourish the next generation. Some growers think more creatively, however. Wayne Hackney of New Milford, Connecticut, put his whopper to a nautical use back in 1996. He carved out the center of his pumpkin and attached a 2-horsepower outboard motor. The “Mighty Mabel” crossed a two-mile-wide lake at a speed of 2 miles an hour.

While the Vermont Giant Vegetable Growers Association has no plans for a pumpkin armada, it is carefully tending the 2002 competitors. Ron Scholtz and his merry band of growers will definitely be thinking big.