Summer visits to my mom's place inevitably include afternoon wanders through her three-acre property to survey the day's blooms. Her gardens began with two modest plantings in the 1980s and have expanded into a wild collection of hard-to-find perennials.

In recent years, I've noticed more native plants creeping in — lovely, early-flowering varieties that evolved in local forests and are well adapted to Vermont's rock-studded, glacial-till soil. These plants are noninvasive, and, since they tend to thrive with minimal maintenance, they're ideal for backyard gardeners who like to keep a pretty spread without devoting tons of time to it. What's more, many Vermont nurseries carry them in abundance.

Reached by phone, Perennial Pleasures Nursery owner Rachel Kane says native plants offer bigger-picture benefits. "A great reason to use them," she explains, "is that they've co-evolved with the insects and wildlife here, so they support native populations of pollinators to a larger degree than cultivars."

Kane's East Hardwick nursery offers an array of native plants, many of them bedded in gorgeous display gardens that awe and inspire.

In Morrisville, Cady's Falls Nursery specializes in shade-loving plants and offers abundant, walkable gardens. Co-owner Leela Avery says most shade-seeking natives are perfectly happy in any well-drained, organic, humus-rich soil, but cautions that many come from deciduous forests, so they'll do better below hardwoods than conifers.

Because they come from broad-leaf forests, many of these dainty flora bloom in the light of early spring, before the leaves grow in. In the garden, they give you a flash of color, heralding warmer days before fading to green for the season. But the leaves are often just as lovely as the blooms.

"These woodland plants are just wonderful," Avery says. "It's a wonderful garden to have, especially in summer."

Here are seven sweet, easy-to-grow favorites that would be just as happy in an urban backyard as in my mother's sprawling gardens. 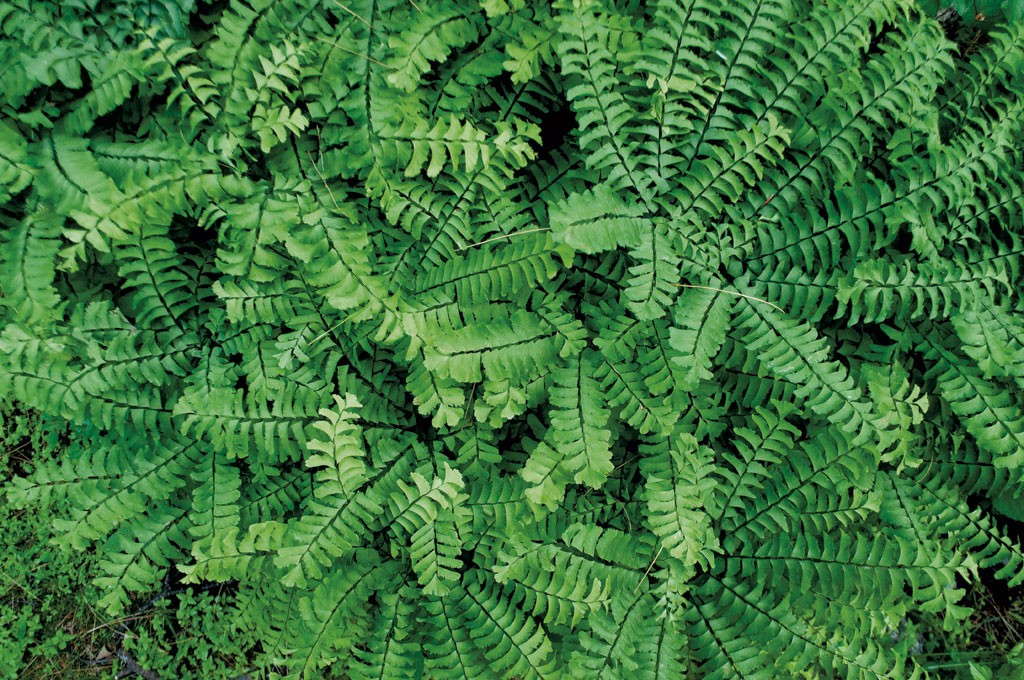 This slow-growing, lacy fern will sprawl into a dense clump no more than two feet high. Plant it in moist, well-drained soil with lots of organic matter (think leaf-littered forest floor) under trees, in rock gardens or as a border. Avery calls it an "unfussy" perennial and notes that it prefers limey soil. Foliage only, full to partial shade. 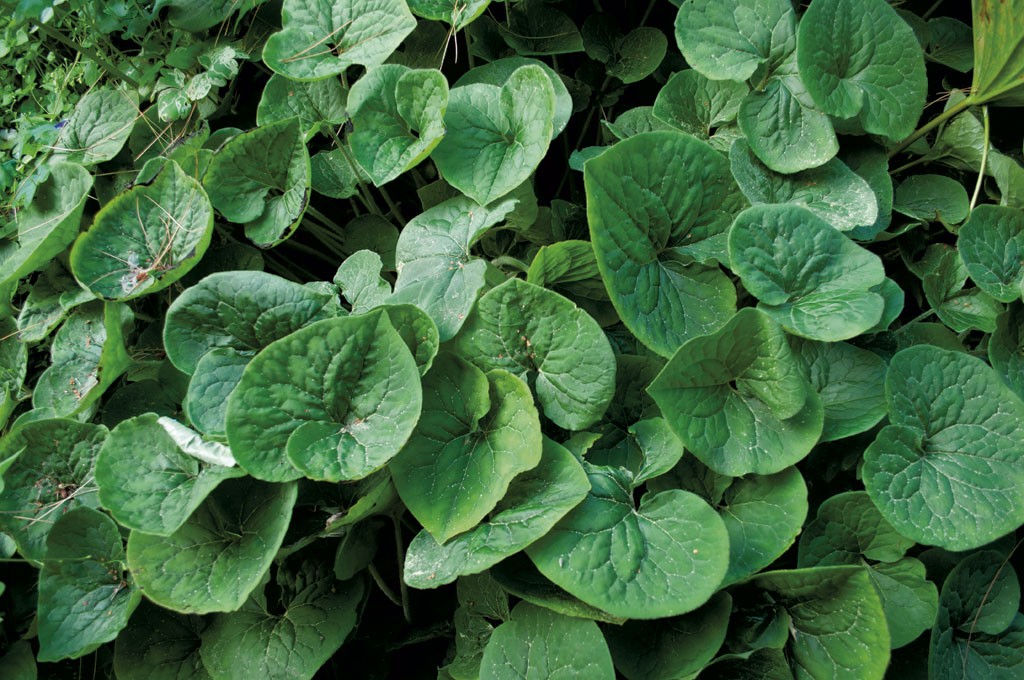 A relative of Eurasian cultivars, wild ginger will spread into a dense cover of fuzzy, heart-shaped leaves, not usually more than 10 inches tall. Around midsummer, the thicket conceals a secret flower — a brownish, ground-hugging orb and one of very few naturally occurring chocolate-hued blooms in the plant kingdom. Kane recommends planting it under shrubs and trees, and says it's uncommonly tolerant of dry shade. Flowers in June and July, full to partial shade.

The Northeast's long-flowering native columbine bestows bowing blooms for much of the summer season, crowned by thin spines that — if you bite the tops off — bear tiny reservoirs of sweet nectar. Even when it's not in bloom, the columbine's lovely sprays of leaflets add a fine filigree to shade gardens and grow well in tight spaces — between rocks, among tree roots, or tucked into stone walls or outcroppings. Flowers May through August, full shade to bright sun. 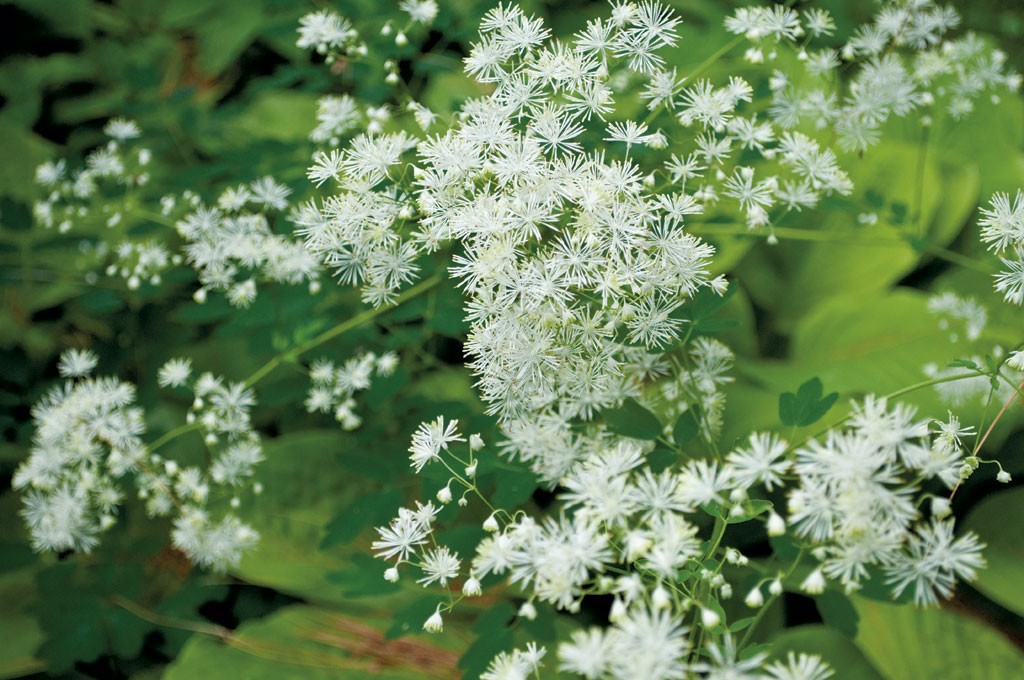 Though not all meadow rues growing wild in Vermont are North American natives, this ethereal buttercup cousin is widely naturalized in our area. It grows in sun or shade with equal verve, which makes it ideal for spots with variable light. Sometimes reaching heights of 10 feet or more (in sunny spots), meadow rue grows tall and quickly, and shades surrounding plants, but won't crowd them out. Plant it in a gap, and it'll fill the space within a few seasons. By late June, its gossamer clusters of showy white, purple or pink flowers conjure tiny fireworks. Flowers in June and July, full shade to bright sun.

With waxy leaves and dainty yellow, star-shaped flowers in early spring, this forest-floor dweller produces sapphire-blue berries by season's end. Over time, Clintonia spreads sprays of oblong, almond-shaped leaves, and it will seed itself into a broken ground cover. It's not super showy but makes a nice understory for hedges, shrubs or bushes, and brings a lively splash of color as spring arrives. Flowers in April and May, dappled and deciduous shade. 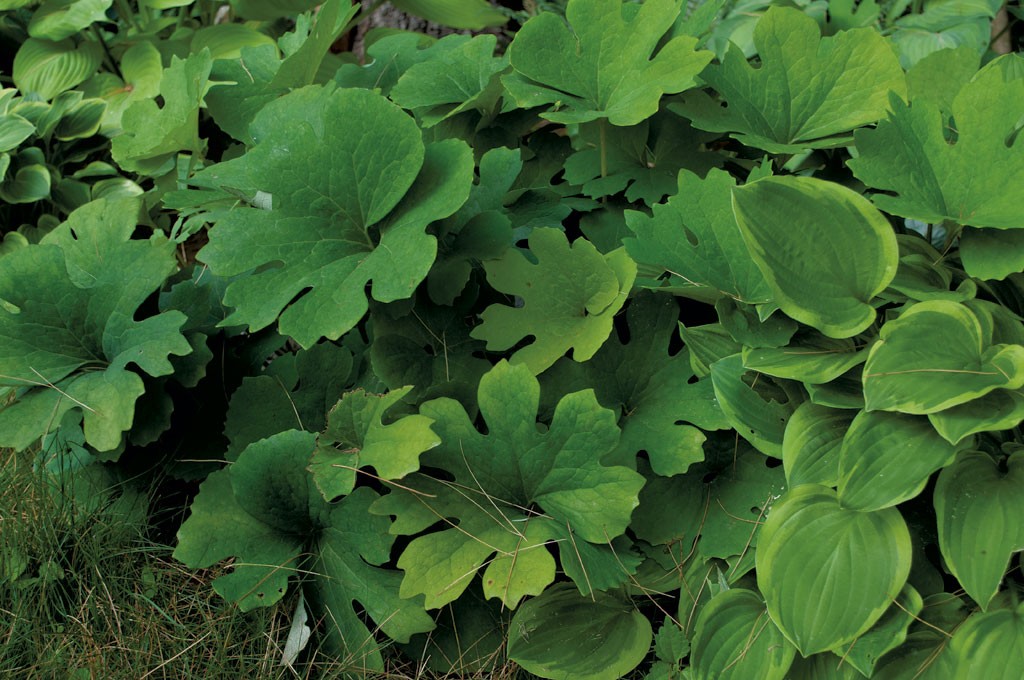 Another harbinger of spring, bloodroot makes a superlative ground cover. As soon as winter breaks, it shoots up an abundance of simple but showy white flowers; when those wither, its deeply cleft, round leaves bring bulk and texture to corners, borders and bare patches. Take care when handling this plant, as it bleeds a deep, rusty henna color and will stain your hands and clothes. So strong is its "blood" that Native Americans used it for dye. Flowers in April and May, full to dappled shade.

If you spend any time at all in the woods in early spring, you're probably familiar with this nodding red flower, which is truly a miracle of threes: three leaflets per leaf, three garnet-colored petals, three sepals, fruit divided into three pods. At Cady's Falls, Avery carries red and white native varieties, but warns they always sell out by early summer, so if you'd like to get some, go early. In the wild, trillium tends to be a single-stalk plant, but at the nursery, Avery selects robust cultivars that grow into clustered clumps up to 18 inches high. Flowers in April and May, full to dappled shade.