Primary Concerns: Vermont's Clerks Prepare for an Election Like No Other 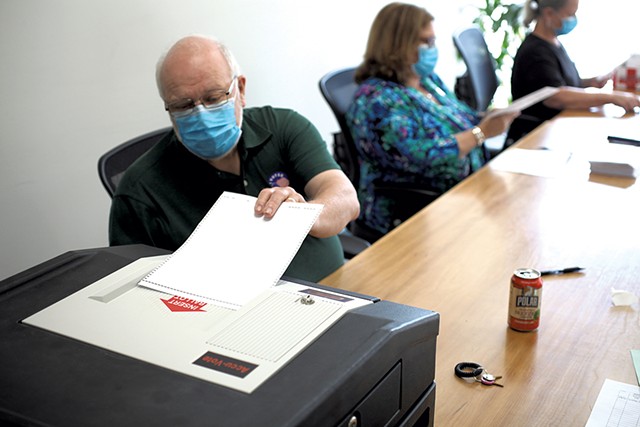 "And we're live!" Schilling declared just after 9 a.m., though the video had actually been live for a few minutes and had captured a worker munching on a breakfast snack.

Schilling, wearing a blue mask, adjusted the laptop camera so it would take in the full scene, a conference room in the town offices adorned with an American flag, a framed poster of Norman Rockwell's "Freedom of Speech" illustration and a potted plant.

Clerks' offices around the state have been inundated with a record number of such ballots in recent weeks as Vermonters embraced the call to avoid their polling places on August 11 and instead to vote by mail.

To date, 147,668 voters have requested absentee ballots; by contrast, 107,637 total votes were cast in the 2018 primary. The number is so high that many communities have adopted creative strategies to handle the flood, including a tactic they've never used before — counting ballots by machine well before Election Day.

Secretary of State Jim Condos empowered them to do so to avoid a crush of last-minute ballot counting that could fray nerves and delay election results.

In Cambridge, Schilling got an unpleasant taste of that stress in the 2016 presidential election, when the high turnout left poll workers without time to run absentee ballots through the tabulation machines until after polls closed. Help had to be conscripted at the last minute to get those ballots counted. Schilling doesn't want a repeat in 2020.

"Based on that previous experience, we absolutely don't want to have that happen with 300 or even 600 ballots," Schilling said. "They gave us the opportunity to do [the processing] ahead of the game, and we're taking advantage of that."

The public need not worry that info about who is ahead in a race will leak early, said Will Senning, Vermont's director of elections. Until the polls close at 7 p.m. on August 11, the tabulator machines can only inform elections officials of how many ballots have been counted, he said. By law, the special program that adds up the results cannot be run until voting has ended on August 11.

"They will not have any iterative candidate vote count results," Senning said. "None of the clerks themselves, none of the workers — nobody will know."

About 135 cities and towns in Vermont have the tabulator machines, while 111 mostly smaller communities still count by hand, according to Condos.

Senning said he doesn't expect major disruptions, but unofficial results could be delayed by the avalanche of absentee ballots and additional COVID-19 precautions.

"Especially for the towns that count ballots by hand, the process may take longer than usual," Senning said.

State election officials set out to dramatically reduce in-person turnout at the polls to protect voters and poll workers from spreading COVID-19. This week, they expressed optimism that their plan is working.

In June, the state mailed postage-paid postcards that made it easy for voters to request an absentee ballot for the primary and the November 3 general election, even though the latter will be mailed automatically. To head off a last-minute surge of mailed ballots, elections officials urged residents to get their ballots in the mail as early as possible.

"There are folks that are voting that have never voted in a primary that I remember." Georgette Wolf-Ludwig tweet this

For those who do vote in person, masks and social distancing will be the norm. The City of Barre is even allowing people to drive up, check in, mark their ballot and turn it in without ever leaving their car.

If the number of early returns is any indication, the primary turnout could be the largest in state history.

"There are folks that are voting that have never voted in a primary that I remember," said Georgette Wolf-Ludwig, town clerk of Fairlee. "I'm quite encouraged. Traditionally, primaries are not well attended."

In 2018, just 198 of 739 registered voters cast ballots in the primary in Fairlee, 12 by absentee ballot. As of Monday, 273 town residents had requested absentee ballots and 173 had already returned them.

Counting absentee ballots is more labor-intensive. Vermont voters receive three primary ballots: Democratic, Republican and Progressive. A voter must fill out only one but return all three, with the marked ballot in one envelope signed by the voter and the unused ones in another.

When the voted ballot is received, one election worker confirms that the envelope has been signed, opens it and passes it to a second worker who feeds it through the tabulator.

"Don't get me wrong," Wolf-Ludwig said. "It's definitely more work, but it's exciting. It's democracy in action."

While the absentee numbers are way up, the total ballot number for a town such as Fairlee is small enough that Wolf-Ludwig thinks poll workers will be able to handle the machine counting on the day of the primary, largely because they don't expect to have much else to do, she said.

"I'd be surprised if we get more than a dozen people at the polls," she said.

Carolyn Dawes, the city clerk and treasurer in Barre, said the flood of returned ballots began in late June, right after voters started receiving them.

"We went over to the post office box on Monday to get the mail, and they handed us one of their big bins overflowing," Dawes recalled. "So it was like, 'OK! We're off to the races.'"

Dawes usually employs the equivalent of four full-time workers, but she's down to 2.5, including herself. Further, some of her longtime poll workers are staying away this year because of concerns about COVID-19. She requested reinforcements on Front Porch Forum, however, and she expects to have 18 to 24 workers on August 11.

In the meantime, she and her staff are preparing the ballots for counting — logging them as received, opening the outer envelope and alphabetizing them — but are saving the last step of running them through the tabulation machine until the evening of August 11, she said.

In Cambridge, Schilling agreed. He and his workers fed 360 ballots into the tabulator on Friday; by contrast, 51 people voted by mail in 2018. Nine of this year's ballots were defective because people didn't sign the certification envelope as required, he said. Those votes won't be counted.

They'll tabulate again before August 11 to keep up with what's coming in, he said.

In past years, in-person voting in Cambridge surged early in the day before people commuted to work and again in the evenings when they came home. Schilling is convinced that, for many, the switch to voting by mail will be permanent.

At the start of primary season, Schilling said, he worried he'd lack enough workers to staff the polls. The absentee balloting has eliminated that concern but replaced it with another.

"Now my biggest fear is that they are not going to have anything to do for 12 hours," he said. "I'm telling them all to bring a book."