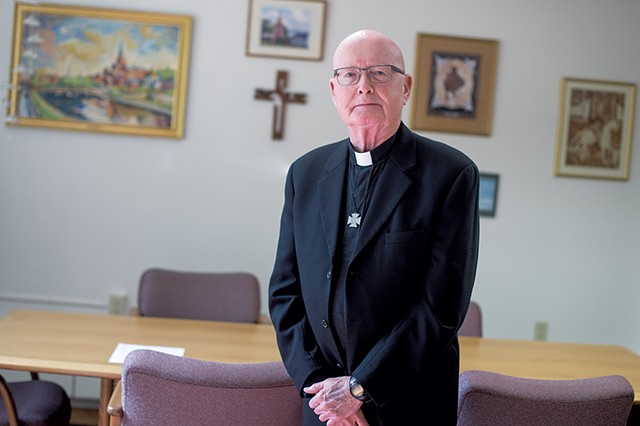 A recent report by the Roman Catholic Diocese of Burlington was billed as an exhaustive accounting of sexual abuse allegations against Vermont priests. Yet the Edmundites, members of the Colchester-based Catholic order that founded Saint Michael's College, have created their own list of 10 accused priests — and released it only on an obscure website where it has gone virtually unnoticed.

The list identifies nine deceased Edmundite priests who did not appear in the diocesan report, even though several were accused of abusing children while serving in Vermont. Two of the men — the late John A. Stankiewicz and the late Nelson B. Ziter — were revered figures at St. Michael's.

College and Edmundite leaders say the allegations are unrelated to campus life.

Edmundite Superior General the Very Rev. David Cray, also a college trustee, nonetheless said he worried how St. Michael's alumni would react to news of the allegations. The Society of Saint Edmund, as the order is formally known, published its findings in early August.

The list is available to those who navigate the society's website to a page labeled "Safe Environments." It had been viewed about 100 times when a Seven Days reporter discovered it on September 16, according to a counter on the site.

St. Michael's did not publicize the list through its channels. Nor did the Burlington diocese mention it upon release of its highly anticipated report on August 22.

Zach Hiner, executive director of the Survivors Network of those Abused by Priests, or SNAP, said failing to actively disseminate names of the accused defeats a key purpose of such lists: helping victims heal. "To not do that is, I think, a cop-out," he said. "The point is not to have the public accounting on your own website so you can say that you've done it."

St. Michael's officials declined to make president Lorraine Sterritt or lay trustees available for an interview, but they provided a statement expressing full support for the "transparency and accountability expressed by the Society of Saint Edmund."

"The College has been in close conversation with the Edmundites as they have conducted their research of past cases," the statement continued. "While this research has not uncovered cases of abuse that occurred on campus, nor any cases since the 1980s, the College recognizes the wounds of abuse are deep — no matter where or when they occurred."

In response to written questions, a St. Michael's spokesperson said it was "appropriate" for the Edmundites, not the college, to publicize the list.

The morning after the list was posted, college officials removed a plaque honoring Stankiewicz from the Athletic Hall of Fame, director of athletic communications Josh Kessler acknowledged.

The Society of St. Edmund formed in France but left for Québec in the late 19th century. The group expanded southward to Vermont and founded St. Michael's in 1904. Edmundites have served as college presidents, administrators, dorm supervisors and faculty members. About half of the order's 22 remaining priests still reside at its garden-lined campus headquarters. Two members teach, and others run the campus ministry. Edmundites control nine of the seats on the college's 25-member board of trustees.

In interviews last week, Cray sought to distance the priests' sins from the college. "This had nothing to do with St. Mike's at all," he said.

Still, several of the named priests lived and taught on campus, and two resided there in retirement after being accused. And one allegation resulted in a lawsuit against St. Michael's.

The suit, filed in 1997 by an alleged victim and obtained by Seven Days late Tuesday, involved the late reverend John A. Lanoue, who taught history at St. Michael's. During his career, he also assisted at a local church, according to Cray. The suit alleged that Lanoue abused a boy who was a parishioner at Holy Family Church in Essex Junction in 1955.

The suit further alleged that the abuse stopped only after the victim's father confronted Lanoue in the presence of then-college president, the late reverend Francis Moriarty. Lanoue admitted the abuse during the meeting, the lawsuit alleged.

"Reverend Moriarity [sic] then assured Plaintiff's father that the matter would be taken care of, but it never was," the complaint alleged.

Lanoue taught at St. Michael's until 1975, according to his obituary. The Edmundites' list states that the order only learned of allegations against Lanoue in 1996, after the priest's death. Cray told Seven Days he didn't know a victim claimed to have reported Lanoue's abuse decades earlier.

"By agreement of the parties named in the suit, the College can only comment that all disputes were resolved to the mutual satisfaction of the parties," a St. Michael's spokesperson said. The college did not respond late Tuesday to a follow-up request about the specific allegations contained in the civil complaint.

The Edmundites' approach to naming priests contrasts with that of the diocese, which issued a press release and highlighted its findings and a victim hotline on its website. Bishop Christopher Coyne also fielded questions at a press conference. The seven-person lay committee that compiled its 40-priest list believed disseminating it would help more abuse victims "come out," member John Mahoney, himself a victim, said.

"Publication of names of the accused says to those quiet victims you are no longer alone — we recognize your pain," committee members wrote.

Cray, who knew some of the accused Edmundites personally, compiled the order's list himself. Rather than limit the list to allegations deemed "credible," as the diocesan committee did, Cray said he included any member who had been accused of abuse. "We prefer to err on the side of transparency," he explained. He listed four of the allegations as "substantiated." Unlike the diocese, Cray did not report where the accused lived, worked or preached, believing it to be less relevant — but he did include the year and state of the alleged abuse.

In each case, he said, the order acted appropriately upon learning of potential abuse.

Journalist Mike Donoghue, a member of the diocesan committee and former longtime adjunct professor at St. Michael's, met with Cray as both reports were being compiled. Donoghue said he requested information about "one or more" Edmundite priests the diocesan committee was looking into, but he didn't seek to examine all of the order's personnel files.

"We knew they were issuing their own report," he said, declining to comment on Cray's work or how it was disseminated.

The diocesan committee never discussed whether to note the Edmundite list in its report, Donoghue said.

Only one priest, Charles G. Many, appeared on both lists.

Two of the priests the Edmundites named were prominent at St. Michael's.

From 1961 to 1967, Ziter was the director of spiritual affairs at the college, where he earned the nickname "Zippy" for his "restless energy," according to his obituary. He also served at Nativity parish in Swanton and Immaculate Heart of Mary in Williston.

Ziter was accused of abuse while serving at parishes in Alabama in the 1970s. Ziter had earlier founded a Boys & Girls Club as part of the Edmundite mission in Selma, Ala. that served underprivileged black children, but was no longer assigned to the mission when the alleged abuse took place, Cray said. U.S. Rep. Terri Sewell (D-Ala.) praised his work in 2017 on the floor of Congress, saying her father credited Ziter with changing the trajectory of his life.

Ziter's Alabama accuser sued the Edmundites in 1994, but the case was thrown out because the statute of limitations had passed. Last year, the Mobile diocese listed Ziter, who died in 2000, as credibly accused of abuse.

Stankiewicz held numerous posts at St. Michael's, including vice president of student affairs, dean of men and moderator of athletics, according to his obituary. He coached sports teams and, according to an alumni account on the college's website, lived for a time in the dorms with students.

The Edmundites paid for counseling for two victims who approached the order about Stankiewicz in 1992, three years after he retired. The priest lived on campus upon his retirement and was inducted to the college's Athletic Hall of Fame in 1994. Neither the Edmundites nor St. Michael's could say whether the college knew of the allegations against Stankiewicz at the time.

"In that case, the whole thing was done very quietly," Cray said, in accordance with the victims' wishes. Stankiewicz died in 2000.

The Edmundites typically kept their accused brethren within the fold. Members of the tight-knit order hold all possessions in common, and leaders believe in removing abusive priests from direct ministry, then treating and supervising them.

"We're not going to risk this compulsive behavior taking place again, but we understand that you probably couldn't help it," Cray said.

The late Paul A. Pinard, a former St. Michael's board member from 1984 to '88, was accused of molesting children in the '80s. He was removed from ministry but continued to live and work with the order after being accused in 1991. The Diocese of Norwich, Conn., expelled Pinard from the Edmundite-staffed retreat at nearby Enders Island after learning of the allegations in 2005.

The Edmundites were displeased, according to reports from the time. Pinard returned to live at the Edmundites' residence at St. Michael's in 2016, a year before his death.

In the case of Many, the Edmundites' most notorious abuser, the disgraced priest decided to renounce his vows in 1994, the same year an alleged victim, John Waddington of Connecticut, began searching for other victims by placing advertisements in newspapers across the Northeast. Many, who lives in Williston, has not responded to recent messages from Seven Days but has previously denied all allegations.

Last year, the Edmundites paid $475,000 of a $900,000 settlement with another Connecticut victim of Many's, according to the Colchester Sun. Cray told Seven Days the order's insurer covered the cost.

The victim's attorney, Kelly Reardon, said she'd found evidence that the Edmundites were likely aware of "warning signs" before Many groomed and molested her client from 1978 to 1981.

Waddington initially won an $850,000 federal judgment against the Edmundites in 2001, but a federal judge ordered a new trial over a legal error. He never got any money and remained bitter, according to reporting by the Day, a New London, Conn., newspaper. In 2007, the Day reported, Waddington drove to Colchester to confront the Edmundites at St. Michael's. Police arrested him for trespass when he reached the college's property.

After the incident, Cray recalled, the order installed locks on the front doors.

Correction, September 25, 2019: An earlier version of this article misstated where in Alabama Nelson Ziter was assigned at the time he allegedly abused children.

The original print version of this article was headlined "Sins of the Fathers | Priests who taught, lived at Saint Michael's College quietly identified as accused"