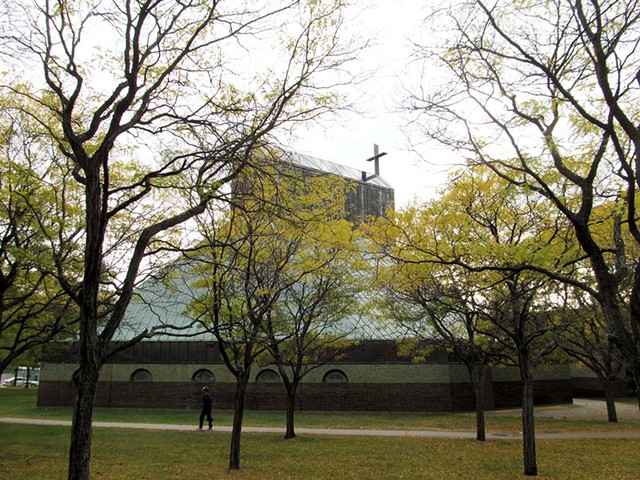 Devin Colman isn't the first to describe Burlington's Cathedral of the Immaculate Conception as an oasis in an urban landscape.

Its 2.2-acre plot is boxed in by the downtown transit center, the stalled CityPlace Burlington project, and busy Cherry and Pearl streets. On any given sunny day, people lounge in the dappled light on the lawn, resting beneath the leafy canopy.

"That grove of trees really sets that building apart from the hustle and bustle," said Colman, the architectural historian at the Vermont Division for Historic Preservation. "In the sanctuary, you're not really aware of the outside city, the urban environment," he said. "It's this really quiet, peaceful place, and that's intentional."

It might also be fleeting: The church is on the market. The asking price is a whopping $8.5 million, causing preservationists to worry that only a large-scale commercial or residential developer will be able to afford it.

"It's not in bad shape at all, and to just throw it away seems sad," said Emily Wadhams, a member of the Preservation Trust of Vermont board. "It would be much more appropriate to find a way to appreciate the architecture and reuse and recycle the building to a new use."

The church closed last December after its dwindling congregation could no longer afford to keep the doors open. Its parishioners now worship at the Cathedral of St. Joseph on Allen Street, just a few blocks away in the Old North End.

The Immaculate Conception property has been on the market for about a month, according to Steve Donahue, principal of Donahue & Associates, which is serving as broker for the parish.

Architects told Donahue that the site could be redeveloped with up to a half-million square feet of space, he said. The city assessed the building and land at $4.5 million, but Donahue and parish leaders priced it for the maximum build-out potential in what is arguably the highest-valued commercial area in the state, he said.

The cathedral is in Burlington's "downtown core" district, which permits buildings up to 10 stories tall, city planning director David White said. Zoning calls for a "vibrant urban center with a variety of high-density building types" and "very active and engaging street frontages."

Preservationists say the building is historically significant, though it's not listed on the state register. However, it is eligible for the national historic register. 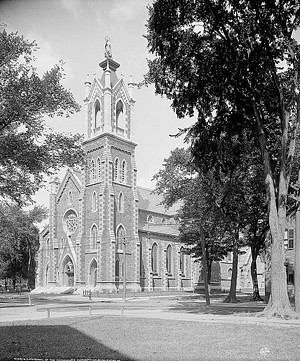 When arson destroyed the original Civil War-era Gothic cathedral in 1972, the Roman Catholic Diocese of Burlington commissioned well-known modernist architect Edward Larrabee Barnes to fashion a new building. He partnered with Daniel Kiley, a former Charlotte resident who is considered the foremost landscape architect of the 20th century, to design the grounds.

The choice was progressive for the custom-conscious Catholic Church, and the result is not your typical house of God. There are no spires pointing heavenward or Stations of the Cross depicted in stained glass.

Immaculate Conception is angular and modern, outfitted in green and brown bricks that mimic the 123 honey locust trees that surround it. Kiley organized the trees geometrically in an evenly spaced grid, aligning them with Barnes' angular walls.

"The landscape and the building are linked," Colman said. "You can't have one without the other."

It's one of the few sites in Vermont that combines a modernist structure and landscaping and that was designed by a duo "as prominent as the Barnes-and-Kiley team," Wadhams said.

Last Friday afternoon, more than a dozen people congregated on the church lawn. One man had suspended a hammock between two trees. A German shepherd and his owner took a break in the shade.

Jay Appleton was waiting for his bus on Pearl Street. He scoffed when asked about the church's historic trees.

"We need housing more than we need trees," he said. "These trees are actually not in the greatest shape. It's cool, but there's nothing sacred about them as far as I think. The city has a lot of parks."

South Burlington resident Ben Richmond stood on the nearby GMT bus platform. Gazing out at the green space, he said it would be "too bad" if the plot were razed.

"It's pretty. A lot of people come here and hang out," he said. "It's peaceful."

Preservation Burlington, a nonprofit that aims to protect historic architecture in the Queen City, lists the cathedral's status as threatened, along with Memorial Auditorium and the Moran Plant.

State architectural historian Colman serves on the organization's board, as does Gwen Langdon, who said the group doesn't want the church to be demolished and pledged to push for preservation once a project comes up for review.

Langdon, who researched reusing religious structures in graduate school, said the conflict between preserving and redeveloping old churches is not unique to Burlington. Many of them were built in town centers where real estate is scarce and expensive.

"It's very attractive, and we see this could be a possible concern depending on who the sale is awarded to and what type of design is planned for the site," Langdon said. "We're not necessarily an organization that says, 'Save it and turn it into a museum.' We see the need for a modern use of a historic structure."

When it was open, Immaculate Conception was operating at a $3,000 loss every week. When Reverend Lance Harlow joined the parish in 2016, he estimated that the 270 members would have to pay $25 a week to keep the church going, he told Seven Days last year. They voted unanimously to put it on the market.

The Cathedral of St. Joseph isn't without its own financial challenges. Its steeple was just replaced after a windstorm knocked the original one askew in 2010. That project was primarily financed, according to Vermont Catholic magazine, by the $2.15 million sale of the former St. Joseph School to the Champlain Housing Trust in 2017. Today, the cathedral's front steps need repair, and proceeds from the Immaculate Conception's sale would help pay for it, said Donahue.

He suggested that selling to a housing developer might be the "responsible" choice, but he said the parish members alone would make that decision. Harlow did not return repeated calls for comment, and Ellen Kane, the spokesperson for the diocese, declined an interview.

The cathedral property isn't yet listed on Donahue & Associates' website because the firm is first marketing it to potential buyers who previously showed interest, Donahue said. He declined to name names.

"It's an exciting opportunity for somebody," he said. "We're certainly hoping for a lot of interest both from local folks and from folks from out of state."

Should the buyer want to redevelop, they'd have to first pass the city's extra layer of review for historic structures, White said. The Development Review Board must consider whether the new use would have the same community value that the historic structure originally provided.

White said such redevelopments "have typically been approved." He pointed to the demolition of the historic U.S. Naval Reserve building to make way for the ECHO Leahy Center for Lake Champlain, which opened on the city's waterfront in 2003. A Navy memorial was later erected nearby.

Wadhams said the Preservation Trust of Vermont has successfully rescued other threatened historic buildings, such as the Watershed Tavern in Brandon, heavily damaged by Tropical Storm Irene, and the Vermont Marble Museum in Proctor, which had closed and was up for sale.

Ideally, Wadhams said, someone would come forward with a plan for Immaculate Conception that preservation groups could present to the diocese as an alternative — an art gallery, performing arts center or other community space. The former St. Joseph School is now the Old North End Community Center, she noted.

Wadhams knows that Burlington could use more affordable housing, but she doesn't think Immaculate Conception is the right place for it. It's too special, she said.

Colman, the architectural historian and Preservation Burlington board member, agrees.

"That piece of land has been used for religious purposes for over 150 years," he said. "It's been a gathering place, a place of congregation for the people of Burlington. It would be great to see that continue."