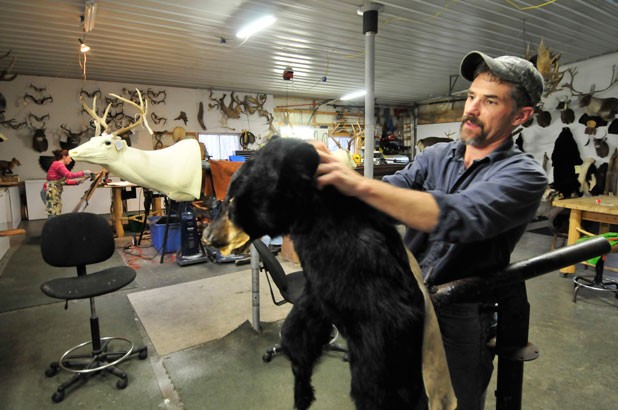 Rodney Elmer is the first to admit a lot of people don’t like hunters. In the hunter-safety course he teaches, he always addresses this right away. People don’t like us, he says, because they love animals. “Their hearts are in the right place,” he tells his students. “Yours should be the same way.”

It’s easy to see where Elmer’s heart lies: with animals, hunting and family — though not necessarily in that order. You’ll find evidence of all three inside Mountain Deer Taxidermy, a business he runs with his wife, Theresa.

On a recent rainy morning, Elmer arrives early at his Northfield shop. He sets a fire in the woodstove and prepares to build a black bear mount. The animal, which was killed last year, has been skinned, its hide washed, tanned and frozen. Elmer has thawed it out and laid it on his work table, its face empty and sagging like a Halloween mask.

He has a lot to do today. A local kid who just shot his first deer, an eight-pointer, is bringing it by later for a lesson in skinning. Then, in the afternoon, Elmer and two of his sons will leave for their annual hunting trip to Maine and New Hampshire. He doesn’t know how long he’ll be gone. Last year he stayed for seven weeks.

This is what it’s all about. “I love deer hunting more than I love work,” Elmer admits. “If I had to have a job that I love, this would be it.”

Mountain Deer Taxidermy is situated near the top of a hill in Northfield. The spacious shop is surprisingly uncluttered, considering the number of animals — and animal parts — on display: by the front entrance, a caribou flanked by beavers, turkeys and ducks; along the back wall, a grizzled bull moose and a young-looking bear; guarding the bathroom, about a dozen deer.

Elmer stands at his worktable mixing up a concoction of Bondo, fiberglass and benzene — that last ingredient is a killer. “The same stuff as cigarettes,” he says. “I try to breathe only as much as I have to.” The smell is dizzying. Even so, taxidermists’ chemicals aren’t as bad as they used to be.

“The industry’s gotten rid of the poisons, the arsenic, some of the formaldehydes,” Elmer explains. “You didn’t use to see old taxidermists, because the chemicals they worked with just killed ’em.”

He looks pretty healthy, considering he’s worked with these chemicals, however improved, for 20 years. Elmer is 45, but without the hint of gray in his brown hair, he could pass for 25. His perfectly symmetrical face is open and friendly.

Elmer scrapes up some of the goopy mixture, which will serve as cartilage, and spoons it into the bear’s ears as if filling a pastry bag. He has about five minutes to shape each ear, rounding the flesh with his fingers, before the mixture hardens.

Behind him, the Styrofoam mold that will give the bear its shape is affixed to a rotating stand. The anatomically correct molds come straight from a catalog and are sold by species, size and pose. This one, naked and earless, looks more like a sea lion than a bear, except for those unmistakable paws.

As Elmer feeds balls of clay down the sleeves of the hide — they’ll serve as segments of the bear’s toes — the door of the shop creaks open. It’s Theresa. She takes off her coat and casually shakes out her hair, the reddish mane swinging to just above the back of her knees. The sight leaves this reporter agape.

Rodney jokes that he sometimes wakes up in the night with a rope of red hair wrapped tightly around his neck. He mimics gasping for air.

“Sometimes I do it on purpose,” his wife teases, tying on an apron and getting right to work.

When Rodney is off hunting, Theresa holds down the shop. She does it all, from the initial consultation with the hunter to the cutting and skinning to tanning and mounting. “It’s kind of a doctor-patient relationship,” she says. “You’re entrusting something really precious to somebody else.”

And it always starts with a story. From the moment a hunter walks into the shop, he or she can’t wait to show off the kill and retell how it happened. The debriefing is inevitable, Rodney explains, “like a couple of fighter pilots when they get back from their mission.”

Often the Elmers try to incorporate part of the story into the mount. Maybe the deer had its head cocked a certain way right before it died. “Or, if it’s a bull moose and he got poked, and he has a big infection, and there’s this knob growing over his head,” Rodney offers. “And the guy wants it in there…”

“We’ve had to do that,” says Theresa, laughing. “We had to rebuild this infected abscess.”

She learned to cut and cape about 18 years ago, when Rodney, who had started to pick up clients for his taxidermy hobby, left on a hunting trip. At the time, Rodney was working in the Barre granite industry, and Theresa was running a daycare program, working a second job in the evenings. They did all the taxidermy on the porch of their home.

The Elmers are both eighth-generation Vermonters — “been here since 1750, before Vermont was Vermont,” Rodney declares — but neither came from a long line of taxidermists. Rodney became enamored of the craft after bagging a caribou during a hunt in Québec. He took the animal to taxidermist Mike Renaud in Winooski and was awestruck by what he saw.

That year for Christmas, Theresa got her husband a do-it-yourself taxidermy kit from Cabela’s, an outdoor outfitter. He tried out a deer, with pretty good results, and was hooked.

After a few years of building mounts part time, working four jobs between them, the couple reached a breaking point. When he was out fishing with his boys, Rodney says, he felt guilty that he wasn’t getting work done for his clients. For Theresa, the last straw was on a Thanksgiving Day. “I had two customers come in, [saying], ‘Are you busy?’ I’m in the middle of pie,” she recalls. “So I said, ‘We’re not doing this anymore. I want to be able to close the door and say we’re closed.’”

The Elmers needed to become full-time taxidermists or stop doing it. Clearly, full time won out.

Now, Mountain Deer is one of just seven or eight full-time taxidermy businesses in the state, mounting up to 300 animals a year. The business also serves as a big-game reporting station for the Vermont Fish & Wildlife Department, offers firearms training, works with wardens, builds decoys, and helps with “CSI sort of stuff,” Rodney Elmer says. “We look at dead animals every day. We can pick that thing apart and then watch ‘CSI’ [on TV] and we’re bored.”

For the most part, the Elmers both love what they do. But they admit it can be stressful, and certain aspects of the process will always be unappealing. For Rodney, it’s bird brains: “They turn into soup,” he says. For Theresa, it’s the mammary glands of bears.

They jokingly threaten to fire each other nearly every day, but the Elmers work well together. After hours of fiddling with an animal’s eyelids, folding and adjusting them for a lifelike effect, one of them might get frustrated and accidentally rip something. That’s when they trade off.

The two have been married nearly 25 years, since she was 18 and he was 21. They met while fishing at the campground her parents owned in Williamstown. The young couple talked by the water, Rodney remembers, and quickly fell in love. They have four sons — the youngest is now 15 — all of whom grew up hunting together and helping out at the shop, skinning and sawing out antlers.

“You don’t keep your kids behind you; they should be beside you … the same with your spouse,” Theresa says of her close-knit family. “And I ain’t walking behind anybody. I’m too short.”

Theresa Elmer is a hunter, too, though she hasn’t gone out much in the past few years. She’s still riding the high of one incredible day in Groton State Forest two years ago. Theresa gestures to the moose head mounted above Rodney’s worktable.

“I’d take that one day over getting married,” she says. “I had a hoot at my wedding day, but…”

Rodney Elmer’s most memorable hunting story is about a deer he named the Grinch. “He was a seven-mile hike,” he recalls. “He bedded down five different times. He brought me … up a 3000-foot peak and round and round and round before I finally snuck up to him.”

The deer bolted when he saw the hunter, and Elmer dashed after it, grunting and pretending to be another deer. “Every predator has his thing,” he says. “Man lies.”

When the Grinch suddenly stopped, Elmer found his chance. He stuck his gun through the brush and aimed. “And all I’ve got is his rear and his head looking over, and that’s not a good shot, that’s not an ethical shot,” he recalls. He knew the shot wouldn’t kill the deer right away. “But that’s what I’m here for. I’ve got to make a decision.”

He pulled the trigger, and the deer fell, but it wasn’t dead. Elmer followed the drag marks and shot it again. By the time the animal let out its last breath, Rodney was petting it, singing to it. He still feels bad about that shot.

Rodney Elmer tells the story of "the Grinch."