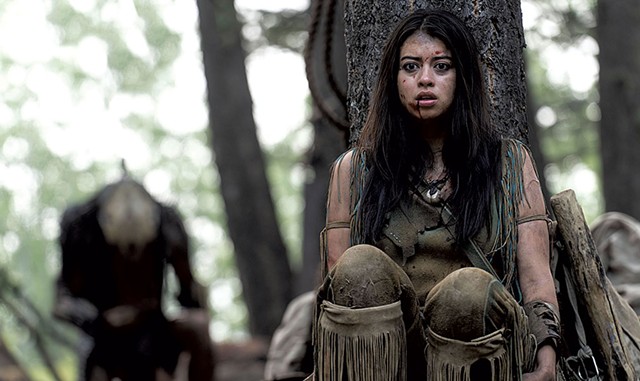 Welcome to another edition of "Let's watch the movie that Film Twitter won't stop talking about." This week, it's a new action flick on Hulu with an unusual setting for the genre: the northern Great Plains of the U.S. in 1719. Also not typical? All of the main characters belong to the Comanche Nation except the villain, a towering, helmeted figure (Dane DiLiegro) whom you may have seen before in a few other action movies. He's a Predator armed with advanced alien technology, and he's out to win himself some warm-blooded trophies in a world of axes and muskets.

When the Predator's spaceship lands in Comanche territory, the only one to witness the strange apparition is Naru (Amber Midthunder), a young healer who yearns to be a hunter like her brother, Taabe (Dakota Beavers). Naru accompanies the men of her tribe in search of a dangerous mountain lion, hoping for a chance to prove her skills with traps and weaponry. Instead, she finds more evidence that a new and deadlier predator is stalking the plains, but the men dismiss her warnings.

Determined to protect her tribe, Naru scours the woods with her loyal dog, Sarii. The Predator isn't the only predator they find — French fur traders are busy plundering the landscape. It will take all of Naru's courage and cunning to face the twin threats to her homeland.

The rise of superhero franchises has given action movies a stakes problem. Even when the protagonists aren't technically superhuman, they often seem that way, because digital effects and balletic fight choreography distance the action from anything that mere mortals could experience. The John Wick movies, for instance, are great fun to watch, but they never make us genuinely anxious about the hero's chances of survival.

In Prey, by contrast, director Dan Trachtenberg (10 Cloverfield Lane) does his best to bring the action down to earth. It's a fitting approach for a movie that initially feels more like a nature-centric Terrence Malick film than an entry in the Predator franchise.

Yes, Prey features some attacks by dodgy computer-generated animals. An early scene in which Naru fends off a ravening bear is still genuinely terrifying, however, because she's a self-trained hunter who has to reckon with unreliable equipment. After missing a shot, she struggles to mend her broken bowstring as the bear surges toward her. It's a carefully orchestrated scene with clear stakes that viewers can relate to, and it grabs us in a way that no amount of pure spectacle can.

Trachtenberg uses tracking and aerial shots to give us a strong sense of place, situating Naru in the landscape she wants to defend. When she discovers a field full of flayed bison, for instance, we feel her sense of violation. And it's all the more shocking to us to learn that the responsible party isn't the Predator (famous for flaying its prey) but the French traders, who embody the casual brutality of colonialism.

Midthunder has a lively intensity that makes us root for Naru, even though her coming-of-age plot is one we've seen countless times before. Aside from the sympathetic Taabe, no one else has a ton of characterization, but it's enough to fulfill the chief requirement of the genre: that we care who wins.

While the French characters speak French, the Indigenous actors playing the Comanche speak in American-accented English interspersed with occasional Comanche phrases, an accessible approach that soon comes to seem natural. (It also has the subliminal effect of making the Europeans seem more "other" to viewers than the Comanche, in case the former's cruelty doesn't suffice to achieve the same result.) For viewers in search of more purism, Hulu also offers a version with the tribe's dialogue dubbed entirely in Comanche.

Prey is an inventive hybrid of period piece and action flick that manages to thrill us despite the absence of big guns and explosions. Toward the end, it leans into hyperreal action-movie pacing, and viewers who aren't literate in Predator lore may occasionally be confused by the mechanics of fighting the creature.

But we stay engaged because the threat feels real: Just like Arnold Schwarzenegger in the 1987 film that started the franchise, Naru can only defeat the Predator by outwitting it. While the men (both French and Comanche) assume that their usual mode of attack should do the trick, she takes cover, observes the creature and learns its vulnerabilities.

The result is a thoroughly satisfying underdog story that taps into the pleasures of old-school action cinema. And Naru's actual dog? Don't worry; the charismatic canine (played by a rescued Carolina dog named Coco) can more than hold its own against a Predator.

Blood Quantum (2019; Shudder, AMC+, rentable): If you enjoyed a Predator movie with Indigenous protagonists, try this zombie movie set in 1981 on a Mi'kmaq reservation, from Mi'kmaq director Jeff Barnaby.

Predator (1987; Hulu, rentable): If you're like me and need a refresher on this enjoyable B movie franchise — yes, it eventually involves showdowns with the alien from Alien — start here.

The original print version of this article was headlined "Prey"