Ask any Vermonter why they choose to live in the Green Mountain State, and they will likely mention summer as one of their top three reasons. The glory of late May through September makes sticking it out through a grueling winter and sluggish spring totally worth it.

Good weather and an abundance of green space make Vermont an ideal region for summer outdoor music festivals. And hot damn, do we have a lot of them. The following selection represents only a tiny fraction of what's in store, but the seven here are some of this year's most exciting. 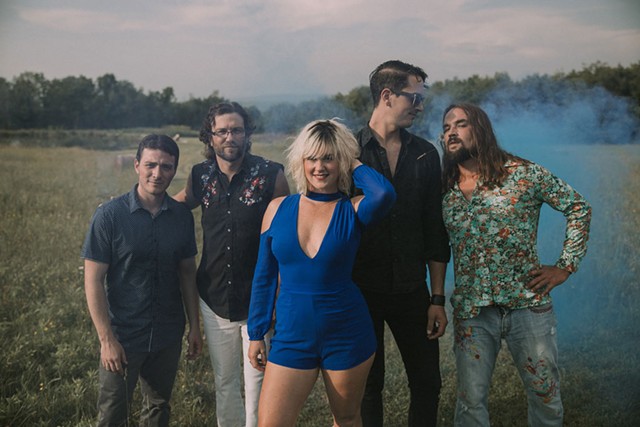 For anyone whose lunch break consists of inhaling last night's leftovers without getting up from their desk, while simultaneously checking emails and setting calendar reminders: Take a break from the norm. Instead of six minutes of screen-filled pseudo-relaxation, enjoy an outdoor, midday concert featuring some of the area's best talent, as well as others from farther afield.

The folks at Burlington City Arts and the Vermont State Employees Credit Union present another summer full of Wednesday and Friday afternoon concerts outside Burlington City Hall on lower Church Street. Every hump day throughout the summer, an expertly curated selection of bands and singer-songwriters alleviates midweek monotony.

Fun fact: "Pocock" is the original name of the Addison County town of Bristol. The quaint village, which runs flush up against the Green Mountains, is pretty much the quintessential Vermont town. Its Main Street boasts a cluster of locally owned businesses, and residents frequently gather on the central town green for special events, such as the annual — and completely outrageous — Independence Day outhouse race.

After the outdoor celebration winds down, popular watering hole Hatch 31 keeps the music going until the wee hours with the Big Pick All-Stars. The assemblage of local players is regularly seen gigging at the bar's weekly bluegrass session, the Big Pick.

The expression "I need a vacation from my vacation" should not apply to Wanderlust Stratton. The four-day event is all about self-care — primarily yoga and meditation. Experts in all things bodywork and spiritual healing help attendees find their bliss.

Aside from workshops, sessions, seminars and talks, Wanderlust offers up plenty of opportunities to get down — particularly at its silent disco. Those unfamiliar with the technologically enhanced dance party will have their minds blown. Instead of pumping out hot beats over a sound system, the silent disco transmits the DJ's mixes into wireless headsets. Ambient noise and idle chitchat get filtered out as dancers make an unbroken connection from source to ears.

Beyond the sweaty catharsis of the silent disco, R&B icon India Arie headlines the musical portion of the multifaceted fest. The "Video" singer-songwriter just released her eighth studio album, Worthy, in February.

At the heart of Do Good Fest is the nonprofit village, wherein a horde of local charitable organizations set up shop to educate patrons on subjects such as homelessness, food justice and domestic violence.

A huge part of the annual commemoration of local marine culture is a series of some of the biggest concerts of summer. Aside from a handful of free daytime shows (when and where are still TBA), the main events, courtesy of Higher Ground Presents, unfold nightly at the waterfront. On Thursday, July 25, soul-pop sensation Lake Street Dive perform back-to-back with neo-Americana group the Wood Brothers. And closing out the series on Sunday, July 28, are Grateful Dead tribute Joe Russo's Almost Dead.

Sandwiched between these two shows, on Friday and Saturday, is a self-contained music festival called Tumble Down, curated by local jam-rock torchbearers Twiddle. Catering mostly to fans of heady artists such as reggae scion Stephen Marley, the two-day blowout serves up funky artists such as Brooklyn ensemble Turkuaz and local rootsy blues trio Nina's Brew.

A slew of wild and wacky bands descend on Junktiques Collective, a popular bric-a-brac and recycled goods shop. On indoor and outdoor stages, Vermont outfits such as punk-rockers PREECE, garage-rock quartet Yestrogen and surf trio Barbacoa converge to do what they do best: shred. New York art-punk groups Ecce Shnak and Monte get in on the action, as well. Also of note, a brand-new, all-femme Blink-182 cover band, called Pink 802, will make its debut.

Otis Mountain Get Down

Though technically not based in Vermont — but just a quick ferry ride across Lake Champlain — the Otis Mountain Get Down is one of the coolest three days of music in the Northeast. Staged atop a former ski mountain in Elizabethtown, N.Y., the weekend offers one of the most cutting-edge and inclusive indie-music lineups on the North American festival scene.

Visitors are shuttled from a remote parking area up the mountain into the event ground, a series of large clearings at the edge of a dense forest. On three outdoor stages, up-and-coming acts such as Brooklyn psych-rock band Habibi and Montréal dream-pop five-piece Anemone serenade revelers as they bask in the temperate Adirondack air.