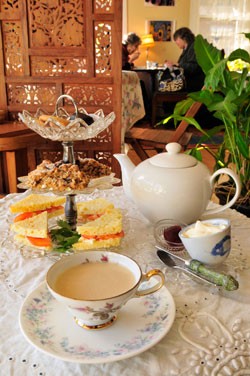 Taking medicine with meals is one thing, but what about taking meals that are medicine? It’s a common concept in China, particularly in Hong Kong, where folks can seek the pick-me-up of a “tonic lunch” on workdays. Diners hoping to strengthen their resistance to winter chills get a prescription of dishes featuring lotus seeds, yams or pears. Almond-and-pumpkin soup helps with shedding pounds. A hypertension sufferer may sup on fried potatoes with vinegar.

There aren’t many places to get a “tonic lunch” in the North Country, but Montpelier’s Tulsi Tea Room comes close. Inside an unassuming house on Elm Street, an owners’ collective has assembled to create a holistic emporium.

Downstairs, the tearoom serves healthy food and drinks containing wares from the Green Mountain Medicinals herb shop in the next room. Upstairs, there are 11 different healing arts practitioners, from massage therapists to an astrologer and henna body artist.

Tulsi Tea Room began in the summer of 2009 as a way to combine the herbal interests of Green Mountain Medicinal owners Adrienne Allison and Ginna Bourisseau with the food-service skills of Solenne Thompson, of vegan confection business Amai Bijoux. Since then, its owners have fluctuated; all buy in with $1000 or sweat equity and share in the quarterly dividends. Currently, four women who work at Tulsi are owners. Thompson, who is primarily responsible for the tearoom, says she’d welcome more.

Not that she’s lonely. Both the tearoom and its adjacent herb shop seem to be constantly buzzing with a gaggle of Earth mothers of all ages. Children are a constant presence. Thompson, who’s expecting in February, has a term for the three infants who already appear with their mothers, her co-owners, at the shop: “tea babies.” Yet, when Tulsi opened a year and a half ago, she says, no one involved was thinking motherhood.

“Have we told you about our fertility clinic?” jokes Bourisseau.

Instead of trying that option, I sit down in the café, which resembles your hippie aunt’s dining room with modern touches, such as micro-close-up photos of cacao pods and flowers, to get my prescription.

Bourisseau joins me and asks how my day has been. Is any part of my body bothering me? Do any issues need addressing?

I tell her that in a couple of days I will be singing on an outdoor stage and my boyfriend has a cold that I need to avoid contracting. “Ah,” Bourisseau says with a smile. “I know exactly what you need.”

A few minutes later, Thompson returns with a steaming pot of Tulsi immune blend with licorice. “The licorice protects your throat, and its emollient properties stop bacteria from sticking ... It helps your system wash and keep cleaning itself,” explains Bourisseau of her concoction.

The tea has a uniquely powerful sugary taste, almost like saccharine. I ask Thompson what sweetens it. “Nothing,” she says — just licorice. “In a lot of tea blends, they’ll put in licorice because it blends everything together. With bitter herbs, it helps make it palatable.”

Bourisseau’s expertise in assigning the right herb to the right person comes from her background as an ayurvedic practitioner. When Tulsi Tea Room first opened, she was also the chef and prepared ayurvedic meals intended to balance and nourish guests’ prana, or life force.

Now Bourisseau has left the kitchen to practice and run the herb shop full time. But each Friday, Tulsi still serves an ayurvedic lunch composed of a grain (usually a blend of rice and quinoa or an amaranth blend), a lentil daal with masala spices, steamed vegetables, homemade chutney, and raita with yogurt made on site.

According to Thompson, this balanced blend of flavors has healing properties. It’s also surprisingly filling, she says: “We have so many people who, with that little meal, say, ‘Oh, I’m so satisfied.’” Thompson radiates such reassuring energy that it’s hard not to believe her.

Since it’s not Friday, I order from the regular menu, which chef Jillian Lauren Lisitano creates weekly. I choose a curry dish and a tempeh burger, but Lisitano insists on also sending out a small fennel salad to optimize the balance of my meal.

The sweet, crunchy raw fennel, with its slight licorice flavor that matches my tea, is dressed with sour cider vinegar, sunflower oil and a hint of tangerine juice. It’s topped with dried currants and delicate fennel fronds, as well as a few tangerine segments.

The dish calls to mind the balance of Thai cuisine, which seeks, in theory, to feature equal proportions of spicy, sour, sweet, salty and bitter on every plate. Lisitano explains that ayurvedic meals have the same goal, but balance six flavors: sweet, sour, salty, bitter, pungent and astringent.

In ayurveda, the hope is that in a full meal, the chef will hit each of those components. But, Lisitano adds, “If you can do that in each dish, that’s really special.” She does it in the salad.

The next dish, chana saag, performs the feat even better. The chickpea and spinach stew is gingery, with a heat that builds as I chew. The flavors are more reminiscent of Tibetan or Nepalese dishes than Indian ones — a nice surprise even to Lisitano, who says she has little knowledge of Himalayan food.

On the side are delicate glass receptacles filled with sweet and smoky tomato-and-cilantro chutney, and cucumber raita made with tofu cream instead of yogurt. This is the chef’s one misstep. The goal of a raita is astringency and sourness. But the bland tofu simply doesn’t have the bite of real yogurt, which Lisitano makes herself and uses in other dishes, including a refreshing bilberry lassi drink.

Pungent, earthy flavor is the star of the tempeh burger. Crisp on the outside, the patty is firm and meaty, and flavored with cumin and coriander. The tofu-curry cream, served on the side in a tiny glass bowl, is luscious. It’s surprisingly similar to the curry aioli at meat palace Duckfat in Portland, Maine. The smooth sauce sparkles with the spices of garam masala, making me forget that, instead of eggs and oil, it’s made with tofu and something called Vegenaise.

Lisitano, who trained as a macrobiotic chef at the Kushi Institute in Massachusetts, is a vegetarian — and a vegan when she’s not tasting her yogurt. But not all of Tulsi’s owners avoid meat. Thompson was vegan when she started Amai Bijoux, but after moving back to Vermont from Oregon, “I started eating dairy, then meat,” she admits.

There are even fewer places to get great vegan desserts, but Tulsi delivers those in spades. A case in the tearoom is packed with Thompson’s Amai Bijoux treats.

Blueberry- and black-sesame-filled chocolates called Blue Moon Cakes are dense and chewy, with an almost alarmingly deep flavor of cacao. Truffles called Maca Meltdowns feature a Peruvian root that’s considered a libido enhancer by many naturopaths. The honey-sweetened chocolate probably would be sexy enough on its own, with its creamy, crumbly texture and healthy dose of cinnamon.

Lisitano offers more substantial desserts, also free of animal products and processed sugars. Moist coconut-and-date scones taste more like delightful little cakey muffin tops. The dark-chocolate-almond torte is worth my drive from Burlington. Light, almond-filled layers of sponge cake taste like marzipan. Somehow, the tofu chocolate mousse, layered inside the cake and used as frosting, works despite the absence of dairy. The overall effect is strikingly similar to the Bosnian walnut cake available at Café Mediterano in Essex. Maybe Tulsi’s herbalists wouldn’t prescribe cake, but there’s little in it to hurt you.

Right now, Bourisseau and Allison of Green Mountain Medicinals are the only ones issuing tonic prescriptions at the tearoom. Lisitano hopes that will soon change: She wants to be more like the healers of Hong Kong.

“I think that’s a really wonderful way to work with your guests to give them what they need,” she says excitedly. “If you had several dishes that day that you were serving, you could talk to them a little bit about what they’re doing and what you might suggest for them.”

In a large skillet, sauté the peppers, red onion and garlic in olive oil with sea salt for 10 minutes. Transfer to a mixing bowl, add remaining ingredients and mix. When all ingredients are blended, let chill. Form chilled mixture into eight patties and coat with white rice flour.

Put all ingredients in a food processor or blender and puree.

Heat oven to 350 degrees. Line a 10-inch springform pan with parchment, then oil.

Mix all wet ingredients and all dry ingredients separately, then combine. Be careful not to over mix or the sponge will become tough.

Bake for 30 minutes, or until your cake is golden and a skewer comes out clean.

Using a double boiler, bring water to boil in saucepan and fix a mixing bowl that fits in saucepan to melt the chocolate chips.

Process tofu in a food processor till it resembles a smooth cream. You may need to scrape down the sides of the bowl to be sure the tofu is completely blended.

When chocolate chips are melted, pour into tofu cream and continue blending in food processor.

Decorate the cake with sliced or ground almonds.