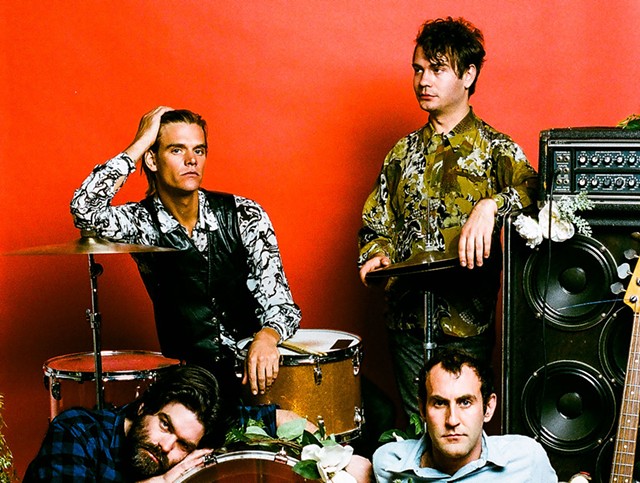 Here's a quickie primer on Canadian post-punk band Preoccupations: They make raw and brooding new wave-inspired rock that seethes with dark energy. They also used to be called Viet Cong, a hastily chosen name that led to a year of trouble.

In early 2015, internet-based calls to boycott the group led to several show cancellations. Later that year, its members decided to choose a new name that wasn't taken from a violent insurgent group that committed horrible atrocities in the Vietnam War. They unveiled Preoccupations in the spring of 2016 and a self-titled album that fall.

Fortunately, both critics and fans seemed to forgive the group — though not without raking them across the coals for waiting approximately a year from the initial public controversy to choose the new moniker. It was a learning experience, to be sure.

Even with its members now living in Toronto, Montréal and New York City, the band seems somehow tighter and more together than ever before. Preoccupations' latest LP, New Material, is a staggering body of work that nudges their sound toward pop while still retaining a jagged edge.

SEVEN DAYS: What's one good thing and one bad thing about the band being spread out?

SCOTT MUNRO: One good thing is that we're always pretty stoked when we hang out again. And one bad thing: We don't really jam, ever. We get together before a tour and jam solid for two weeks. I think we'll get together four or five days before our Vermont show and try to learn a new song or two. I think if we were all living in the same city, maybe our output would be quicker.

SD: It seems like the theme of Preoccupations was understandably deconstruction and reconstruction. How would you describe New Material?

SM: For me, it was a bit of a return to what we first started out doing. A lot of New Material was just me and Matt [Flegel] in the studio. That's how we did our first EP, just me and Matt in my basement playing everything and recording it ourselves. And this one kind of felt like it was a return to that — although everybody's on this record, of course. We spent a lot of time just dicking around with it on our own, though. This is also the first one since our first EP that I recorded all of, which was fun.

[For] this record, we went into the studio with nothing. So the initial session's just a lot of jamming — me and Matt and Mike [Wallace] just jamming on whatever riff anybody had. Danny [Christiansen] was deejaying sci-fi movies. We went in with no songs. We were just trying to figure out some ideas.

SD: In a piece for Paste magazine, you said, "My ultimate goal would be to make a record where nobody knows what instrument is playing, ever." Can you expand on that statement?

SM: Oh, yeah. I remember saying that. I kind of want the guitars and the keyboards [to be] blended together with samplers blended in. I just find that kind of stuff interesting. I don't know if you're a This Heat fan, but I remember the first time I heard [them] just being like, What the fuck is even going on? There's guitar and drums, but then there's something else happening, too. It turns out [a band member] was playing organs most of the time, but it sounds crazy. It sounds like he's shredding on bass guitar mixed with tape drones or something. I think those records really inspired and influenced me.

SD: You're kind of a gear-head, right?

SD: I don't know if you know this, but someone is compiling your whole gear collection on Equipboard.

SM: Oh, yeah, I go on Equipboard all the time. There's a page about me, or about my band?

SM: Oh, my God. They should email me.

SD: Everything they've put on there needs verification.

SM: Oh, wow. Last time I was on there, I was looking at all of the gear Liam Howlett from the Prodigy uses.

SM: Yeah, totally. I'm always fascinated — like, when I hear a sound on a record I really like, I'm always just like, How do you do this? I want to be the master of that sound.

SD: I just watched Preoccupations' episode of Pitchfork's "Over / Under," and think we didn't hear enough from you. Care to play a little game with me I just invented called Meh or Hells Yeah?

SM: I feel like I've never properly had avocado toast, but I'll give that a hells yeah.

SM: I haven't listened to it. Though I heard the one single, and it was pretty cool. I'll give it a hells yeah.

SD: Last one: Questions about your band's name change?

SM: Uh ... I don't know. They're fine. [Laughs.] I've spoken at length about that topic a lot of times. So now I'll say ... honestly, I'll say hells yeah, because I feel like that was a pretty interesting time, to say the least.

At first we didn't really talk too much about it, because it was tricky to figure out [how] to talk about, I guess. But ultimately I feel like it was a good thing. Everybody just needs to remember that the goal is to have a good society. And if anybody has a different goal, [they're] an asshole.

The thing that I've really come out of it with is that maybe it's OK sometimes to not know what the right thing to do is, and just to figure out who the person is that is in a position to make that sort of call. And then defer some of the judgment to that [person].

I feel like our society is in a moral adolescence right now, where people are just sort of figuring out what's acceptable, with the interest of society being a comfortable place for everyone to exist. That's a good goal. And if that's not [your] goal, then you need to reevaluate whether you're a contributing member to society.

SM: I think people, on both sides, pick fights for the sake of picking fights. For example, we still get hate mail all the time on both sides of [the Viet Cong controversy]. We get hate mail about our old band name, but we also get right-wing hate mail from people that are like, "Freedom of speech! You should've kept your band name."

I felt like the initial situation was basically shitty and ignorant, and then our response was mostly slow. But it just took such a long time to find a new band name. It was a nightmare. But we made a decision that I can stand behind. I think we did the best that we could at the time.

The original print version of this article was headlined "Lesson Learned"