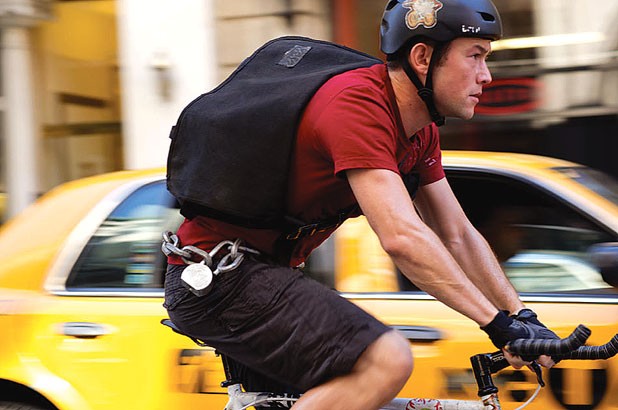 Reason No. 1 is the film’s refreshing twist on the tradition of the chase movie. This time, the vehicles speeding from one end of Manhattan to the other — through, up, down, inside, under, around and over all manner of gridlocked obstacles — aren’t cars. Welcome to the high-velocity, high-risk world of the New York bicycle messenger.

Reason No. 2 is Joseph Gordon-Levitt in the role of Wilee, a Columbia Law School dropout who somewhere on the road of life decided the wheels of justice didn’t turn fast enough for him. The pay isn’t great (“Eighty bucks on a good day,” he narrates), but the thrills and challenges are. Favoring a stripped-down fixie with neither gears nor brakes, Wilee is fearless, the best of the best. “Goin’ down Broadway at 50 with no brakes — what could be better than that?”

The answer, it turns out, is not having a wack-job NYPD detective on your tail. That would be officer Bobby Monday, a psycho with a badge who could have graduated from the same police academy as Nicolas Cage’s Bad Lieutenant. He’s played by Michael Shannon, reason No. 3 why this picture is so much better than it should be.

The bug-eyed actor was born to rivet, and has a freaky field day with the part of a cop in the grip of a serious gambling problem. Monday is in over his head with loan sharks, which is why his life depends on intercepting the package Wilee is rocketing toward a mysterious Chinatown address. Sources have informed the messenger that it contains a ticket worth $50,000.

Initially, the cop figures his car gives him the advantage. Then director/cowriter David Koepp (Secret Window) starts pulling pulse-pounding stunts out of his bag of tricks. The chase scenes are expertly shot, with the audience often sharing the cyclist’s perspective as Wilee eludes his pursuer by riding against traffic on one-way streets, shooting through impossibly narrow spaces between street-clogging autos, soaring over fences, pedaling across roofs and hoods, and blowing through red lights.

Koepp minimizes the use of CGI. Virtually all the riding in the movie is real, though he employs a digital effect that’s a pip: As our hero nears busy intersections, the filmmaker freezes the scene, and we look on as Wilee instantaneously projects the outcome of potential routes through the maze of cars and pedestrians. An animated arrow shows the result of this twist or that turn, and watching Wilee think fast is a blast. He’s got the instincts of a Generation Y Neal Cassady.

There’s not a lot more to the story. Sometimes keeping it simple is a good thing, and Premium Rush is a case in point. It’s a race-against-the-clock thriller that boasts an appealing lead, a villain who’s more fun than a barrel of Christopher Walkens, bigger laughs than you might expect and action sequences as breathtaking as they are brashly original.

Uh, unless they’re not. Original, that is. Columbia Pictures, Koepp and cowriter John Kamps are currently defendants in a copyright infringement suit filed by author Joe Quirk, who claims the picture is a rip-off of the screenplay he presented to the studio based on his 1998 novel, The Ultimate Rush. It’s about a San Francisco messenger who runs into trouble similar to Wilee’s. Last month, a federal judge declined to dismiss the claim.

Holy Fareed Zakaria, Batman! It’ll be a while before all the facts are known. No point in a Rush to judgment, so to speak. Until proof positive to the contrary arrives, I’ll continue to make the case that the latest from Koepp & Co. is one of the summer’s wildest, most inventive rides; a lovably loopy adrenaline fest that definitely delivers.