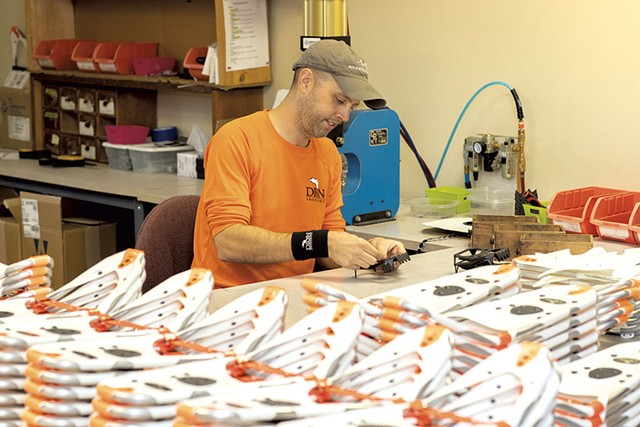 In a storage room lined with shelves of snowshoes, Bob Dion held up a pair at arm's length and eyed it carefully. He checked the symmetry of the rivets, the angle of the aluminum frames, the curved seams on the bindings. He repeats this process with every pair of snowshoes assembled at his shop in Pownal.

That's part of the reason the company he started more than 20 years ago, Dion Snowshoes, has attracted a cult following among racers and winter hikers seeking high-performance, customizable footwear. The brand is small, but it's a dominant presence in the snowshoe-racing world. Customers are drawn to Dion's history as a championship racer and longtime trail runner: He has won two gold medals, two silver and one bronze in the U.S. National Snowshoe Championships, and he has competed in hundreds of ultra-running races.

His grassroots marketing strategy doesn't hurt, either. When he shows up at races around the country — many of which Dion Snowshoes sponsors — not only does he bring extra equipment for people to borrow, he's also been known to take the snowshoes off his own feet so other racers can try them out. It's this personal commitment that sets Dion apart. He makes the snowshoes he wants to run in. He has observed over the years that "a lot of [representatives from] snowshoe companies will show up at races, and they've never been on snowshoes before."

"There are so many places you can go snowshoeing and it doesn't cost you a dime." Joanne Petrozzi tweet this

Derrick Spafford, a racer and coach who owns Spafford Health and Adventure in Yarker, Ontario, discovered Dion Snowshoes 15 years ago at a race in the U.S. "Everybody was wearing them, and I'd never seen them before, so I tried out a pair," he recalled. "I was like, Wow! They were the most responsive and efficient snowshoes I'd ever used."

But building a business for more than two decades takes its toll. In 2019, Dion, 67, and his wife Denise, 64, who's also an avid snowshoer and National Championship medal winner in her age group, decided to shift gears. They sold Dion Snowshoes to NeviTREK Snowshoes, a one-person company run by Joanne Petrozzi, 65, in Delanson, N.Y., just south of the Adirondacks. Petrozzi's longer, wider snowshoes appeal to casual winter enthusiasts and people who hunt and ice fish rather than high-octane competitors.

The Dions and Petrozzi had bumped into each other at snowshoe races and winter-sports trade shows, and they saw in one another the same commitment to high-quality handcrafted products — and to keeping their businesses small and focused on customer satisfaction. But Petrozzi, who'd been in business half as many years as Dion, agreed to buy Dion Snowshoes on one condition: that Bob and Denise stay on as coworkers, collaborators and unofficial partners.

As the two companies gradually consolidated their manufacturing operations in Pownal, everyone got something they wanted: The Dions decreased their involvement in the financial management of the business, and Petrozzi got access to the Dions' deep well of experience and knowledge.

"Suddenly, I had someone I could bounce ideas off of, which made my work much more fun," Petrozzi said. "It made sense for us to combine because we hardly overlapped at all when it came to our customers."

Neither of the Dions nor Petrozzi had donned a pair of snowshoes until they were adults, but each got hooked quickly. Petrozzi loved the peacefulness of trekking in the woods. The Dions loved the adrenaline rush and cardio challenge of racing. Bob Dion won the first race he entered — which was also his first time on snowshoes — and racked up race after race, win after win. But the snowshoes banged up his ankles with every stride. "You had to heal between races," he recalled.

Because he'd studied mechanical design and worked in drafting, technical illustration and lab instrument design, he headed into his garage to come up with a better model. He took his prototypes to races and let others try them out. "We got feedback immediately, so we learned a lot," he said.

Sixty miles away in New York State, Petrozzi, an engineer, was still new to the sport when a work colleague mentioned that his father-in-law was selling a shop full of snowshoe-making equipment. She jumped at the opportunity.

"I grew up around machines, working with tools," said Petrozzi, a self-described "fix-it kind of engineer," who previously worked on repair outages for steam turbines owned by power companies. "So making snowshoes looked a lot like stuff I'd been doing all along."

Today, NeviTREK produces a little over 200 pairs of snowshoes a year, selling most of them online. Dion Snowshoes makes between 1,500 and 2,000 pairs; roughly two-thirds are sold online, and the rest go to small bike and ski shops and directly to customers at races. All the manufacturing takes place in a modest wooden office building on Route 7 in Pownal. There, Dion and Petrozzi work alongside Denise, when she's not working her day job as a bookkeeper at a nonprofit, and two other employees, Tonya Van Buren and Ross Richards. Dion and Petrozzi make a point of sourcing as many of their materials and parts as possible — about 90 percent — in the U.S.

When Dion was first starting out, he kept his product even more local. "I used to run 100-mile races, and I had a rule that I had to be able to run to the supplier," he said. "It wasn't so much about manufacturing for me. It was more like a craft. I would look at old snowshoes, with the wood frames and the lattice — that was a craft." But he added, "The problem with craft is, it's hard to scale. If you make 100 times more snowshoes, it takes 100 times as long."

NeviTREK sells two lines of snowshoes for recreational walking and hiking; they run between $140 and $175. Dion snowshoes are modular, with four different models of frames assembled in advance; customers choose from three different bindings and three different cleats, depending on how and where they'll be using the equipment. Prices range from $200 to $300.

"We get emails every day from people asking, 'How do I choose?'" Petrozzi said. While many snowshoe makers categorize their equipment only according to the weight of the intended user, both Dion and Petrozzi say that's not enough. There are other factors to consider: terrain, for example, and snow conditions.

Dion noted, "People go to a bike shop and get asked all kinds of questions. 'Are you mountain biking? Are you on gravel? Fat biking? Riding hills? Racing?' It's the same with snowshoes. The frame, the binding, the cleat — it matters. Are you running or are you walking the dog? Or are you a hunter going out in the woods? Where do you live? What kind of snow do you have? What kind of traction do you need?"

"We are into educating people," Petrozzi said.

That's why she and the Dions send loaner snowshoes to every race they hear about. "Most people aren't going to buy a $250 snowshoe until they can see if they like it," Dion said. And when potential customers say they prefer skiing, Petrozzi points out that snowshoeing comes without high ticket prices and long lift lines. "There are so many places you can go snowshoeing and it doesn't cost you a dime," she said.

Spafford, who sells Dion snowshoes in Canada through his coaching business and online store, takes his cue from the Dions and Petrozzi.

"It's about getting snowshoes on people so they can see it's an open and fun activity for anyone," he said. "If you can walk, you can snowshoe, and if you can run, you can run on snowshoes. It's a heck of a lot more fun than being on an icy road or running on a treadmill all winter."