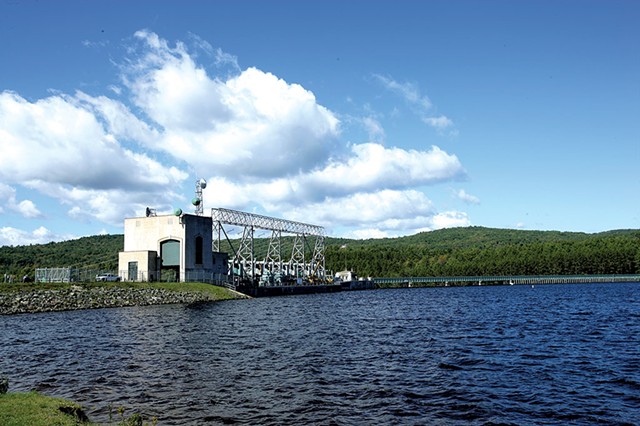 The pressure is on Vermont's Hydropower Working Group, the seven-member panel convened to vet the state's possible purchase of a chain of local hydroelectric dams.

On March 17, TransCanada announced it would sell its northeastern power-generating business, including 13 dams on the Connecticut and Deerfield rivers in Vermont, New Hampshire and Massachusetts. Acquiring those renewable energy sources represents a rare opportunity for Vermont. Gov. Peter Shumlin and legislative leaders gave the group less than a month to make a recommendation so the legislature could take action before adjourning in early May.

Former state senator Vince Illuzzi doesn't need any more time: "As far as I'm concerned, we should buy these dams, unless there are any brick walls that should stop us right now," he said. "I haven't seen any yet."

Illuzzi touts the purchase as compatible with the state's goal to reduce its reliance on carbon-based energy sources. He also believes publicly owned power has the potential to be cheaper because there is no need to generate profits for stockholders.

When he was a senator, Illuzzi pressured a reluctant Gov. Jim Douglas to set up a power authority that researched and bid on these same dams a decade ago. But the state lost out to TransCanada. The Canadian energy giant offered $505 million, $130 million more than Vermont and its partners. Now Illuzzi, a Republican state's attorney and lobbyist for the Vermont State Employees' Association, is making the same pitch to the more amenable Shumlin administration.

But State Treasurer Beth Pearce is responding with caution.

"There is an opportunity here," she agreed, but also "a lot of questions that have to be answered up front before we proceed in an expensive endeavor." She said she needs to be certain that the dams will have value for taxpayers and that borrowing the money to buy them won't damage the state's credit rating. She has yet to see that evidence, as she noted at the April 20 meeting of the Hydropower Working Group. "We are a couple of weeks into this, and I don't think we have answered the fundamental questions," she said.

For Pearce, those include: Will TransCanada sell the dams separately from the other assets it's looking to offload, which include three gas-fired power plants and a wind farm? What is the asking price? What is the value of the dams — that is, how much power do they generate, and what will electricity buyers pay for it?

Even without answers to those questions, Justin Johnson, secretary of administration and chair of the study group, said he expects to ask Pearce, Illuzzi and the other panel members to make the "go or no-go" decision by Wednesday. "The most likely outcome is we would ask for authority to continue to work on it," he said.

It's not just the legislature's impending departure that necessitates a speedy decision. TransCanada wants to sell its northeastern generation properties by midsummer, said Chris Recchia, commissioner of the Department of Public Service. The company needs the money to help finance its purchase of a Texas-based gas pipeline company for $13 billion. TransCanada is primarily in the oil and gas pipeline business, and its holdings include the Keystone Pipeline.

"They aren't asking a particular price," Recchia said. "This will be done in an auction." First the company would gauge interest by soliciting nonbinding bids. Then it would invite serious bidders.

The hydropower system that Vermont could end up owning and operating starts with two storage dams on the Connecticut River in northern New Hampshire. They hold back water for use at power-generating sites downstream, according to John Ragonese, licensing manager for TransCanada. To the south, after the river becomes the border between Vermont and New Hampshire, three power-generating dams are clustered between the Vermont towns of Waterford and Barnet. Farther south are Wilder Station in Hartford, Bellows Falls Station in Rockingham and Vernon Station near the Massachusetts border.

The Deerfield River system starts with a storage dam in Somerset in south-central Vermont and includes two generating stations in Vermont — Searsburg and Readsboro — and five more after the river flows into Massachusetts.

The 13 dams could produce 560 megawatts of power under optimal conditions, although Ragonese said actual generation depends on water levels.

There are other variables. The Federal Energy Regulatory Commission issues 40-year operating licenses to hydroelectric facilities; three Connecticut River dams — Wilder, Bellows Falls and Vernon — are set to expire in 2019. Recchia predicted that the new permits could come with more demanding environmental requirements, such as river-flow changes to ameliorate riverbank erosion and improve fish habitat. That could potentially decrease power output.

The FERC issued new licenses to the three power-generating dams on the northern half of the Connecticut River in 2002 and to the two Vermont dams on the Deerfield River in 1997.

The sale of the dams was a hot topic at an April 18 meeting of the Connecticut River Joint Commissions, a pair of educational and advocacy groups from New Hampshire and Vermont that have met quarterly since 1989. Brendan Prusik of Colebrook, N.H., quizzed his Vermont colleagues about the state's interest in buying the dams: "What is the incentive?"

One of the commissioners representing Vermont, David Deen, told Prusik that state ownership might reduce electric rates. "The public power authority of New York offers some of the cheapest power in the region," said Deen, who is also pushing for the dam purchase as a rep in the Vermont House. He pointed out that the New York Power Authority, whose hydro assets include more than 2,000 megawatts of generating capacity at Niagara Falls, is the largest public power entity in the country.

Chris Campany of Brattleboro, who heads the Windham Regional Commission, said the state's evaluation was moving so fast that towns that could be affected haven't had time to react, and they "should be involved in the state's decision." TransCanada owns nearly 20,000 acres in the Deerfield watershed, and the company is the largest taxpayer in several communities. Campany said local officials want to know whether they could count on revenues equivalent to what TransCanada now pays in taxes if the state were to own the dams.

Ten years ago, when the state and two private partners bid on the dam, state officials promised towns that they would continue to receive taxes.

To begin to pull together the necessary information about the potential purchase, Johnson just sent out a request for proposals to consultants who could help the panel estimate the future value of the dams, evaluate different ownership models, and describe how buying the dams could advance the state's energy and environmental goals. The study panel approved that step last week — but Pearce was not easily persuaded.

Johnson suggested the panel couldn't get answers to critical quetions without paying someone to do it.

"I would want to firm up some information over the next week before I commit too many dollars," Pearce said.

"I don't think there is a cost to issuing an RFP," Illuzzi said. "The substantive decision is when the proposals come back." He made the motion to approve solicitation of proposals.

Pearce finally agreed that if it was clear that "the state is under no obligation ... then I would be comfortable putting out an RFP."

Lt. Gov. Phil Scott echoed Pearce's concerns and added a few of his own.

"I don't feel I know the basic information," he said late last week. "I'm concerned when people say, 'Run, don't walk.'" While he supports evaluating the potential benefits and risks of a state purchase, Scott emailed six utility officials, urging them to conduct their own review "to determine if there's potential for you to establish a cooperative to purchase the dams — especially if it has the potential to lower our state's electricity rates."

"All the utilities have met on this," Christine Hallquist, CEO of Vermont Electric Cooperative, said. "Financially for any of us, we don't have the capacity" to buy the dams, she said. "We are really all waiting for the recommendation" from the study committee.

Despite the talk about getting green power for Vermont, Recchia noted that the state's utilities don't currently need the electricity produced by the dams — a claim Hallquist, Lunderville and Schnure confirmed. "All of our utilities have planned ahead three to five years about where they are going to get their power," Recchia said. TransCanada has been selling its hydroelectricity on the wholesale market.

Recchia also noted that power from the dams might not be so cheap if the state had to borrow money to buy them. "The state would want to sell this at the highest possible price until the bonds are paid off," he said, noting that after 20 or 30 years, the price might drop to a point where it becomes attractive to utilities.

Lawmakers will have to decide whether they have enough information to move forward.

"I would like a recommendation about what kind of structure we need to pursue purchase," said House Speaker Shap Smith (D-Morristown), who sees value in securing locally produced power. "I think we could create an authority," he continued, referring to a legal entity that could be empowered to bid. "There is a difference between creating the authority and making the purchase."

Republican legislative leaders are more cautious. "I'm not in any rush," said Senate Minority Leader Joe Benning (R-Caledonia). He suggested the enormity of the commitment would make it worthwhile to call the legislature back for a special session to make any big decision.

House Minority Leader Don Turner (R-Milton) said he has become more skeptical about the purchase: "There are so many things that would have to be in place. It would take a year before we could get through all the issues to decide whether to buy or not."

Illuzzi argued that if lawmakers fail to create an acquisition authority, the state will miss another chance to buy the dams. "I want to set the stage to be able to move forward after the legislature adjourns. You have to take a little risk in life," he added, but promised, "Nobody is going to charge ahead unless the numbers work."