Power Play: Developers Race to Run Lines Under Lake Champlain and Beyond 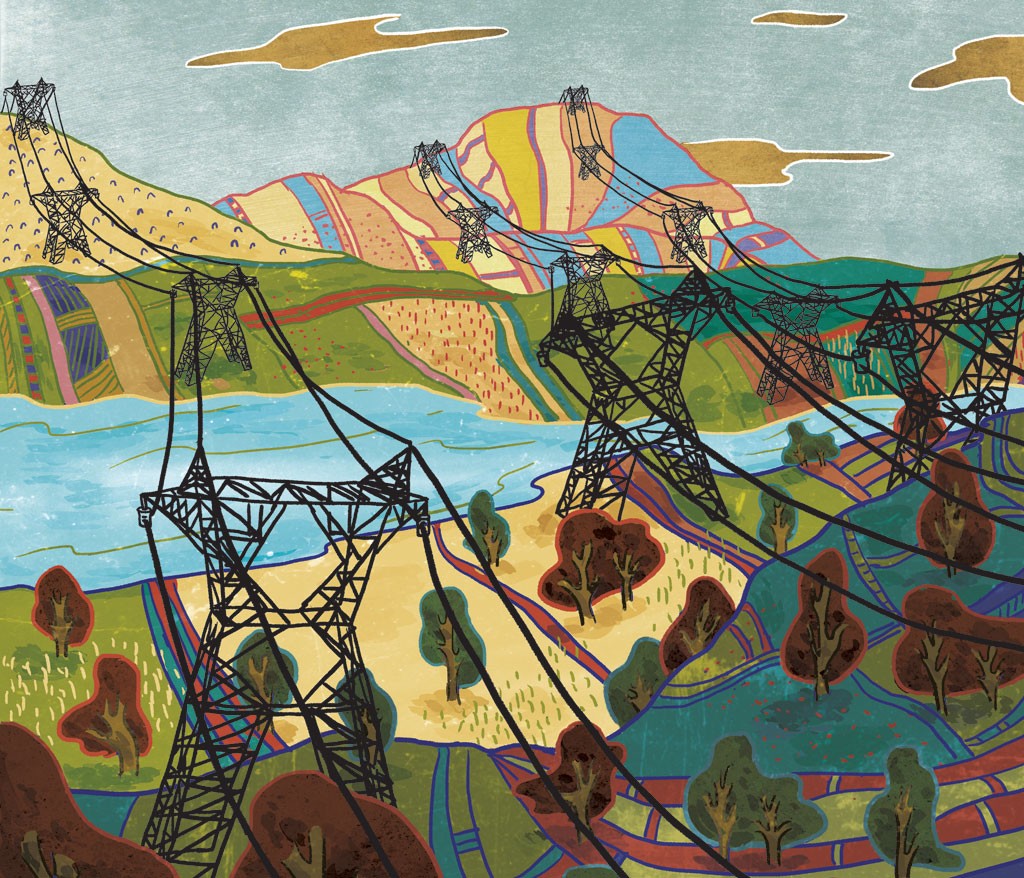 Large hydroelectric dams in the north of Québec are generating energy that is abundant and cheap. New England states and New York are clamoring for clean power that will help meet ambitious goals to cut greenhouse-gas emissions.

The push to get Canadian juice flowing south is generating a number of transmission-line projects in the northern New England region — wary conservationists have nicknamed it the "railroad wars," a reference to the race to construct railroads crisscrossing the country in the 19th century.

Christophe Courchesne, a staff attorney with the Conservation Law Foundation in New Hampshire, compared "this phase of the energy development" to the "Wild West."

Vermont isn't the target customer for all of this power; it's largely intended for more populated parts. But the Green Mountain State could serve as the gateway — a prospect that has some in Vermont asking, "How will it benefit us?"

Just as developers are chomping at the bit to get under way, a few critics are raising concerns about the environmental impacts of large-scale hydropower. Others worry that by flooding New England's electricity market with cheap hydroelectricity, the new transmission lines could discourage development of renewable energy projects closer to home.

CLF's Vermont director, Chris Killian, suspects that the construction of the proposed transmission projects could happen rapidly — within a matter of years — which is "pretty fast" in the power sector.

He encourages Vermonters to pay attention, and not just because the state could be a thoroughfare for the north-south power lines.

"They're representative of a very significant transformation in our electric power system," said Killian.

The project closest to home is also one of the newest on the scene. If approved, the New England Clean Power Link would carry electricity an estimated 150 miles from the Canadian border to Ludlow, Vermont, through two buried, six-inch-wide cables. Approximately 100 miles of the line would be installed four feet under Lake Champlain. The rest would be buried beneath dry land, largely in existing rights of way.

The Clean Power link comes with a $1.2 billion price tag. That would be borne by the developer, Transmission Developers Inc., which is backed by a private equity giant, the Blackstone Group.

TDI is also behind the Champlain Hudson Power Express, a similar project that will ferry power from Canada to the Big Apple via lines under the Hudson River and the New York side of Lake Champlain. New York approved the project last year, and TDI expects the line to be in service by the fall of 2017.

"We were listening to what the market was telling us," said Don Jessome, TDI's chief executive officer.

What he was hearing was that New England governors were hungry for more Canadian hydropower — primarily because that power could cut carbon dioxide emissions in their states. New England's fossil-fuel plants are aging. Twenty-eight coal- and gas-fired plants — representing more than 25 percent of the region's electricity-generating capacity — will be close to retirement by the end of the decade. Natural gas already comprises nearly 50 percent of New England's total electricity generation; observers warn too much reliance on a single source of electricity could be problematic for the region.

Vermont Yankee was the "last piece that fell into place," said Jessome. When TDI heard that the nuclear plant would be going offline later this year, the developers saw an opportunity to "take all the knowledge we learned in New York and convert it into a project for the New England power market."

Vermont Department of Public Service Commissioner Chris Recchia said that if Vermont ends up hosting a transmission project, he and the DPS will make sure it's a good deal for this state. The Clean Power Link will need to earn a certificate of public good before any construction can begin. Recchia said the state could benefit from the tax revenues of such a project. It would also reduce electricity prices across New England, where prices are currently among the nation's highest.

TDI isn't the only developer on the scene. In neighboring New Hampshire, a subsidiary of Northeast Utilities is working to build the Northern Pass transmission line, a $1.4 billion above-ground line that would run from the Canadian border to a converter terminal in Franklin, N.H.

And in Maine, developers are proposing a 230-mile underground line that would deliver power from Canada, as well as northern and eastern Maine, to southern New England.

The New England States Committee on Electricity ran an analysis last year looking at three hypothetical 1,200-megawatt transmission lines, and estimated that New England customers could save between $3.3 and $5.6 billion in electricity costs.

When it comes to the Clean Power Link specifically, TDI is estimating that the project would generate $2 billion in savings over the first 10 years of operation, $100 million of which would be realized in Vermont.

The Northern Pass project is promising even greater savings for the people of New Hampshire: 1,200 new jobs during construction, $1.1 billion in new tax revenues over the 40-year life of the project, and between $20 and $35 million in energy cost savings each year. But Granite State residents aren't sold on it, according to Courchesne of CLF in New Hampshire. He said the project developers "completely screwed up the rollout of the project" and incited the wrath of New Hampshire conservationists and neighbors in the process. Opponents worry about how the construction of the new infrastructure could affect sensitive and scenic habitats; the project calls for high-voltage lines suspended between towers that could be as tall as 135 feet.

TDI's projects, which use buried lines along existing rights of way, haven't sparked the same kind of opposition. Even so, some conservationists and activists are asking big-picture questions.

Courchesne, for one, doesn't believe the build out has been properly vetted. "Jumping headlong into new transmission" — when the benefits are limited or uncertain — "is really not a smart energy policy," he said.

Other activists take issue with hydroelectricity itself. Alexis Lathem, a writer and teacher from Richmond, said she visited indigenous communities in northern Québec in the 1990s and returned in 2012 to see what had happened in the 20 years since.

"It looks like the frontier," she said. First came the hydroelectricity dams, she said, followed by other industries that thrive on cheap power and abundant natural resources: pulp mills, mining operations and smelters. Indigenous communities that used to have free reign in vast territories now live surrounded by fast-food chains and transmission lines.

"What's wrong about this is that it's 'out of sight, out of mind,'" said Lathem, who objects to Vermonters exporting the side effects of their electricity consumption to other communities.

Keith Brunner, an organizer with Rising Tide Vermont, agrees. Too often the climate change debate is just framed in terms of carbon emissions and greenhouse gases, Brunner said. By those metrics, big hydro might be good news. But the "technocratic" approach doesn't tell the whole story, he said. "It's not acceptable to have these ideas of, 'We're just going to write off communities as sacrifice zones.'"

Québec's leaders have, in recent years, rolled out an ambitious plan for developing the northern reaches of the province, which include additional hydroelectricity generation, mining and resource extraction.

CLF's Killian said Hydro Québec is lobbying in states like Massachusetts and Connecticut for large-scale hydroelectricity to count towards renewable portfolio standards. RPSs, as they're known in industry shorthand, require electricity-supply companies to produce a certain percentage of their electricity from renewable energy sources. They can meet those standards by buying energy certificates from certified generation facilities, such as wind or solar farms.

But large-scale hydropower is cheaper than wind or solar power. If that power qualified for various RPSs, say critics like Killian, the incentive to build smaller-scale, local renewable energy projects would evaporate.

"Yes, it is true that just on a sort of lay definition basis, hydropower, water power, is a renewable fuel," Killian said. But including large-scale hydro, he believes, "undermines, and arguably eviscerates, the purpose of the renewable portfolio standards."

Last month, two Massachusetts lawmakers introduced legislation that would, for the first time, classify large-scale hydroelectricity as renewable energy. The bill's backers, including Gov. Deval Patrick's administration, say hydroelectricity needs to be part of the mix if the state is going to meet its goal of cutting greenhouse-gas emissions 25 percent below 1990 levels by 2020.

Vermont, though it doesn't have RPSs, has already categorized big hydro as "renewable."

Jessome agrees that small-scale renewable projects are important — but argues hydro generation, which can be ramped up or down quickly and easily, fits nicely with intermittent power generation sources such as wind and solar. If New England states want to meet the goals they've set for cutting greenhouse-gas emissions, Jessome said, "hydro has to be part of the story."