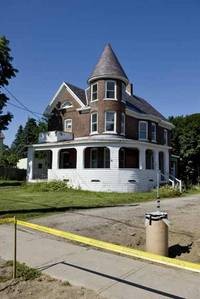 BURLINGTON — For more than 20 years, the Women’s Rape Crisis Center has operated as an underground operation of sorts, literally and figuratively. As its name suggests, the WRCC primarily serves female survivors of sexual violence out of a tiny, rented basement in Burlington’s South End. The nonprofit, which operates a 24-hour rape crisis hotline and holds individual and group meetings with survivors, doesn’t advertise its location, partly to protect clients’ privacy and safety.

But the high-profile rapes and murders of Burlington residents Laura Winterbottom and Michelle Gardner-Quinn in the last two years suggest it’s time Vermont’s biggest city brought the issue of sexual violence into the open.

Last spring, it looked as though the stars were all aligning for the WRCC to move into a more visible location. The group received a sizable donation from a generous benefactor. Then Bernie Beaudoin, a 76-year-old lifelong Burlingtonian, approached the group with an almost unheard-of offer: He agreed to sell them his house at 336 North Avenue at its assessed value rather than market value — a $40,000 discount — and finance the deal at no interest for two years. In effect, the WRCC would have lower monthly mortgage payments than its current rent. As Executive Director Cathleen Wilson puts it, “Bernie kind of fell from the heavens for us.”

Moreover, the 3200-square-foot Victorian offers nearly three times the space of the WRCC’s current quarters, and in a more desirable location — midway between the Burlington Police Department and Burlington High School. As the former home of the Vermont Women’s Health Center, which vacated four years ago, the 108-year-old building retains all the old clinic fixtures and has its own parking lot.

But here’s the rub: When Beaudoin declared the house as a “homestead” on his tax returns, the zoning automatically reverted from its previous status as a “non-conforming commercial” use to “residential low-density.” According to Wick, that designation all but precludes the WRCC from occupying the building.

At first glance, the problem seems to have an easy fix: Ask the city to re-zone the land or issue a zoning variance. After all, the lot immediately adjacent to the south is already zoned for commercial use: A new Shell station and convenience store are under construction there. Moreover, according to Wilson, none of the neighbors, including the Catholic Diocese of Vermont directly across the street, has expressed objections to having the rape crisis center as a neighbor.

All that’s needed now is some city official who’s willing to pounce on this political football and run with it. However, with city council and the mayor’s office preoccupied with bigger zoning woes — namely, the budget-issue-plagued zoning rewrite — no one has stepped forward to champion this cause. In the meantime, the clock is ticking for the WRCC.

Bernie Beaudoin, a retired barber, antiques dealer and property manager, was born just seven doors down from the house he is selling at a drastic discount. His only reservation about his offer is that he might need the money for medical care — Beaudoin doesn’t have health insurance.

Over the years, Beaudoin has owned several properties in Burlington, including the two on Bank Street that later became A Single Pebble restaurant. None, however, has a history to rival the one at 336 North Avenue. On a recent Thursday morning, Beaudoin gave Seven Days a tour of the house, which for decades housed the Vermont Women’s Health Center. “They called it that,” Beaudoin says, “but really it was an abortion clinic.”

As Beaudoin opens the back door, it’s immediately obvious the building hasn’t been a home for more than 30 years. It lacks a kitchen and a full bathroom. Most of the rooms still retain a clinical, examination-room décor, with small sinks and sterile-looking, overhead fluorescent lights. Beaudoin rarely slept there, staying instead at the home of an elderly aunt who suffered from frequent panic attacks.

One closet-size room looks like it was once a drug dispensary; another, a supply closet. Only the west-facing rooms, with their large bay windows, wood molding and wainscoting, look anything like bedrooms. “I only slept here a dozen times in four years,” Beaudoin says. “I didn’t do nothing to this place.”

Back in the 1970s, the Vermont Women’s Health Center was a national focal point for anti-abortion protests. The clinic first opened its doors in Colchester in 1972, a year before the landmark U.S. Supreme Court case Roe v. Wade legalized abortion. In 1977, following a fire at the health center’s downtown location, the clinic moved into 336 North Avenue. According to Nancy Sabin, the previous owner, “The realtor was so against abortion that she wouldn’t dare call us.” Sabin not only sold to the organization, she told the realtor on the day of the closing she’d write a check to the center for $3000. “It blew her mind,” Sabin recalls.

Rachel Atkins, who until last week worked at Planned Parenthood of Northern New England, joined the Women’s Health Center in the mid-1970s; the two organizations merged in 2000. She recalls protesters from Operation Rescue and Vermont Save-A-Baby “invading” the clinic and chaining themselves together in the hallway. One Easter weekend, she remembers, a Molotov cocktail was thrown through the front window.

When we left, we were always hoping that the health center would continue to be a nonprofit,” Atkins says. “A nonprofit serving women would be a lovely extension of our time there.”

Whether that will happen remains to be seen. Jeff Wick, one of the attorneys who’s handling this case pro bono, says it’s “highly unlikely” the house will qualify for a variance. However, the WRCC could also apply to the Development Review Board for conditional use of the house as a community center. “That seems to be the only avenue of hope under the current ordinance,” Wick surmises.

Bradley at Pomerleau Real Estate suggests that the success of this deal may hinge on a political rather than a legal solution — that is, someone in City Hall needs to take up this cause on behalf of the WRCC. “Legally, this goes against the grain,” Bradley admits. “But let’s figure out a way to do it, because we can all agree that there’s a need in the community.”

For his part, Mayor Bob Kiss sounds sympathetic but noncommittal. “The issue is pretty clear,” he says. “It’s just whether or not there’s an acceptable way to pursue this . . . From my own perspective, not being a neighbor, it’s a perfect place.”

Likewise, City Council President Kurt Wright (R-Ward 4) admits that the issue is “on our radar screen,” though he can’t offer specifics about what, if anything, the council will do.

For her part, Wilson at the WRCC is surprised city officials aren’t taking a more active interest in this relocation. Last year, the WRCC served 602 sexual assault survivors, a 40 percent increase over the last two years alone. Moreover, the Center provided more than 40 free prevention workshops to students at Burlington High, which is within walking distance of the proposed location.

Meanwhile, the WRCC struggles with limited space — four offices for 12 employees, with no private consultation rooms for survivors or group sessions. The basement location also has serious mold issues. “It’s frustrating that people are missing the big picture in all this,” Wilson adds. “This isn’t about me getting a nicer-looking office with a window. It’s about the needs of this community.”

A city council hearing on the issue is tentatively scheduled for Monday, August 6.