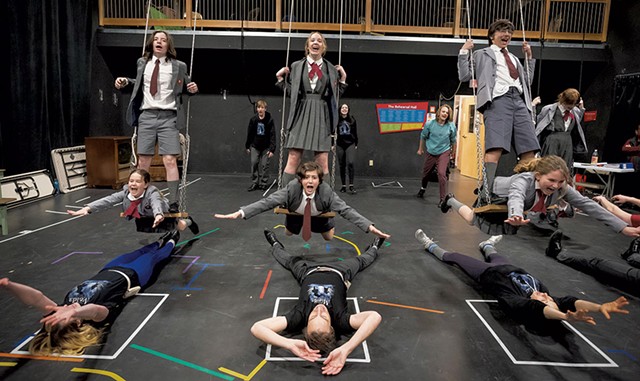 Fully costumed in school uniforms of short pants, knee socks, pleated skirts, ties and blazers, the young cast of Lyric Theatre's Matilda the Musical buzzed around the community theater group's offices in South Burlington. Gathering for a Monday night rehearsal a couple of weeks ahead of the play's April 7 opening at the Flynn Main Stage in Burlington, the kids created a cacophony of sound that bounced off the warehouse walls and floor. Unapologetically keyed up, they were kids being kids, rehearsing a show with themes that examine the resiliency of children.

Adapted from the 1988 Roald Dahl novel, Matilda centers on a young girl with burgeoning telekinesis who endures bullying from her abusive parents and domineering headmistress. The musical debuted on London's West End in 2011. It hit Broadway two years later.

After vocal warm-ups, the players took their places for "When I Grow Up," an ensemble number that utilizes four playground swings suspended from the 24-foot ceiling. Their long chains created broad arcs as the kids began to glide through the air, adding a dreamlike, nearly slow-motion quality to the scene. Similarly dreamy, the song's lyrics describe hopes and wishes about what life might be like when its singers reach adulthood.

The children muse about, when they're older, being "smart enough to answer all the questions that you need to know the answers to" and "strong enough to carry all the heavy things you have to haul around with you." Watching from the corner as they sweetly harmonized, I fell down a mental rabbit hole about what the past two years must have felt like for kids. COVID-19 forced them all to grow up faster than they should. How many years (decades?) will elapse before the pandemic's impact on their generation is fully understood? I had full-body chills.

Matilda was originally scheduled to open in April 2020. Like all Lyric shows, planning began about 18 months ahead of its original production date, meaning the musical is now more than three years in the making. In the past two years, the company has shown flexibility, endurance and creativity as it has adapted to the disrupted performing arts world. Matilda marks a return to normalcy and a triumph for the theater group.

"I don't think it was ever even an option for us to not do it." Erin Evarts tweet this

Postponing Matilda was a first for Lyric and extremely painful, since rehearsals stopped only a few weeks before curtain. Never in its almost five decades had a show been canceled or delayed.

"There was no playbook," the company's executive director, Erin Evarts, said about shutting down production. A longtime member of Lyric serving in many capacities, Evarts took the top slot in March 2019.

"When I started talking to other arts executives and cultural leaders, we were all like, 'Huh? What's next?'" she continued. "Nobody had an answer."

But that didn't mean they would be idle, Evarts explained. The City of Burlington reached out to Lyric to see if the volunteer-run organization could help make masks. Utilizing hundreds of helping hands in its network of crafty folks, Lyric produced approximately 27,000 cloth masks, which were distributed all over the Queen City in the pandemic's early days.

Though traditional indoor theater was out, Lyric found ways to stay busy and produce work. From fall 2020 through New Year's Eve 2021, Lyric produced eight small-scale shows. They ranged from solo-heavy outdoor concerts such as "New Leaf," performed in Stowe, South Hero, and Burlington in September and October 2020, to Looking for the Heart of Saturday Night, a dance musical performed live at Lyric headquarters in November 2021. 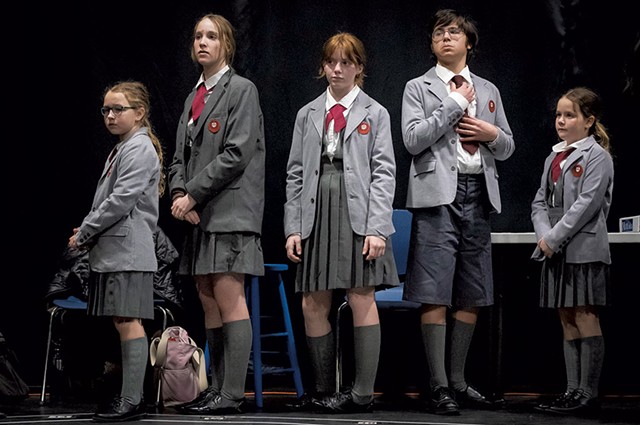 Meanwhile, Matilda was, quite literally, waiting in the wings. Set pieces sat untouched, and its cast and crew patiently twiddled their thumbs. At no point did Evarts consider scrapping the show.

"When you have something that's sitting there and ready to go, it felt wrong to move on and do something different," she said. "I don't think it was ever even an option for us to not do it. Or, at least, it wasn't for me."

The cast remained largely intact, though its youngest members shot up a few inches. Director Ian Ferris said that when rehearsals resumed in November 2021, he had to make sure the kids could still fit in their classroom desks, lest they need to be rebuilt.

Several adult cast members chose not to return, mainly because of pandemic-prompted life changes. Auditions were held again in January to replace the outgoing actors and add a few more.

Phoebe Raphael, 13, who plays Matilda, said she felt like a great deal of time had passed and that she's "definitely changed a lot in that time.

"I kind of feel like a different person," she continued. "I feel like [the show] is going to be 10 times better now."

"She was great two years ago — she's better now," Ferris said of Raphael. "There's just a little more texture to some of her work."

Raphael said remembering everything about the show was challenging but not impossible.

"The blocking was completely gone," she said. "But once we got comfortable, it became such a great experience."

Ferris and Raphael pointed to one song, "Quiet," as a part of the show that's benefited from the time away. Ferris described it as Matilda's emotional peak.

"[Matilda's] been building up these emotions ... It all kind of bursts, but in a calm way," Raphael explained. "I feel like I can kind of relate to that song a little bit more than I could two years ago."

Ferris said keeping morale high and the cast connected was paramount during the hiatus. A few months in, he organized and edited together a virtual choir rendition of "When I Grow Up," with each cast member recording their part separately.

Ferris and Raphael stressed the importance of bonding between castmates. Raphael mentioned that her parents recently reminded her that, upon the show's initial cancellation, she told them she wasn't as sad about losing the role as losing her Lyric family.

Though he certainly had the opportunity, Ferris said he wasn't tempted to retool the show, though it was hard to shut his brain off and let it lie.

"I could have redesigned the show six times in the downtime we had," he said. "But I didn't want to create a domino effect of changing all sorts of design stuff."

For Evarts, the pandemic's challenges tested her mettle in a role she'd been working toward for years. She quoted the show's song "Revolting Children" as a metaphor for the company's malleability. The song plays up the two meanings of the word "revolting": one an adjective, the other a verb.

"[The line] keeps resonating," Evarts said. "These are revolting times. And we got through it."

The original print version of this article was headlined "Child's Play"